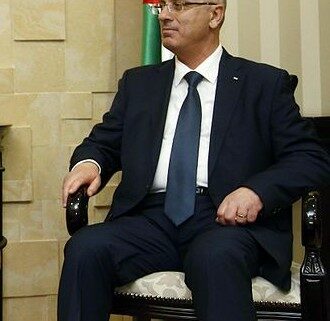 Rami Hamdallah was born in 1958 near Tulkarem. On 2 June 2013, President Mahmoud Abbas appointed him as prime minister of the Palestinian Authority, succeeding Salam Fayyad. In June 2014, he headed a short-lived government of national consensus endorsed by Hamas. Hamdallah resigned on 28 January 2019 and was replaced as prime minister by Mohammad Shtayyeh.

Hamdallah spent most of his career in academia, primarily at al-Najah National University in Nablus: initially appointed as chair of the English department in 1988, and then serving as university president from 1998 until 2013.

In March 2018, Hamdallah was the target of an assassination attempt while visiting the Gaza Strip along with Majed Faraj, the head of the PA’s General Intelligence Service (GIS).

Photo by Ausrian Federal Ministry for Europe, Integration and Foreign Affairs via flickr. CC BY 2.0.