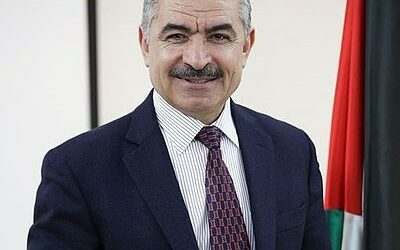 Mohammad Shtayyeh, born in 1958 in Nablus, was appointed prime minister of the Palestinian Authority (PA) on 10 March 2019. He succeeded Rami Hamdallah.In addition to his prime ministerial position, he is also minister of interior and ministry for Waqf and Religious Affairs.

Shtayyeh was elected to the Fatah Central Committee in 2009, heading the Economic Commission, and the Commission for Political Mobilisation. He has a close relationship with Mahmoud Abbas and has been deeply involved in peace negotiations with Israel, from the 1991 Madrid peace conference where he helped establish negotiating parameters, to the US-led talks mediated by John Kerry in 2013-2014. Shtayyeh was twice minister of public works and housing between 2005-2006, and 2008-2010.

Although historically a supporter of the two-state solution, he warned in January 2017 that it may not survive Donald Trump’s policies.