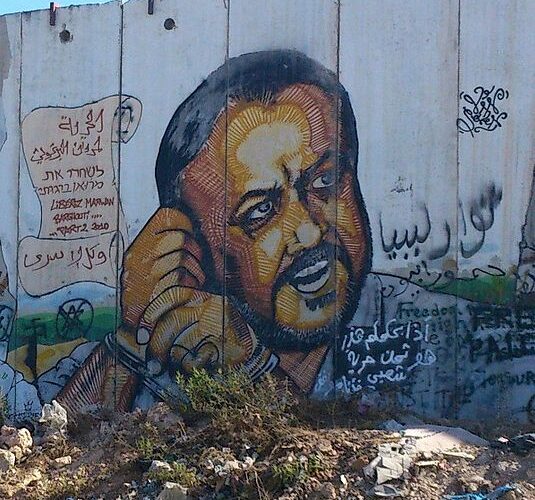 Marwan Barghouti, born in the West Bank village of Kobar in 1962, is a prominent and popular political figure associated with Fatah, currently serving five life sentences in an Israeli prison. He is a member of the Fatah Central Committee, and of the Palestinian Legislative Council (PLC) between 1996-2018. Often described by Palestinians as the ‘Palestinian Mandela’ he is viewed as one of the strongest leadership candidates to succeed Abbas.

IIn the run-up to the First Intifada, Barghouti was a student leader at Bir Zeit University involved in popular protests. He was deported by Israel to Jordan in May 1987 and was only allowed to return to the West Bank in 1993 as part of the Oslo Accords. The following year, in 1994, he became secretary-general of Fatah in the West Bank. During the Second Intifada, he led Fatah’s Tanzim faction and allegedly directed military attacks against Israeli targets. Israel also accuses him of establishing the al-Aqsa Martyrs Brigades (AMB) at the time.

Barghouti was arrested and sentenced by an Israeli military court in 2002 to five consecutive life sentences for orchestrating attacks on Israelis.

Since his imprisonment in 2002, Barghouti has been active in the prisoners’ movement and has published various articles from prison to communicate with the outside world. In 2006, he helped draft the Prisoners’ Document for National Accord, and most recently in 2017, led a large-scale hunger strike to demand improved rights and conditions for prisoners.