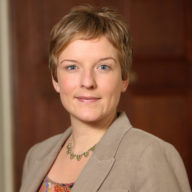 Almut Möller is a senior policy fellow and has been head of the Berlin office of the  European Council on Foreign Relations since October 2015. She has published widely on European affairs, foreign and security policy, and Germany's role in the EU, and is a frequent commentator in the German and international media.

Möller started her career in the think tank world at the Centre for Applied Policy Research at LMU University in Munich and then worked as an independent political analyst in London, focussing on EU-Middle East relations. Before joining ECFR she led the Europe programme at the German Council on Foreign Relations. Research fellowships have taken her to Renmin University of China in Beijing, the Al Ahram Center for Political and Security Studies in Cairo and the American Institute for Contemporary German Studies (AICGS) at Johns Hopkins University in Washington, D.C., where she continues to engage as a non-resident fellow.

Möller is a member of the extended board of Women in International Security (WIIS.de) as well as a member of the Strategic Council of the European Policy Centre (EPC) in Brussels. She is also an experienced conference moderator and facilitator.

The three eras since reunification

Untapped potential: How new alliances can strengthen the EU

Political leaders are jostling for space in a crowded field. But German voters appear to be enjoying the show

ECFR’s newly released Cohesion Monitor charts a decade of upheaval in Europe – and reveals that European cohesion is now, in fact, stronger than in the pre-crisis year of 2007

Can Slovakia and the Czech Republic overcome Europe’s east-west divide?

Bracing for Brexit: Could ‘no deal’ chaos spread to Germany?

Untapped potential: How new alliances can strengthen the EU

In the federal election year, Germans are ready to give new European solutions a strong boost and take more risks

Leading from the centre: Germany’s role in Europe

Berlin does not want to dominate Europe, but to exercise leadership via EU institutions - something that will be essential in a post-Brexit world

The three eras since reunification

Political leaders are jostling for space in a crowded field. But German voters appear to be enjoying the show

ECFR’s newly released Cohesion Monitor charts a decade of upheaval in Europe – and reveals that European cohesion is now, in fact, stronger than in the pre-crisis year of 2007

Can Slovakia and the Czech Republic overcome Europe’s east-west divide?

Bracing for Brexit: Could ‘no deal’ chaos spread to Germany?

Having previously been a strong supporter of European integration, Rome's current dissidence within the EU has led to a dramatic weakening of cohesion between Italy and other EU member states

Czechs and balances: can Berlin shake up the Visegrád group?

Having so far ignored the Czech Republic's interest in working with it, Berlin has a chance to help the country join new coalitions

An awkward embrace: Erdoğan in Germany

As the economic crisis in Turkey intensifies, Germany should decide whether and how it wants to help

Portugal: A good European in search of friends

Portugal has at times punched above its weight in modern EU history. But it needs new friends if it is to do so again

The future shape of Europe

A critical mass of countries agree on the need for more flexible cooperation, but what could it look like?

Britain in Europe: So near yet so far?

Almut Moeller and Susi Dennison discuss the Britain in Europe Renegotiation Scorecard, and how the fourth basket around migration can be moved forward

Anthony Dworkin steps in for Mark Leonard and speaks with Almut Möller, Manuel Lafont Rapnouil and Tom Nuttall about how significant the new treaty of friendship…

The Idlib crisis – Can Turkey and Europe avert disaster?

Macron: one year on

Mark Leonard speaks with Manuel Lafont Rapnouil, Almut Möller and Vessela Tcherneva, about what has changed in French foreign policy with Macron one year in…

Mark’s World in 30 Minutes: German-Turkish Spat: a Storm in a Tea Cup?

ECFR’s World in 30 Minutes: Merkel – the leader of the free world?

ECFR’s World in 30 Minutes: The blocking of CETA

ECFR’s director Mark Leonard speaks with Almut Möller, head of ECFR’s Berlin office, and François Godement, director of the Asia and China programme, about the…

Head of the Berlin Office, Almut Möller, in an interview with Süddeutsche Zeitung on what it takes to become a good EU Commissioner.

Head of the Berlin Office, Almut Möller, talks on Deutschlandfunk about Brexit, the American Afghanistan strategy and more.

Almut Möller is quoted by the Irish Times on the position of Germany in the Brexit negotiations.