Since joining the European Union in the mid-1990s, Finland has embraced the opportunities of membership more energetically than any other Nordic country. Unlike Denmark and Sweden, Finland has adopted the euro. The 1,300-kilometre Finnish border with Russia shapes much of Helsinki’s outlook on European security. As my ECFR colleagues Susi Dennison, Ulrike Franke, and Pawel Zerka showed in a pan-European security assessment published in July 2018, Finland has a strong interest in maintaining a NATO presence in Europe (despite not being a member of the Alliance) and has close defence ties with the United States and Sweden. As data ECFR gathered earlier this year demonstrates, Finland’s interest in the EU pillar of European security is equally strong.

Despite having a broadly sceptical attitude towards further European integration, Helsinki remains at the core of current integration efforts. Finnish EU policies reflect an intense interest in engaging with Germany, a country that is key to shaping the overall direction of the Union. However, Berlin does not prioritise efforts to reach out to Helsinki. 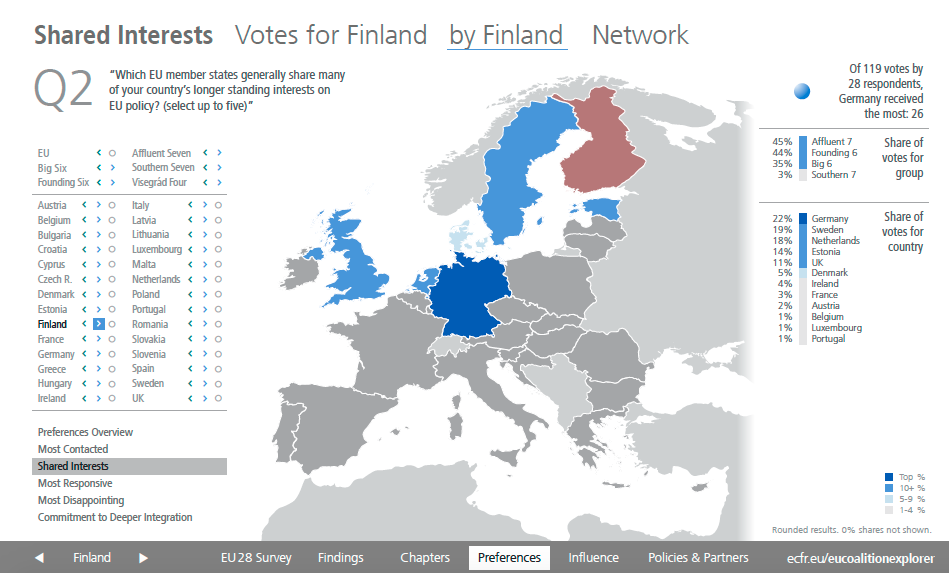 Being at the geographical periphery of the Union usually makes it difficult for a member state to build networks across the EU. But Finland benefits from cooperation between countries in the Baltic region. ECFR’s latest EU Coalition Explorer – based on a survey of almost 900 European policy analysts and policymakers spread across all 28 member states – demonstrates Helsinki’s strong and balanced relationship, and many shared interests, with Sweden. Despite being a relatively small member state outside the eurozone, Sweden has the seventh strongest network of contacts in the EU. Thus, Helsinki has an asset in this friend with many friends, which could significantly increase its clout within the EU.

Links with Denmark are also central to Finland’s network of contacts – albeit somewhat less relevant due to the countries’ diverging interests. Across the Gulf of Finland, Tallinn is keen to reach out to Helsinki but receives only a moderate response to this interest. Finland is more enthusiastic about deepening ties with the Netherlands – whose network of contacts is one of the most developed in the EU, including strong ties to Germany and, increasingly, France.

However, the Netherlands has shown no reciprocal direct interest in Finland, preferring to focus on a regional grouping that has recently been branded the “new Hanseatic League”. Launched in May 2018, this informal grouping of fiscally conservative EU members comprises Finland, Denmark, Estonia, Ireland, Latvia, Lithuania, and Sweden. As policy analyst Rem Korteweg pointed out in July this year, the new Hanseatic League is a cornerstone of the Netherlands’ plan to compensate for the loss of the United Kingdom as an EU partner. For the time being, the grouping is an ad hoc coalition that has a narrow European Monetary Union (EMU) agenda, aiming to temper French ambitions for eurozone reform.

Benefiting from strong Dutch engagement, the new Hanseatic League could be the amplifier Helsinki needs to engage with Berlin. Although the Netherlands has a strong and balanced relationship with Germany, Helsinki should be aware that Berlin views the new grouping with a measure of suspicion. While it generally shares the conservative, rules-based outlook of the Netherlands on eurozone governance, the German government is keen for other member states to support a coalition that will ultimately contribute to a compromise with Paris rather than block progress on EMU reform.

Against this background, it would be wise for Finland to continue to engage with Berlin in other ways. Launched in September 2018, a German Federal Foreign Office initiative involving countries that are like-minded in their commitment to the EU – Finland, Ireland, Denmark, and Sweden – provides a framework for such engagement. As ECFR’s data shows, this coalition could help Dublin deepen its relationship with Helsinki: Ireland is calling for greater cooperation with Finland, but has not received much of a response so far. Meanwhile, Helsinki could encourage Berlin to include Tallinn, one of its key partners, in the new initiative. This could provide a substantive response to Estonia’s attempts to reach out to Finland.

Helsinki could also bring Lisbon into this web of relationships. Portugal is another EU member that has a strong European vocation but struggles – more than Finland – with its location on Europe’s periphery. As it stands, Lisbon mostly relies on its strong relationship with Madrid to exert influence within the EU. In strengthening their relationship, Finland and Portugal could demonstrate that geography need not be a barrier to cooperation between EU members. For instance, Helsinki, Tallin, and Lisbon all see establishing a common EU digital policy as one of their top three priorities in the coming years – a shared interest that could be pursued through the German initiative involving like-minded member states.