The government in Rome is taking a tremendous risk. By challenging the budget rules of the Eurozone in an unprecedented way, Italy has made the headlines in Europe and beyond in the past few weeks. There is a great deal of uncertainty about how far the country’s ruling coalition – comprising the right-wing Lega and the left-wing Five Star Movement, led by Matteo Salvini and Luigi di Maio respectively – will go in its opposition to key EU policies in the weeks and months ahead. But one thing is for sure: Italy matters to the functioning of the Eurozone, and to EU measures for dealing with migration to Europe.

Despite its fundamental discontent with current EU policy, Italy has no intention of leaving the European Union. EU capitals, including Rome itself, have a joint interest in constructive engagement with one another to find common ground. But what is Rome’s standing with other EU capitals? ECFR’s new EU28 Coalition Explorer uses data-driven analysis to understand Italy’s network of partners and its clout within the EU.

Traditionally, Italy has been one of the EU members most committed to European integration, with the Italian public strongly favouring EU membership. Those were the days. Earlier this year, ECFR’s EU Cohesion Monitor – which, as the name suggests, examines the cohesion of societies and countries in the Union – found that Italy has witnessed the most dramatic loss of cohesion of any EU member state in the past decade. Today, the country’s level of EU cohesion is similar to that of the United Kingdom. 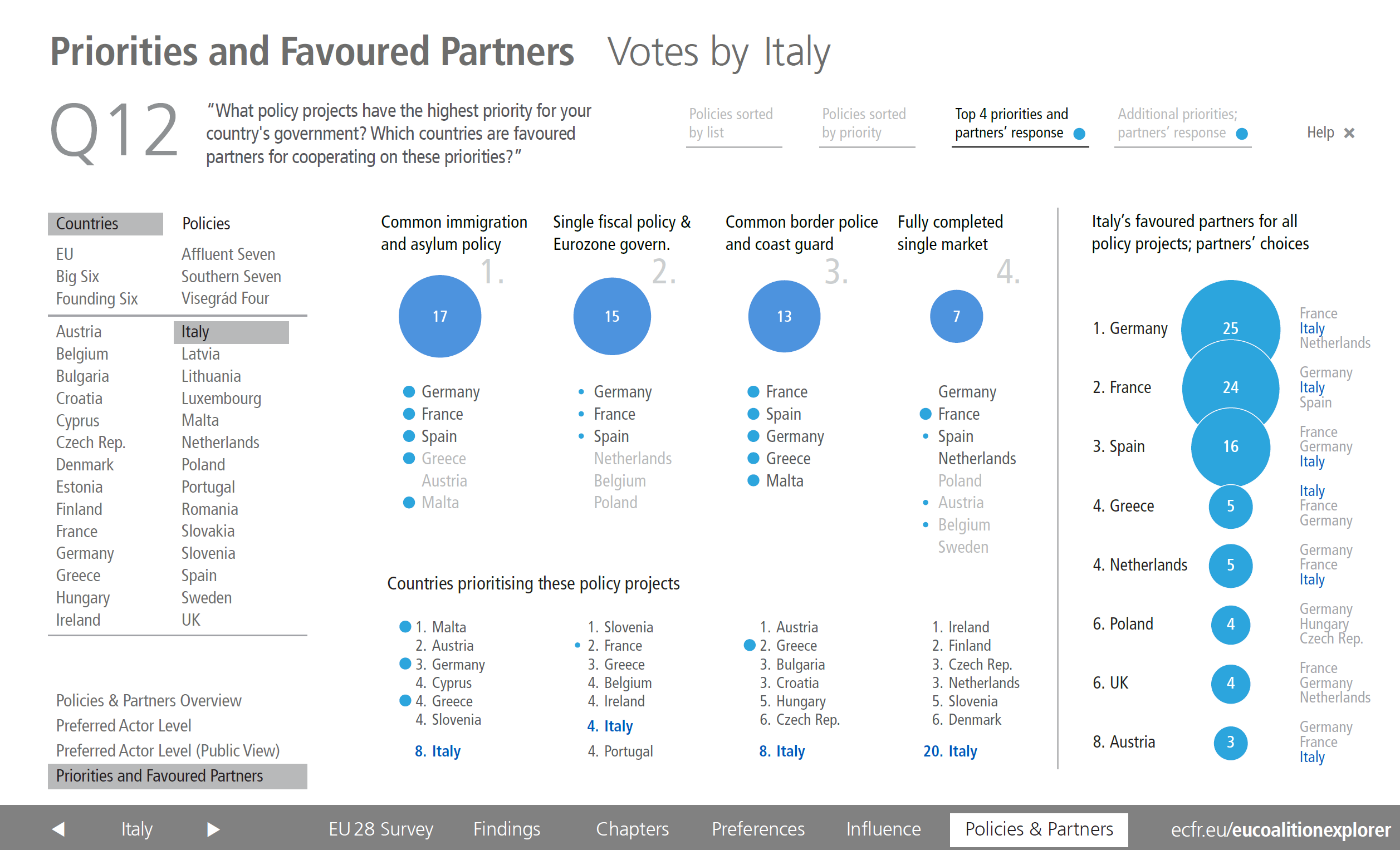 Analysis of ECFR’s pan-European data shows that Italy, a once-confident caretaker of European integration, is increasingly losing its EU vocation. The country is one of the largest member states, and as a founding member of the European community has had plenty of time to develop and strengthen its intra-EU ties. Yet, as ECFR’s latest survey of policymakers and analysts across the EU shows, Italy generally lacks mature partnerships with other EU member countries and focuses almost exclusively on western Europe.

Nonetheless, Italian respondents to the survey still tend to see their country as being at the heart of European integration, alongside France and Germany. They believe that these countries are the only EU member states more influential than Italy. In contrast, other EU respondents view Italy as less influential than (in descending order) Germany, France, the Netherlands, and the UK. The Italian view of Italy’s commitment to “more Europe”, or deeper integration, is also much more positive than the EU average.

Importantly, ECFR gathered this data during April-June 2018 and ended the survey shortly after the new coalition took office. It is likely that the coalition sees itself as less committed to “more Europe” than its predecessor, and that this shift is already reflected in the EU27’s views of Italy. It is also likely that other EU countries have since grown more disappointed in the country (for now, the three most disappointing member states are Hungary, Poland, and the UK).

In its engagement with other capitals, Rome is most interested in reaching out to Paris and Berlin, the main engines of European integration. But, so far, Paris and Berlin have only been moderately responsive. Similarly, they only moderately reciprocate Rome’s perception that it shares many interests with them.

Italy engages in relatively few interactions with other founding and Eurozone members such as Belgium and the Netherlands. Overall, Belgium has more interest in Italy than vice versa, while Italy has some unreciprocated interest in the Netherlands. Brussels and Rome both recognise that they have shared interests, but only to a limited degree. Compared to their counterparts elsewhere in the EU, Italian respondents are significantly less likely to see the Netherlands as influential.

Italy’s key partner is Spain: Rome contacts Madrid more often than any other EU capital aside from Berlin and Paris, while Madrid also sees Rome as its third-most-important point of contact (alongside Lisbon). Furthermore, according to ECFR’s survey, Italians and Spaniards have many shared interests and find one another relatively easy to work with.

Rome’s top three policy priorities are immigration and asylum, fiscal and Eurozone governance, and a common border police and coastguard. In all these areas, Italy could well find partners in France, Germany, Spain, and others, since all three policies are generally of strong interest across EU member states.

Analysis of ECFR’s pan-European data shows that Italy, a once-confident caretaker of European integration, is increasingly losing its EU vocation.

On common immigration and asylum policy, Rome primarily looks to Berlin, followed by Paris. Germany and France also regard the issue as a priority. They believe that Italy is an important partner in dealing with policy in this area (France more than so than Germany). Spain prioritises immigration and asylum, seeing Italy as one of its preferred partners on the issue.

Rome is most interested in working with Berlin on Eurozone governance, a policy priority they share. Although Germany was for years relatively uninterested in working with Italy in the area, this is now changing. However, policymakers in Berlin are realising that they need to build a functional German-Italian working relationship. The recent change of government in Italy will undoubtedly complicate the process.

ECFR’s survey shows that Paris, like Berlin, generally has less interest in working with Rome than vice versa. This may reflect hope among Italian respondents that the France of President Emmanuel Macron might offset Germany’s decade-long dominance of Eurozone matters. Belgium is another Eurozone member with a moderate interest in engaging with Italy in the area – an interest Rome reciprocates. Meanwhile, there is a strikingly weak link between Italy and the Netherlands, an otherwise key EU member, in dealing with Eurozone governance.

Needless to say, states’ interest in engaging with one another does not always make for a common direction of travel. Paris and Berlin may be reaching out to Rome more than they once did only because they have recognised their fundamental differences on the Eurozone, migration, and other joint challenges for the EU. As they do so, the general weakness of Italy’s coalition networks in Europe may be cause for alarm.