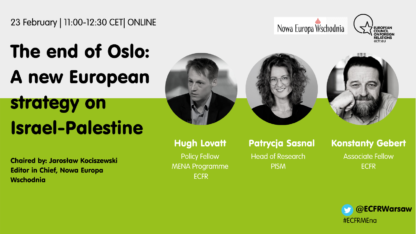 The Israel-UAE peace deal provides multiple wins for both countries, and for the US. But it could yet deepen the region’s political fault lines.

How to create the conditions for progress in Israel and Palestine

Human rights and international law should be a timeless part of addressing problems in Israel and Palestine, but the international community urgently needs to begin doing so once more

West Bank annexation will bring an end to the EU’s cherished two-state solution. International norms and the EU’s own laws will now need to underpin post-annexation relations with Israel.

A chance for accountability: Why Germany should welcome an ICC investigation into the situation in Palestine