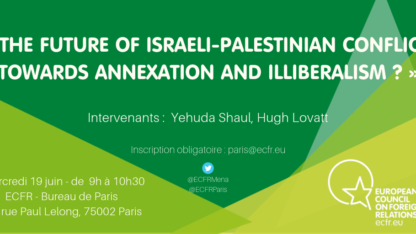 The future of Palestine: Youth views on the two-state paradigm

A quarter of a century on from the Oslo Peace Accords, young Palestinian writers share their views on the future of the two-state solution

An open letter by high-ranking former European Union officials urges Europe to reject a United States Middle East plan in the case that it promotes unequal rights between Israel and the occupied Palestinian territories. A number of ECFR Council Members have signed it.

Amidst allegations of fraud and bribery, Israeli PM Netanyahu has called for a snap election on 9 April. In what direction could a new Israeli government take its foreign policy?

Is Gaza once again on the brink of war?

Mali, Algeria, and the uneasy search for peace

This summer, Ibrahim Boubacar Keita was re-elected to Mali's presidency; his plan for peace in the country can stem the conflict, but as the Algerian case shows, the process of reconciliation can be daunting