Internal responses to the refugee crisis

Seven Syrians discuss how Europe can improve its approach to Syria 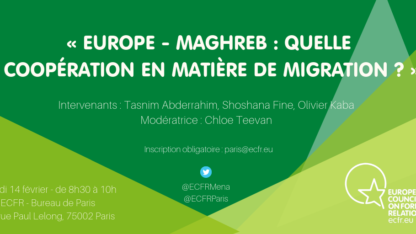 Migration Cooperation across the Mediterranean

Following the launch of Tasnim Abderrahim's paper on migration in the mediterranean, the ECFR Berlin is hosting a lunch time event to discuss European cooperation with North Africa.

Matteo Salvini has launched the "League of Leagues" - an alliance of nationalist parties across the continent. And he brings friends.

Far from leading to substantive reforms, Rome’s new line on immigration risks deepening the rift in the EU