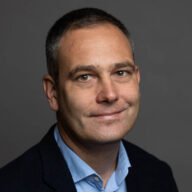 Gustav Gressel is a senior policy fellow with the Wider Europe Programme at the European Council on Foreign Relations’ Berlin office. His topics of focus include Russia, Eastern Europe, and defense policy.

Before joining ECFR, Gressel worked as a desk officer for international security policy and strategy in the Bureau for Security Policy of the Austrian Ministry of Defence from 2006 to 2014, and as a research fellow of the Commissioner for Strategic Studies with the Austrian MoD from 2003 to 2006. He was also a research fellow with the International Institute for Liberal Politics in Vienna. Before his academic career he served five years in the Austrian Armed Forces.

Gressel holds a PhD in Strategic Studies at the Faculty of Military Sciences at the National University of Public Service, Budapest and a Masters Degree in political science from Salzburg University. He is the author of numerous publications regarding security policy and strategic affairs and a frequent commentator on international affairs. His opinions have appeared in media such as the New York Times, the Guardian, Die Welt, NZZ, Bild, the Diplomat, New Eastern Europe, Foreign Policy, Gazeta Prawna, Rzeczpospolita, Kyiv Post, the Moscow Times, Capital, the Telegraph, the Economist, Newsweek, Deutsche Welle, RTL, al Jazeera, TVP, TRT, Polskie Radio, RFI, FM4, Ukraine Today, and Radio Free Europe.

In post-Maidan Ukraine, failing governmental action is substituted by voluntary work. While the Ukrainian state is failing in many aspects, Ukrainian society is very strong.

Kyiv and the regions

Ukraine has been an over-centralised state since its independence from the Soviet Union, but now the notion of “decentralisation” has taken hold in even tiny villages

The politics of history: how the perception of WW II shapes political debates on Eastern Europe

Peace in Europe can be based only on equal rights to social, political, and economic development for all

Germany and the Eastern Partnership: the view from Berlin

A resumption of Russian military provocations is likely, to keep Ukraine destabilised and maintain pressure on its government

Conservatives say Germany should pursue Bismarck’s policy of placating Russia, but a Bismarck of today would have a wholly different strategy

View from Vienna: Austria is again on the sceptical side

Austria is still sceptical about sanctions, but it will not challenge the bigger EU states without support

Crisis diplomacy and the Russian-Ukrainian war

The EU should conclude a security compact with Ukraine. Such an agreement would help the country defend itself against Russia and maximise the effectiveness of European military support.

Waves of ambition: Russia’s military build-up in Crimea and the Black Sea

Guarding the guardians: Ukraine’s security and judicial reforms under Zelensky

The EU, US, and NATO must ensure that these services remain high in the minds of the Zelensky administration and of Rada members

More tortoise, less hare: How Europeans can ramp up military supplies for Ukraine in the long war

Ukraine needs to move to a new phase of the war if it is to reclaim its territory occupied by Russia. A European plan to supply Leopard tanks should be at the heart of this effort.

Russia is the first state to use nuclear threats as part of a war of expansion. Unless it loses in Ukraine, the world will become a far more dangerous place.

Ukraine: Time for the West to prepare for the long war

Russia is drawing on its Syria playbook and regrouping for a long war to seize the whole of Ukraine. The West needs to take action now to supply Ukraine with Western equipment.

Out of the dark: Reinventing European defence cooperation

Russia’s all-out war on Ukraine has convinced many European states to rebuild their militaries. In doing so, they should initially focus on readiness, capability gaps, and joint equipment procurement and research.

The Kremlin’s secrecy in waging war on Ukraine has created severe problems on the battlefield. Inadequate force generation seems responsible for many of these problems.

Decisive days: How the West can help Ukraine survive

The coming days may determine whether Ukraine can preserve large parts of its army as a functional fighting force. In this crucial period, every shred of military support will count.

Signal and noise: What Russia’s nuclear threat means for Europe

The Kremlin instrumentalises fear of nuclear war to make others bow to its ambitions. The West and Russia have often supported different factions in conflicts without sliding into a nuclear conflict.

What are the biggest challenges in building greater European sovereignty in defence? And how will this effort be funded?

As the situation at the Ukrainian border escalates, Mark Leonard and his guests talk about the recent developments and the state of play at the ground

The Russian troop build-up near Ukraine

How serious is the Russian troop build-up near the Ukraine border? And what should NATO do about it?

In the third episode of ECFR’s summer series on strategic sovereignty, Mark Leonard talks to Gustav Gressel, Acting Director of the Wider Europe programme and… 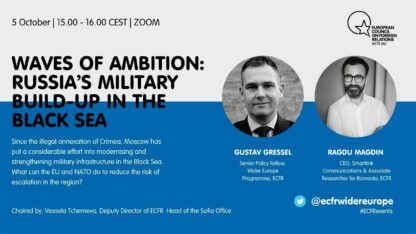 Waves of ambition: Russia’s military build-up in the Black Sea

What can the EU and NATO do to reduce the risk of escalation in the region? 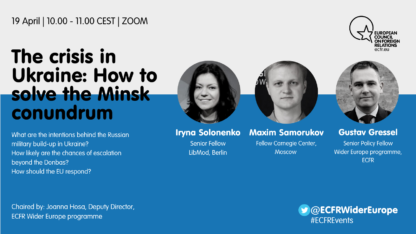 The crisis in Ukraine: How to solve the Minsk conundrum

What are the intentions behind the military build-up? How likely are the chances of escalation beyond the Donbas? How should the EU respond?

Submarines are currently not realistic

In larger numbers, I would rather expect the Abrams in the second half of the year. For political reasons, a small advance division however rather quickly

Germany is key to a coalition that delivers Leopard