Paris Call for Trust and Security in Cyberspace

Joint seminar organized in cooperation of the ECFR office in Berlin and Microsoft on the Paris Call for Trust and Security in Cyberspace, chaired by Jeremy Shapiro

In cooperation with European Foreign Ministries, the EEAS and Bruegel, "Strategic sovereignty: How Europe can regain the capacity to act" looks at the different ways that, in a world of superpower competition, Europe is in danger of becoming a plaything of other powers

What India thinks of Europe

Europe seen from the outside – the British view

The next phase of European integration must engage with - and provide safeguards against - the dark side of interdependence. Otherwise Brexit will be just the beginning.

With every terrorist attack, anti-migration parties will have a larger platform, but they will struggle to change policy 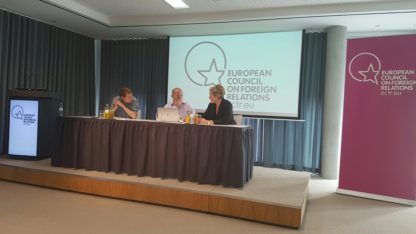 Europe seen from the outside: What does Israel think about Europe? And why?

Am 23. Juni setzten wir gemeinsam mit der Stiftung Mercator mit "What does Israel think about Europe? And why?" die Reihe „Europe seen from the outside“ fort.

Die-hard sovereigntists may wish to preserve the Englishman’s historic right to bathe in his own sewage, or be treated in A&E by an exhausted doctor - most of us will be glad that EU membership from time to time pushes our own authorities to do the right thing

Brexit’s international observers: The good, the bad and the ugly

Why are the Brexiteers so worried about the American President’s intervention in the referendum campaign?