Europe has until 11 December to decide how to respond to the expiry of special rules on Chinese exports. The rules were applied for a 15-year period after China joined the World Trade Organization in 2001. The debate has often focused on the issue of “market economy status” for China. But that’s a distraction from what is really at stake: Europe’s power to combat unfair Chinese trade practices against its single market.

The WTO allows its members to use comparisons to market economies to identify “dumping” of below-cost goods by China. But this rule expires in December, forcing Europe to choose between removing its tough measures, which would leave its producers unprotected from surges of low-price exports, or keeping the measures in place, exposing itself to legal challenges or a trade war from China.

Two new publications from the European Council of Foreign Relations look at the real issues behind the question of market economy status. 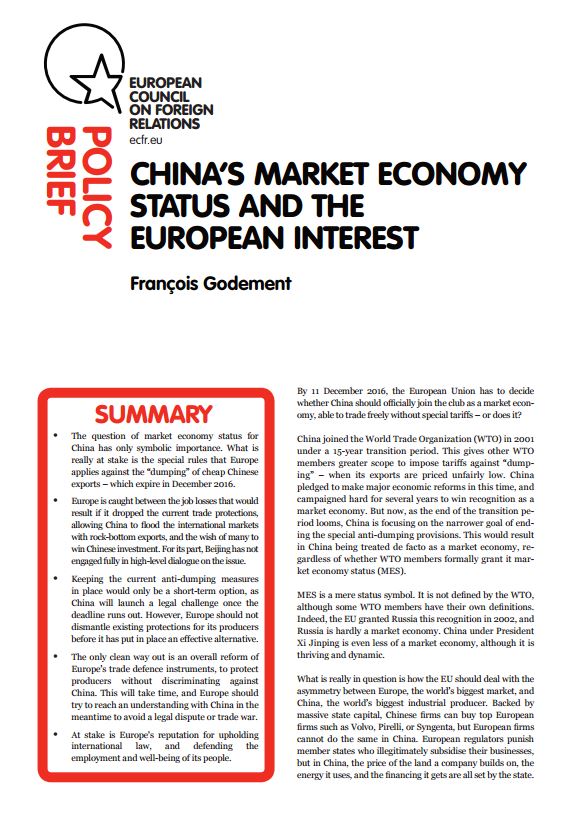 “China’s market economy status and the European interest”, a policy paper, argues that the question of market economy status is a red herring. The term is not even defined under WTO rules. In fact, China is focusing its attention on the battle to get rid of Europe’s special anti-dumping measures.

Keeping the current measures in place would only be a short-term solution, as China will launch a legal challenge once the deadline runs out. However, Europe should not dismantle existing protections for its producers before it has put in place an effective alternative.

The only clean way out is a broad reform of Europe’s trade defence instruments, to ensure protection for producers without discriminating against China. This will take time, and Europe should try to reach an understanding with China in order to avoid a legal dispute or trade war in the interval. 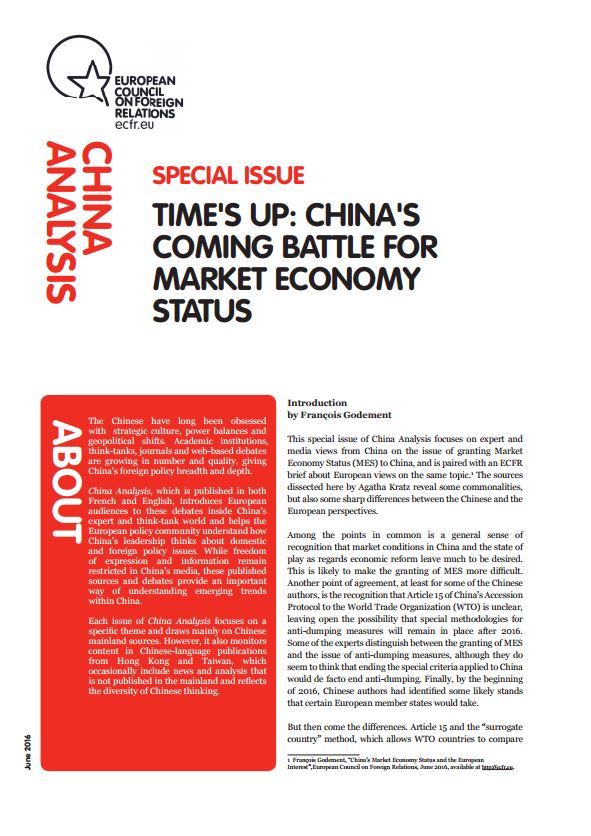 “Time's up: China’s coming battle for market economy status”, a special issue of ECFR’s China Analysis series, written by Agatha Kratz, draws on Chinese sources to assess how the issue looks from China, teasing out the common ground, and points of disagreement, between Europe and Beijing. It finds that there is a general sense in China that the country’s economic reforms need to go further, but also an emphasis on lobbying EU member states rather than negotiating. China may also be overconfident about its ability to persuade Europe to come round to its position on this issue.

“What is really in question is how the EU should deal with the asymmetry between Europe, the world’s biggest market, and China, the world’s biggest industrial producer. Backed by massive state capital, Chinese firms can buy top European companies such as Volvo, Pirelli, or Syngenta, but European firms cannot do the same in China. European regulators punish member states who illegitimately subsidise their businesses, but in China, the price of the land a company builds on, the energy it uses, and the financing it gets are all set by the state. The asymmetry threatens Europe’s very fabric. Beijing’s economic policies are deeply divisive. China provides inexpensive goods for consumers, but takes jobs away from producers.”

“It is hugely important for Europe to find a trade regime that is suitable for China. It is the Union’s second-biggest trade partner and is a key link in the global production chain, without which the shelves of our shops would be half empty. The EU’s defining talent is its ability to set a mix of rules that balance free trade and the welfare state. Sitting passively while this balance is under threat, because China has grown more than it has changed, is not an option. Inaction would only feed a massive popular backlash against global free trade.”

“China’s self-centred vision over market economy status is a cause for concern, even if it stems from the traditional views of China as a developing economy that has been ‘unfairly’ treated by Europe. Given the uncertainties on the horizon for the EU, China may be overestimating Europe’s internal divisions, and the effectiveness of its own lobbying, and underestimating Europe’s resilience when it comes to core economic and trade issues.”