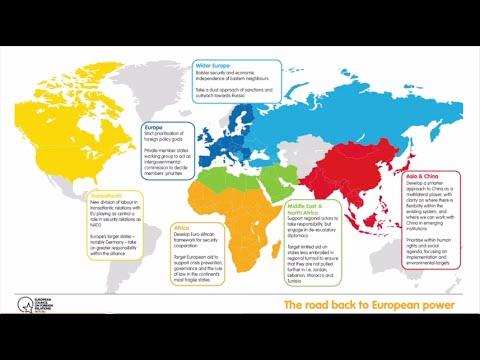 The EU needs an honest assessment of its capabilities and to set limited goals behind which member states can show sustainable unity.

“The road back to European power”, is published after the European Council’s green-light for stage two of Federica Mogherini’s global strategy review, a review that ECFR experts support and have long called for. They assert that the EU can still act effectively in protection of its interests and values — provided that it is severely realistic in its approach.

To this end, it recommends a strict prioritisation of the challenges Mogherini highlights in her report, with Russia and the Ukraine conflict and crises in the Middle East and North Africa as immediate priorities. To deal with the potential weaknesses of Europe’s internal dynamics of sometimes coinciding, sometimes clashing national interests, it recommends the creation of a group of member state representatives, who can act as an ‘intergovernmental convention’to map member state interests over the coming year.

The paper also recommends a number of key structural and political changes including:

On the eastern neighbourhood and Russia, the paper recommends:

On the Middle East and North Africa, the paper recommends:

On Africa, the paper recommends

Susi Dennison, co-author of “The road back to European power” and co-director of ECFR’s European Power programme, said:

“In 2003, Europe was a success story, epitomised by the famous claim 'Europe has never been so prosperous, so secure nor so free'. The rest of the world seemed anxious to emulate us and liberal democracy looked set to spread around the globe.

“In 2015, such optimism is a distant dream. Beset by economic and political travails, the EU and its member states have become anxious, and introverted. Crises burn on Europe’s borders and policy makers are increasingly aware how much global power has leached away from Europe.

“Europe’s global strategy must reflect this new reality. We cannot go on as we have done, aspiring to a leading role and falling short of this when confronted with our new place in the international system.

“Europe still has a strong range of tools at its disposal – diplomatic, developmental, security and economic – and the possibility of adding more military and cyber capabilities to its arsenal. But it will need all member states to come together, determine their shared priorities and assess the prospects for effective action in order for them to be properly deployed”