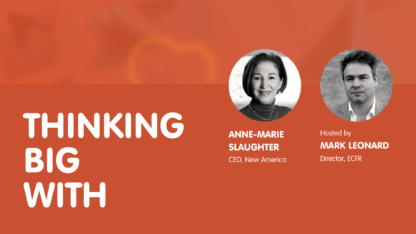 From climate, digital or security - what structures for global cooperation will emerge in a post-Merkel era and Biden presidency? 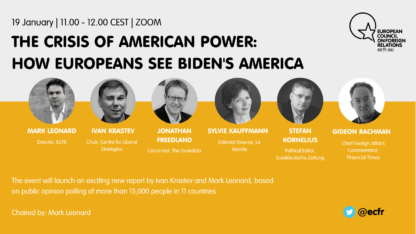 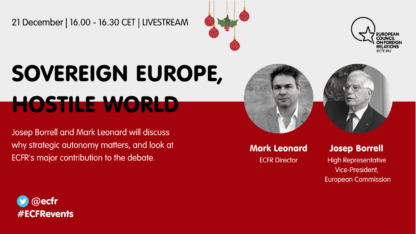 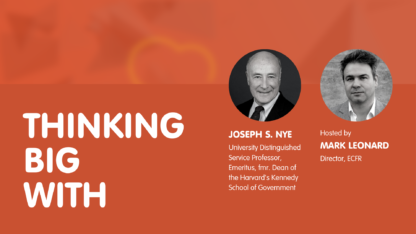 Europe’s pandemic politics: How the virus has changed the public’s worldview

From plaything to player: How Europe can stand up for itself in the next five years

Introduction The last five years have not been kind to the European Union’s foreign policy. The EU has been less relevant, less active, and less…

Strategic sovereignty: How Europe can regain the capacity to act

The EU needs to learn to think like a geopolitical power

Europeans can take steps now to enhance their economic power, without advocating increased protectionism or a retreat from globalisation

The crisis of American power

While America's crisis of democracy has been clear to see in recent months, equally consequential is its crisis of power on the world stage

Frugality exposes a Europe in need of optimism and reform

Building back a better transatlantic alliance

Even with a new, far more sympathetic US administration, it will be incumbent on Europe to come to the table as a co-equal power bearing solutions, rather than as a helpless child begging for protection and guidance

The covid-19 pandemic has exposed a gap between European aspirations and actions. If European leaders are serious about defending rules-based multilateralism and securing the European Union’s interests in the twenty-first century, they will need to start coming to terms with today’s geopolitical realities.

Although US President Donald Trump’s efforts to undermine the election are shameless, they are still more subtle than the outright election rigging that one finds in places like Belarus. Like other authoritarian leaders, Trump is deploying a new anti-democratic politics that has yet to be fully comprehended.

The other Putin on Europe’s doorstep

By weaponising immigration and launching new foreign adventures, Turkish President Recep Tayyip Erdogan is increasingly acting like his Russian counterpart. And though such behaviour speaks to a deteriorating political situation at home, Europeans can no longer assume that Turkey will remain firmly in the Western fold.

The covid-19 crisis has created an opening for stronger collective European action. But policymakers must understand that the demands of voters across the continent for greater cooperation do not reflect an appetite for institution-building, but rather a deeper anxiety about losing control in a perilous world.

Turkey’s role in the Eastern Mediterranean: Threats of Conflict and Prospects for Dialogue

Virtual talk on 17 September 2020 with Ibrahim Kalin on Turkey's position in the current Eastern Mediterranean conflict, the risks of military escalation and prospects for a dialogue with Europe

“War and Peace: Has Trump made the world more dangerous?”

Professor Joseph Nye talks to ECFR Director Mark Leonard about his new book "Is the American Century Over?"

A fair, green and digital recovery – brought to you by Portugal

How can the Portuguese presidency strengthen European strategic autonomy?

Super Mario to the rescue

What are the first challenges Draghi will face in his country and in Brussels?

The global impact of the European Green Deal

What are the geopolitical repercussions of the European Green Deal?

The future of EU-China-US relations

What are the prospects for transatlantic cooperation on China now that a new US administration is in power?

How do Europeans assess the future of transatlantic relations?

According to an ECFR poll, in the event of a ‘serious conflict between China and America’ in the coming years, ‘two-thirds of Germans would be in favor of our country taking a neutral stance’.

The German newspaper refers to ECFR’s survey on the transatlantic relationship.

Civic principles – from liberal democracy to international law – are the cornerstones of the EU, not a particular ethnicity, religion or culture.

It will be hard to convince allies that Washington is capable of coming back as a global leader.

The EU will have to become a “global standard-setter”, encouraging other countries to take more action on climate change in order for the deal to succeed.

Euronews picks up the joint paper by ECFR and Bruegel proposing seven actions that would provide foreign policy support for the European Green Deal.