The Age of Unpeace: Therapy for internationalists | Session 5 with Anu Bradford, Tom Wright and Feng Zhang

Join us on this journey to a more therapeutic approach to international relations. The mini-series brings you five special episodes with guests including today’s Anu Bradford, Thomas Wright, and Feng Zhang. 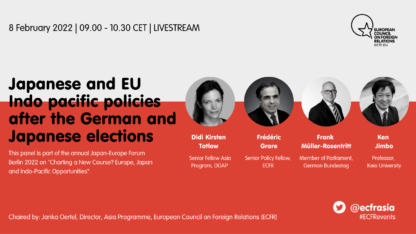 How will the new administrations in Germany and Japan impact the EU’s and Japanese Indo-Pacific strategy and China policy?

Coercion with Chinese characteristics: How Europe should respond to interference in its internal trade

China is pressuring EU companies to cease trading with Lithuanian firms. This is a critical moment for the European Union – it should build up defences for its internal market and protect member states and companies from political coercion.

Shared interests: Why both China and the West support the Iran nuclear deal

China’s economic support for Iran in recent years encouraged Tehran to come back to the negotiating table. Instability in the Middle East is as little in Beijing’s interests as it is in the West’s. 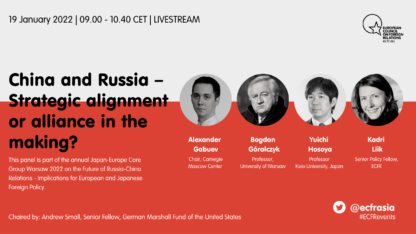 Corridor to nowhere: The Gwadar protests and the Pakistan-China relationship

The Gwadar protests are more than just a story of manipulation of the food insecurity and frustrations of the local population. They also illustrate the failure of an economic development strategy based on fallacies.

In the coming decades, the question of who sets the global rules, standards, and norms guiding technology, trade, and economic development will be paramount. Having lost their exclusive prerogative in this domain, some Western governments have begun to rethink the universality of the rules-based order.

The EU and the US lack a shared strategy for tackling economic coercion involving critical raw materials, and it could increase transatlantic competition during severe supply disruptions

Germany, Europe, and the coming battle over 6G

Germany is right to view 6G through the lens of growing geopolitical competition. But, instead of investing in its own 6G programme, the country could better serve its interests by supporting EU efforts to develop standards in this area.

China’s new military base in Africa: What it means for Europe and America