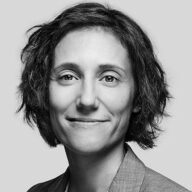 Jana Kobzova was an associate fellow at the European Council on Foreign Relations. Her research interests include the EU’s foreign policy towards the Eastern Partnership countries and Russia, as well as democratisation and transition in the post-Soviet space.

Kobzova is based in Brussels, where she works as a policy director at Rasmussen Global. Before joining RG, she worked as a senior programme officer for an international NGO, the European Endowment for Democracy, where she oversaw the organisation’s programming in the Eastern Partnership region. Before moving to Brussels in September 2013, Kobzova was a policy fellow and coordinator with the Wider Europe programme at ECFR’s London office, where she wrote policy reports on the EU’s relations with its eastern neighbours and Russia and worked on increasing ECFR’s profile in the area and expanding the Wider Europe programme’s activities. Between 2006 and 2009 she led the Belarus democratisation programme at the Pontis Foundation in Slovakia.

She has co-authored several books on Eastern Europe and the EU’s eastern neighbourhood policy and continues to write about the subject as an associate fellow at ECFR.

The EU’s relationship with Ukraine: fling or partnership?

Brussels and Kyiv have been at loggerheads for over a year and the recent EU-Ukraine summit has not broken the deadlock. Will the fling between the EU and Ukraine that is now a decade old end bitterly or will it finally mature into a real partnership?

The EU and Azerbaijan: Beyond Oil

How Europe can promote democracy in Azerbaijan

Vladimir Putin is set to reassume the reins of power in the Kremlin. But what will Russia's foreign policy be, and how should the European Union and its member states react?

As the EU and Russia hold their latest summit neither side can boast that they are in the best of health. But the summit is important for symbolic reasons – and there are several practical issues that they can address at the same time.

Russia in 2010 was as corrupt as Papua New Guinea, had the property rights of Kenya and was as competitive as Sri Lanka. As Putin readies himself to retake the presidency he must also work out how to deal with a country that is now firmly post-BRIC.

The EU-Russia summit: what really matters?

The atmosphere between the EU and Russia has improved remarkably over the last couple of years; but – ahead of this week's summit with Russia – the EU is struggling to turn good atmospherics into tangible progress in areas that really matter.

The EU and Belarus after the election

The EU and Azerbaijan: Beyond Oil

How Europe can promote democracy in Azerbaijan

The EU and Belarus after the election

European security: The spectre of a multipolar Europe

Western solidarity with Ukraine: Do it yourself

Slovakia has taken steps to diversify its economic interests away from Russia, which has altered its calculus on sanctions

Three pieces by ECFR's leading Wider Europe experts on the current situation in Ukraine, Putin's appeal for a new world order, and Germany's crucial role within the EU

Ukraine’s U-Turn: The real battle for Ukraine has just started

It is time for the EU to stop talking, start listening and act where Ukraine needs the assistance the most: with ensuring its economic stability, laying down new foundations for the rule of law and democracy and strengthening those who advance reforms

Time for a strategic pause in EU – Russia relations?

The article mentions two commentaries by ECFR experts Managing the Unmanageable: Germany and a Resurgent Russia and Western solidarity with Ukraine: Do it yourself

TVP INFO in a TV programme “Studio Wschod” broadcasts Nicu Popescu's commentaries and other conclusions of  the ECFR conference in the context of the crisis in Ukraine.