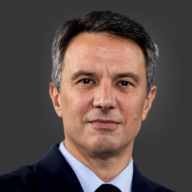 Camille Grand is a Distinguished Policy Fellow at the European Council on Foreign Relations. He leads the organisation’s work on defence and disruptive technologies in European security.

Previously, he worked as Assistant Secretary General for Defence Investment at NATO (2016-22), piloting NATO’s work in capability delivery, missile defence, and armament and technology cooperation. He previously was the director of the Fondation pour la recherche stratégique (FRS, 2008-16), the leading French think tank on defence and security studies.
He also held senior positions in the French Ministry of Foreign Affairs as head for disarmament and multilateral affairs (2006-08), and the Ministry of Defence (MoD) as deputy diplomatic adviser to the Minister (2002-06). He has also been a senior adviser on nuclear policy at the French MoD Policy branch and worked as a researcher inter alia at the EU Institute of Security Studies (EU-ISS) and the Institut français des relations internationales (IFRI).

He has been an associate professor at the Paris School of International Affairs (Sciences Po Paris), the Ecole nationale d’administration (ENA) and the French army academy. He has also served on several independent expert groups and boards for the United Nations, the European Union, NATO and the French government. His expertise includes defence and security policy, NATO and EU common defence and security policy, armament and technology, nuclear and missile defence policy, disarmament and non-proliferation.