As the Turkish president continues his delicate balancing act between the US and Russia, the crisis in Ukraine presents new opportunities for Ankara's transatlantic credentials

How the Turkey-UAE Rivalry is remaking the Middle East

How can the EU prevent the Turkey-UAE rivalry from destabilising European security and foreign policy?

Useful enemies: How the Turkey-UAE rivalry is remaking the Middle East

Instead of using the UAE to push back against Turkey or vice versa, Europe should develop its own strategy on their rivalry

Low expectations: A year of renewal for the EU-Turkey relationship

Grand bargains are tough to achieve but, eventually, Turkey and the EU will have to strike up a working partnership whereby they cooperate on some issues and compete on others 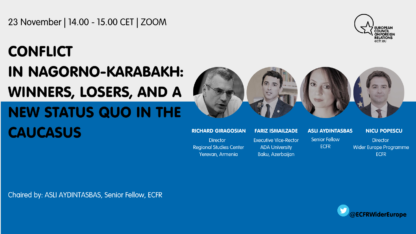 Conflict in Nagorno-Karabakh: winners, losers, and a new status quo in the Caucasus

Best to sit and talk: How to solve the conflict in the eastern Mediterranean

A conflict could be brewing in the eastern Mediterranean. Here’s how to stop it.