Bosnia to war, to Dayton, and to its slow peace

Low expectations: A year of renewal for the EU-Turkey relationship

Grand bargains are tough to achieve but, eventually, Turkey and the EU will have to strike up a working partnership whereby they cooperate on some issues and compete on others

The impossible stalemate: How the Belarus face-off could go on and on

Aliaksandr Lukashenka rewrote the rules to keep himself in power. But it did not succeed in 2020 – and the EU will not be able to remain a spectator to Belarus’s problems forever 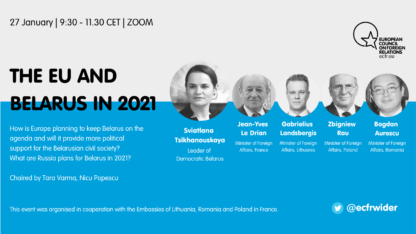 What to expect from the Kosovo-Serbia dialogue in 2021

Kosovo and Serbia will likely make little progress this year in their long-running dialogue, due to a lack of honest leadership and genuine attempts to prepare the public for a compromise