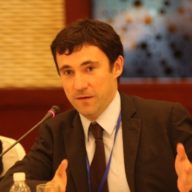 Dr. Mathieu Duchâtel is Senior Policy Fellow and Deputy Director of the Asia and China Programme at the European Council of Foreign Relations. Based in the Paris office of the ECFR, he works on Asian security, with a focus on maritime affairs, the Korean peninsula, China’s foreign policy and EU-China relations.

Before joining ECFR in November 2015, he was Senior Researcher and the Representative in Beijing of the Stockholm International Peace Research Institute (2011-2015), Research Fellow with Asia Centre in Paris (2007-2011) and Associate Researcher based in Taipei with Asia Centre (2004-2007). He holds a Ph.D in political science from the Institute of Political Studies (Sciences Po, Paris). He has spent a total of nine years in Shanghai (Fudan University), Taipei (National Chengchi University) and Beijing and has been visiting scholar at the School of International Studies of Peking University in 2011/2012 and the Japan Institute of International Affairs in 2015. His latest co-authored book, China’s Strong Arm, Protecting Citizens and Assets Abroad was published in the Adelphi collection by IISS and Routledge in 2015.

Japan-China relations: confrontation with a smile

China’s Maritime Silk Road project is affecting Europe in vital areas of interest like maritime trade, shipbuilding, and the global reach of the Chinese navy

China’s Maritime Silk Road project is affecting Europe in vital areas of interest like maritime trade, shipbuilding, and the global reach of the Chinese navy

In the continued absence of a policy, European commercial actions in the armament sector could have a destabilising impact on Asian security

Taiwan between Xi and Trump

China and Russia: Gaming the West

China is taking on a new military role in Africa, seeking to boost its image as a great power that promotes peace and security worldwide

Xi’s army: Reform and loyalty in the PLA

Japan-China relations: confrontation with a smile

For Pyongyang, a “double suspension” agreement could be a turning point towards the goal of being recognized as a nuclear state

Tokyo has a good chance of persuading Trump that security co-operation with Japan is in his interests, but the end of TPP is a serious blow.

China and the South China Sea arbitration: what next?

European policymakers worry about Russian and Chinese integration efforts, which push them to think more strategically about the Eurasian landmass

ECFR Clips: Japan and the maritime security in East Asia

The China-Russia game against the West

Mathieu Duchâtel is quoted by La Croix regarding the arrest of ex-Interpol president Meng Hongwei.

Mathieu Duchâtel is quoted by Le Monde regarding US-China trade and defense relations.

Mathieu Duchâtel is quoted by La Croix regarding defense trade between Russia and China.

Mathieu Duchatel argues that as China becomes a bigger world player, it must protect its global interests and investments