Could China escalate and take military action in the South China Sea? Last week the Permanent Court of Arbitration in The Hague issued a highly unfavorable verdict for China. The case raised by the Philippines questioned some of China’s key claims and policies in the South China Sea. China did not take part in the proceedings and had warned for months that it would reject the verdict, but the award still constitutes an embarrassment.

Many observers have noted that the ruling represents the worst possible outcome for Beijing. China’s claims of “historic rights” within the so called “nine-dash line” have been ruled incompatible with the international law of the sea. In addition, any Chinese claims for an Exclusive Economic Zone (EEZ) in or around the Spratly Islands would contradict the verdict, which concludes that no features in the Spratly Islands actually qualify as “islands” under United Nations Convention on the Law of the Sea (UNCLOS) – even the Taiwanese held Itu Aba/Taiping fell short of island classification, instead being deemed a “rock” – in a move which further infuriated the Chinese. Under UNCLOS, these rocks generate only 12 nautical miles of territorial sea – or are deemed low-tide elevations (LTEs) that do not generate any maritime entitlements at all. According to the court’s verdict, the Spratly “rocks” are either located in international waters, or in the EEZ of the Philippines, Brunei and Malaysia.

Taylor Fravel’s study of cooperation and conflict in China’s territorial disputes describes how in the past Beijing has chosen to escalate in situations where it experienced a noticeable decline in its bargaining position. In 1974 China used force against South Vietnam in the South China Sea in order to recapture the Paracel Islands and against a unified Vietnam in 1988 to seize Johnson Reef and five more features, massacring a party of Vietnamese flag-bearers. In 1994, China seized Mischief Reef unobserved and it took months before the world noticed. Until then, China was the only claimant to have no permanent presence in the area.

The ultimate test of China’s commitment to the DOC is respect for the status quo in terms of occupation of features in the South China Sea.

The arbitration verdict has all the characteristics of an event that strongly undermines China’s bargaining position – challenging the legality of key aspects of China’s South China Sea policy and equipping rival claimants, the United States, and Japan, with legal language to criticise Chinese actions from a moral high ground. But is it fair to compare the circumstances of those actions with the current situation? In 1974 and in 1988, there was no real prospect for a negotiation. South Vietnam was on the verge of collapse and the united Vietnam was a proxy of the antagonistic Soviet Union. Today, China is bound by the 2002 declaration on a code of conduct (DOC), which bars the use of military force among the parties in the dispute. Observers generally fail to acknowledge that by endorsing the DOC, Beijing has de facto accepted the loss of most of the territory comprised within those “dash lines” and that it only controls six features in the Spratly – many fewer than its rivals. Many accuse China of violating the DOC by resorting to intimidation and land reclamation and argue that the DOC is dead. There is also widespread pessimism regarding the possibility of concluding a legally binding DOC that would freeze the existing status quo and satisfy Deng Xiaoping’s notion of leaving the resolution of the sovereignty issue “to the wisdom of the future generations”.

The ultimate test of China’s commitment to the DOC is respect for the status quo in terms of occupation of features in the South China Sea. Exiting the DOC and launching a military operation to seize more features would terminate Chinese commitment to a peaceful solution. While the campaign to delegitimise the award is in full swing at home and abroad, Chinese actions have so far been restrained. Was the “Leading Small Group on defending China’s maritime interests” caught off guard as the ruling went beyond the wildest expectations of China’s rivals? In a way, sticking to the line of “no acceptance, no participation, no recognition, no implementation” of the arbitration could simply mean that China ignores it and continues as if nothing happened.

But President Xi Jinping has stated that China’s “national sovereignty” and “maritime rights and interests in the South China Sea will not be affected in any way by the ruling”. It would be consistent with past practice if Beijing moved to reestablish a more favourable balance of power in the South China Sea, and demonstrate the Communist Party’s determination to uphold the Chinese nation’s interests.

And there are already clear signs that China is using its military power to rebuke the arbitration. Admiral Wu Shengli, the Commander of the Chinese navy, just hosted the US Chief of Naval Operations, Admiral John Richardson, at the Chinese Navy Headquarters on July 18, following the successful participation of Chinese warships in the major US RIMPAC exercise in the Pacific. He made clear that the militarisation of China’s artificial islands will continue so that their defence corresponds to the “level of threats”. After a PLA Air Force patrol close to Scarborough Shoal made the headlines of most Chinese newspapers yesterday, a military spokesman announced that air patrols would become a regular occurrence now. China is working at establishing elements of an Air Defence Identification Zone in the South China Sea in everything but name.

China is working at establishing elements of an Air Defence Identification Zone in the South China Sea in everything but name.

At the same time, prominent military officers talk of appeasement. Zhu Qihao, the director of National Security and Military Strategic Research at the PLA National Defense and Technologies University explains that China stated it would not resort to military force to solve the South China dispute, nor would it quit the UNCLOS as a consequence of the arbitration. He argues that “military means must remain symbols of military deterrence” and advises China to get rid of its “dualistic mindset” of “friends or enemies” and to stop blaming the US for all its difficulties.

What diplomatic course can be expected from Beijing? China is already seeking a bilateral agreement with the Philippines. Recent interviews in Beijing suggest that China might revive the joint development approach bilaterally. It is also clear that China still sees advantages in keeping the discussion alive on a legally binding code of conduct for the South China Sea. But for a negotiation to succeed, it will have to put aside the arbitration.

What are the consequences for Europe? The little influence the European Union exerted over these developments has further diminished after the EU took three days to issue a very general statement on the arbitration outcome – after Greece and Hungary blocked a more ambitious text submitted to the European Council by the European External Action Service. This is a diplomatic victory for China, even though the stakes of arbitration were understood in Brussels from the outset, much less in terms of geopolitics than in terms of upholding the principles that underpin the international order. At the forefront, France recently expressed its ambition to play a role by leveraging its naval presence in the Asia-Pacific, together with European partners, as confirmed by Defense Minister Jean-Yves Le Drian in Singapore. This would not be US-style Freedom of Navigation Operation, but rather political signaling of European support for a maritime order based on the rule of law. This, as of today, still remains theoretical. Looking ahead, it might be that Europe will only influence Asian maritime security as an arms provider. 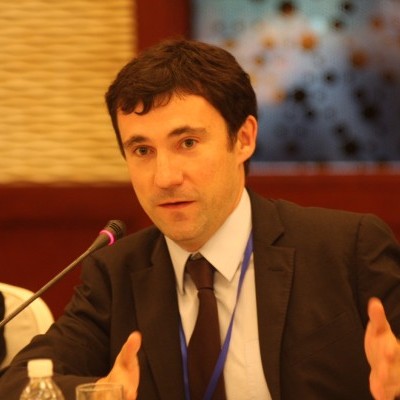