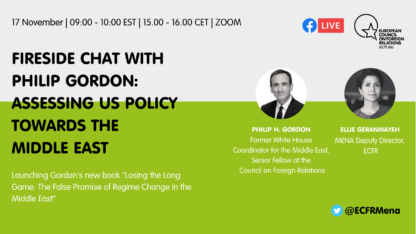 Zoom registration required, see link below. After President-elect Joe Biden’s victory at the US elections, the ECFR MENA team will host a fireside chat…

How economic troubles are driving Tunisians and Lebanese to Europe

Trump or Biden: Three ways to make Europe matter in the Middle East

The US will continue to retreat from the Middle East and North Africa, whoever wins the presidency. Europe needs to get its house in order to defend its interests.