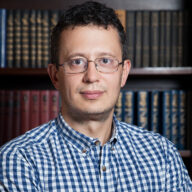 Vadim Pistrinciuc was a visiting fellow with the Wider Europe programme at the European Council of Foreign Relations. His topics of focus include the Eastern Partnership, Russia, public policies and reforms in EaP countries, social development, human rights and informational security.

Pistrinciuc was a Konrad Adenauer Stiftung visiting fellow based in ECFR's Berlin office. He was a member of Parliament of Moldova from 2014 to 2019.  He served as the Deputy Minister of Labor and Social Protection from 2009 until 2011 and was senior political adviser to the Prime Minister from 2011 until 2013. He advised the Prime Minister on public administration reforms, political programs, political strategies. Prior to that, Pistrinciuc served an expert, project manager and consultant on projects within international organizations (UNDP, UNICEF, OIM) in the areas of human rights, public administration reforms, anti-corruption and social development. He holds a PhD in Sociology from Moldova State University.

A problem shared: Russia and the transformation of Europe’s eastern neighbourhood

Moldova crisis: The first battle in the war for democracy

Swift action from Brussels transformed the Moldova crisis on the ground. The EU will now learn to keep oligarchic governments at arm’s length in future.