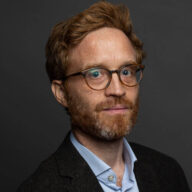 Julien Barnes-Dacey is the director of the Middle East & North Africa programme at the European Council on Foreign Relations. He works on European policy towards the wider region, with a particular focus on Syria and regional geopolitics.

Barnes-Dacey’s recent publications include “Principled pragmatism: Europe’s place in a multipolar Middle East,” “Society max: How Europe can help Syrians survive Assad and coronavirus,” and “Guns and governance: How Europe should talk with non-state armed groups in the Middle East.” His work has been published in the likes of Foreign Policy, Politico, the Financial Times, and the New York Times.

Immediately prior to joining ECFR Barnes-Dacey headed the MENA practice at Control Risks, a private sector consultancy. Before this he worked as a journalist across the Middle East. Based in Syria from 2007 to 2010, he reported for publications including the Financial Times, the Wall Street Journal and the Christian Science Monitor. He worked across Iraq as editor of Niqash and was also based in Egypt. Barnes-Dacey was an assistant foreign editor for UK television’s Channel 4 News, and a field producer for Al Jazeera International.

Barnes-Dacey holds a BA in history from the London School of Economics, an MA in Middle Eastern Studies from the School of Oriental and African Studies, and studied Arabic at the Institut Français du Proche-Orient.

Is Iraq heading towards civil war and dictatorship?

Assad’s continued defiance in the face of growing isolation

Are the days of the Syrian president numbered? Despite popular opposition and growing international isolation, Assad's eventual demise is by no means assured.

It may be counter-intuitive, but the path towards meeting these U.S. and Western interests rests on getting a deal between the different actors before new escalation erupts.

I don’t think we will see many Syrian or Libyan mercenaries in Donbas. It is also doubtful that they would be useful to the Russians.