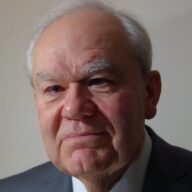 Chinese and East Asian strategic and international affairs, issues of integration and conflicts

François Godement is the director of ECFR’s Asia & China programme and a senior policy fellow at ECFR. He is a non-resident senior associate of the Carnegie Endowment for International Peace in Washington, D.C., and an outside consultant for the Policy Planning Staff of the French Ministry of Foreign Affairs.

A long-time professor at France’s National Institute of Oriental Languages and Civilisations and Sciences Po, he created Asia Centre IFRI at the Paris-based Institut Français des Relations Internationales (1985-2005). In 2005 he founded Asia Centre as an independent centre for research on Asian issues as they intersect global debates. He is a graduate of the Ecole Normale Supérieure de la rue d’Ulm (Paris), where he majored in history, and he was a postgraduate student at Harvard University. In 1995 he co-founded the European committee of the Council for Security Cooperation in the Asia-Pacific (CSCAP), which he co-chaired until 2008. He has also been a member of the advisory board for the Europe China Academic Network (ECAN).

He is also a frequent contributor to media and academic debates on Asia and China.

Hamburg G 20: A test for the China-EU-US triangle

China and the Mediterranean: Open for business?

Introduction Partnering with China on its ‘One Belt, One Road’ initiative, also known as the ‘Belt and Road Initiative’ (BRI), is often like looking at…

Conference: Should foreign investment be screened?

As the EU-China Summit opens in Brussels today, is there now a common ground on which the two can come together?

Trump’s hard-nosed approach to North Korea is likely to have played a role in the election of a South Korean president who takes a softer view of Pyongyang, and who opposes US intervention

Macron and the French Paradox

The EU in Trump’s World #4: the reset of the U.S. Asia Policy

Four views from our authors on Chinese and Taiwanese views of the roots of Trump’s strategy and trade policy, and Chinese blind spots

The United Nations of China: A vision of the world order

China at the gates: A new power audit of EU-China relations

Europeans should adopt more realist positions vis-à-vis China, to defend their own interests and urgently restore balance in the relationship

China and the Mediterranean: Open for business?

Introduction Partnering with China on its ‘One Belt, One Road’ initiative, also known as the ‘Belt and Road Initiative’ (BRI), is often like looking at…

Policy recommendations Stay true to the EU’s values In the current political climate of eroding values and principles, there are two temptations that EU member…

China and Russia: Gaming the West

Investment screening: A victory for Europe

This week, the EU reached a political agreement on a framework for screening foreign direct investment at unprecedented speed, and took a step forward in building trust

Italy's new coalition government is moving the country on the path to bankruptcy, causing Italy to look overseas at China for support in pressuring the EU to bail them out

China and the last of the multilateralists

As the trade war between China and the United States heats up, Europeans should think hard about who they turn to for assistance

Big in Asia: Behind the rhetoric of EU relations with China and Japan

The last ten days have been big for the EU and its partners in Asia, namely China and Japan. With EU-China and EU-Japan summits resulting in historic agreements, the EU is slowly strengthening its relationships with allies to the east.

The agreement is a dead end sold as the road to denuclearisation and peace – and, as such, it beggars belief

Europe’s most useful role is to push for steady American policies. It is also to convince Iran that a compromise on missiles is in its own interest.

The four power audits show that Europeans, particularly when working together, retain the capacity to cooperate and compete effectively with all these powers.  But they also show that, in each case, Europe is failing to do so.

The Inter-Korean Summit: Peace is not – yet – at hand

North Korea is not yet denuclearized. To get there, China will have to play significant role in the negotiations.

Why China (probably) won’t go to trade war with America

The US protecting its own technology is not the same as a trade war. But were such a war to emerge, it may well be the apparently invulnerable Xi Jinping rather than the bullishly confident Donald Trump who finds his country worse off as a result

What does India think?

Indians are many, as are their demands, aspirations, and ideas

Mark Leonard speaks with Francois Godement and Jeremy Shapiro about what kind of leverage Europe can have over America and other great powers. And should…

A follow-up discussion to “China at the gates: A new power audit of EU – China relations” by François Godement & Abigaël Vasselier. Speaker is…

Europe and the great powers

Mark Leonard speaks with Asli Aydıntaşbaş, Kadri Liik, François Godement and Jeremy Shapiro about Europe’s relations with the US, China, Russia and Turkey. The podcast…

The future of Europe-China relations.

Is there a ‘collateral dividend’ to Trumpian foreign policy?

What did we learn from China’s Party Congress?

Conference: Should foreign investment be screened? 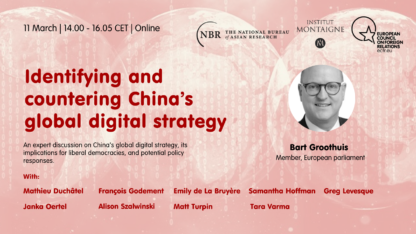 François Godement is interviewed by Le Figaro regarding China-US relations