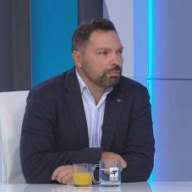 Daniel Stefanov was the programme coordinator for the Sofia office of the European Council on Foreign Relations.

Stefanov joined ECFR as Sofia office coordinator in September 2017. Previously, he has worked as a spokesperson for the UNHCR in Bulgaria. In addition, he was the Information Director of the Bulgarian Ministry of Defence. Between 2009 and 2014, he was cabinet member at the Ministry of Foreign Affairs and Ministry of Defence. He has supported and observed elections in Bulgaria and countries such as Macedonia, Russia, Pakistan and Malawi.

Stefanov holds an MA degree from Central European University in Budapest. He teaches courses on democracy, elections, and media at the New Bulgarian University in Sofia.

Living on the edge: Could Bulgaria ally with the Visegrád group?

By actively supporting Macedonia and Greece to settle their name conflict, the EU could energise other countries of the Western Balkans to engage in democratic reforms, while also strengthening their economic outlook – and counter an assertive Russia

Views from the capitals: How to constrain populism in Germany

What can Germany learn about dealing with populist parties from other European countries’ experience?

Daniel Stefanov spoke to Bloomberg TV about the protests in Catalonia.