This time last year, few leaders in Brussels doubted that Bulgarian Prime Minister Boyko Borissov, his party GERB, and the government he heads were pro-European. Although the European Union’s Cooperation and Verification Mechanism closely monitors Bulgaria and the country’s entry into the Schengen Area has been postponed, EU politicians had confidence in the government in Sofia. They were pleased with Bulgaria’s fiscal discipline, control of its border with Turkey, and support for Brussels’ proposed migration policies. And, during its presidency of the Council of the EU, Bulgaria received their praise for placing integration with the western Balkans on Europe’s agenda.

However, in September this year, most GERB representatives in the European Parliament opposed efforts to the trigger EU sanctions procedures against Hungary – despite their party’s close affiliation with Germany’s Christian Democrats, who support the measure. This was no accident, as subsequent comments from GERB’s leaders made clear. The party has continued to back Hungarian Prime Minister Viktor Orbán using a political narrative that refers to unequal treatment of relatively small member states by larger, more established ones. Indeed, the Bulgarian government’s public statements increasingly echo those of its counterparts in the Visegrád group (comprising Hungary, the Czech Republic, Poland, and Slovakia).

Borissov’s response to the murder of Bulgarian journalist Viktoria Marinova last month – which some officials in Brussels loudly interpreted as an attack on free speech, but which appears to have been an apolitical crime – caused further damage to his relationship with the EU leadership. Overall, the public discourse of individual representatives of GERB and the governing coalition has, in practice, shifted away from liberalism and towards conservative positions.

ECFR’s new EU Coalition Explorer provides insights into whether the shift goes beyond rhetoric – whether Bulgaria is drawing closer to the Visegrád group in other ways and, if so, the political logic of this. The data clearly show that Bulgaria, like other relatively small member states, does not participate in political coalitions in Europe and does not receive much attention from politicians and policy experts in the most influential EU countries. At the same time, Bulgaria believes that it should seek to cooperate with Germany and France on the most important issues Europe faces. (Countries such as Romania, Croatia, Slovenia, and Malta have adopted similar positions.) 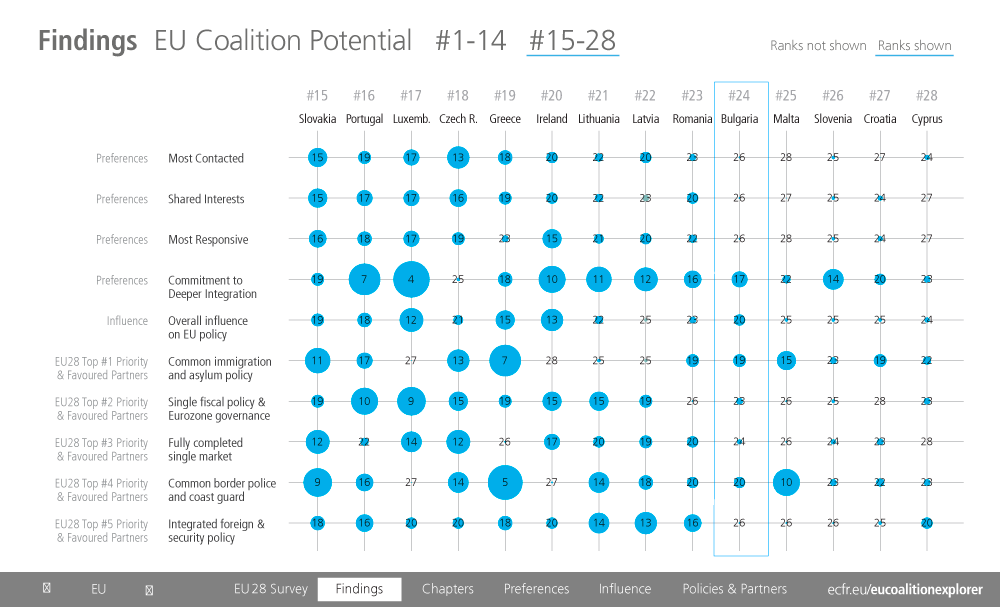 Interestingly, Bulgarian and Romanian respondents to ECFR’s new survey rank their country’s commitment to deeper European integration as highly as that of France. However, other member states see Bulgaria and Romania as having a weak commitment to integration. These differences between Bulgarian and Romanian respondents’ perceptions and the perceptions of respondents in other EU countries symbolise the marginalisation of states such as Bulgaria and Romania. This process has created a de facto European periphery. The main features of member states on the periphery are their lack of political influence in the EU and their exclusion from integration initiatives due to technical or, most often, political criteria that they do not meet.

The resulting sense of exclusion can be seen in respondents’ disappointment with EU countries. Bulgarian and Romanian respondents are most disappointed with the Netherlands, due to the country’s long-standing refusal to admit Romania and Bulgaria to the Schengen Area.

Therefore, frustration with Bulgaria’s peripheral position in the EU may have prompted GERB to rethink its attitude towards Europe and to move into Orbán’s camp – at least rhetorically. But would this benefit Bulgaria? The EU Coalition Explorer suggests that the answer to this question is complex.

Bulgarian and Hungarian respondents share some policy priorities for the next five years, including asylum and migration, as well as border control. Yet they differ on fiscal policy, the energy market, the eurozone, and the Common Security and Defence Policy – issues that only Bulgarian respondents prioritise and on which Bulgaria generally favours shared European decision-making. 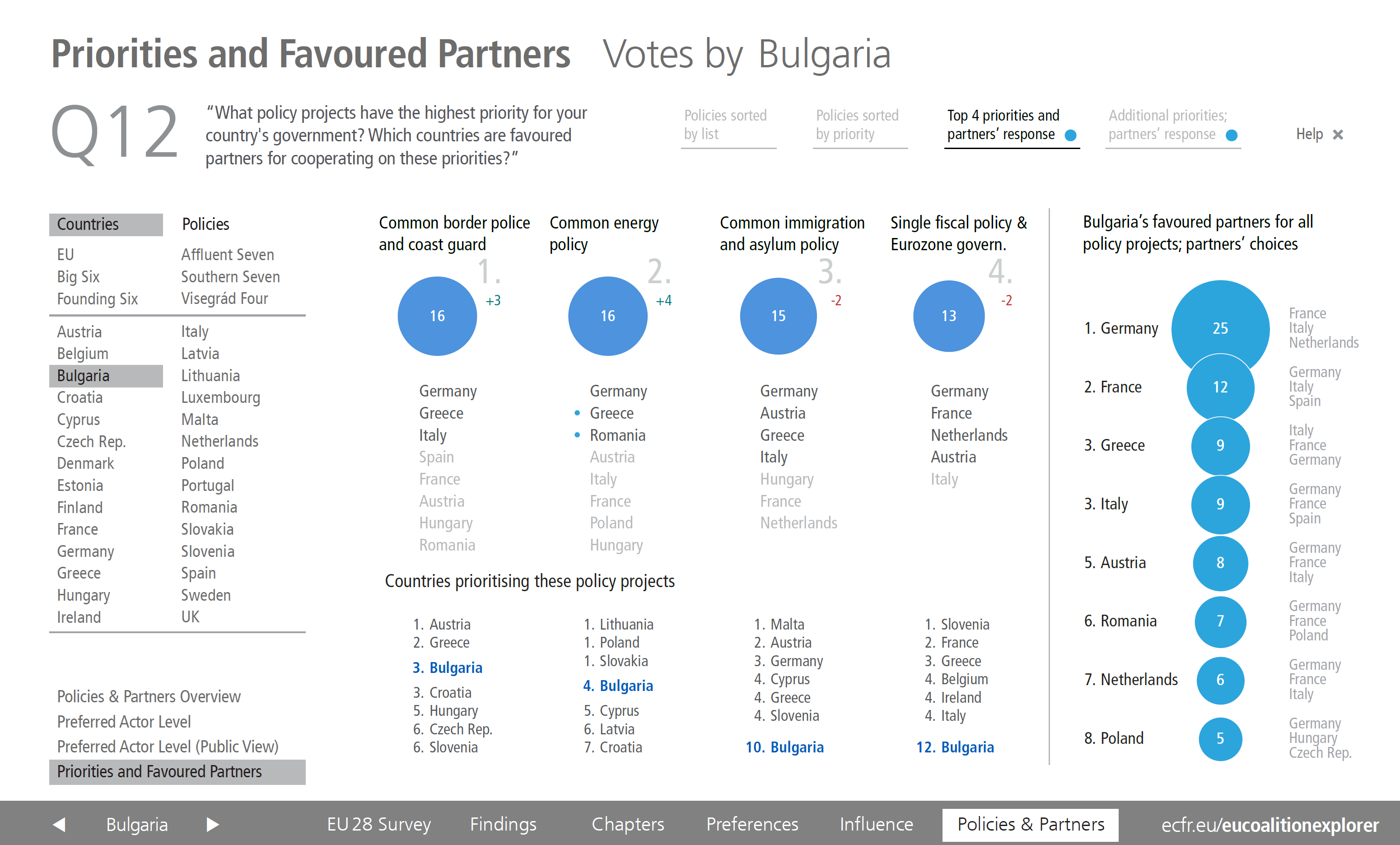 However, shared priorities do not necessarily translate into common interests. Bulgaria and Hungary have differing ideas about how best to address the issues they prioritise. According to the survey, 70 percent of Bulgarian politicians and policy experts would prefer all EU member states to make decisions in these areas, while only 7 percent would like national governments to do so. In contrast, 42 percent of Visegrád respondents believe that all EU member states should make such decisions. As expected, most Hungarian respondents want national governments to make these decisions. The most striking difference between Bulgaria’s views and those of Hungary and Poland is on migration policy: 82 percent of Bulgarian respondents believe that all EU member states should make decisions in this area, while no Hungarian or Polish respondent shares this belief.

The EU Coalition Explorer also reflects member states’ positions on common justice and home affairs policy. This area covers issues such as organised crime, drug trafficking, and cyber threats, as well as more controversial topics such as corruption and discrimination. Among respondents to the survey, Bulgarians have some of highest levels of confidence in a common European approach to these issues. In comparison, just 6 percent of Hungarian respondents take this position (fewer than any other national grouping). Moreover, Bulgarian respondents are clearly afraid that, as with the Schengen Area, other EU policies will increasingly become subject to European agreements from which their country will be excluded.

In preparation for the May 2019 European Parliament elections, some political parties will almost certainly harden their tone on Brussels and borrow other tactics from Orbán, as this appears to be an easy way to win votes and draw the attention of many EU member states. Nonetheless, as ECFR’s new survey shows, Bulgarian and Romanian political elites have a keen interest in European integration that includes their countries. The European periphery – which may include countries such as Bulgaria, Romania, and Croatia – could pose a serious threat to such initiatives. Despite their obvious interest in the area, elites in these countries may turn against deeper integration if it proves difficult and takes a long time to achieve.