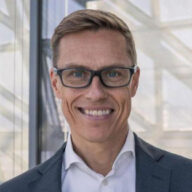 Alexander Stubb is the director of the School of Transnational Governance at the European University Institute in Florence. Previously, he served as prime minister, finance minister, foreign minister, and trade and Europe minister of Finland. He was a member of the European Parliament and of Finland’s national parliament, as well as chair of the Finnish National Coalition Party. He is a former vice-president of the European Investment Bank and has been a visiting professor at the College of Europe in Bruges. He has written numerous books and academic articles on European affairs.

The EU should ensure that all willing and able European democracies have a clear and realistic path to membership or an alternative form of cooperation. Europe’s future depends on it.

What can Sweden and Finland offer NATO? And are they worried about the Kremlin’s threats to attack their countries?

Biden has said all the right things, but when differences of opinion emerge the tone will change. And, of course, I think China will be one of the key areas.