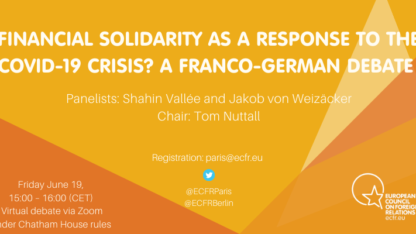 Financial solidarity as a response to the Covid-19 crisis? A Franco-German debate

Dear Madam, Sir, dear friends, The Berlin and Paris offices of ECFR are delighted to invite you to a virtual debate: “Financial solidarity as…

European Solidarity Tracker: The solidarity that always was there

ECFR’s new tracker reveals the breadth and depth of solidarity expressed throughout Europe during the coronavirus crisis – with findings that will surprise critics.

Berlin has quietly made concessions to new calls for greater solidarity. But back home this consensus may not last forever.

How grassroots democracy can cure the ills of central Europe

A new “Pact of Free Cities” is launching to combat populism, promote transparency, and tackle the climate crisis

Germany at the helm: Can it bring Europe together in 2020?

Denmark’s shift towards an ever greener union

With a domestic debate on the EU looming, the Danish government appears likely to strike a new agreement on its Europe policy