This week, Hassan Rouhani made his first trip to Iraq in his capacity as Iran’s president. During the three-day visit, Iran and Iraq signed several preliminary trade deals, including those on energy, railway projects, health, and investor visas intended to boost their trade from $12bn to $20bn. The two nations, which share a porous 1,500km border, have come a long way since their eight-year war in the 1980s. In the past decade, Iran and Iraq have developed their political, economic, social, and security ties. Rouhani’s visit to Iraq aims to further strengthen these relations.

Since the Islamic State group (ISIS) took over large swathes of Iraq in 2014, Tehran and Baghdad have been locked in a necessary fight against this common enemy. Now, following the military phase of the campaign against ISIS in Iraq, and the recent Iraqi election, the sides are opening the next chapter in their relationship. However, this will not be an easy task, given that Iraq is caught in rising tension between Tehran and Washington.

Below, two ECFR policy fellows consider the significance of Rouhani’s visit to Iraq.

The visit is part of a political, security, and economic strategy Tehran is pursuing after the United States withdrew from the Iran nuclear deal and subsequently reimposed sanctions on the Iranian economy. Iran is eager to counter the US strategy of placing it under “maximum pressure”, particularly in terms of ensuring that countries on its border remain friendly. Tehran is fully alert to growing US pressure on the new Iraqi government to roll back Iranian influence in Iraq. After expending resources to fight ISIS in Iraq, Tehran is keen to secure the gains it has made and to ensure no political faction in Iraq turns against it.

Through this visit, Tehran has sent a clear political message to the US that, while American forces have the upper hand in Iraq’s airspace, Iran is the major external player on the ground. The trip follows US President Donald Trump’s unannounced visit to an airbase in Iraq last December, which raised many eyebrows for breaking protocol (as did Trump’s subsequent remark that US troops ought to remain in Iraq to “watch Iran”). Unlike Trump, Rouhani was openly and formally hosted by the Iraqi government, meeting with an array of Iraqi factions and competing political leaders.

One of Rouhani’s most significant meetings was with Iraq’s highest religious authority, Grand Ayatollah Ali al-Sistani (who once rejected a meeting with former Iranian president Mahmoud Ahmadinejad), in Najaf. This meeting sent an important signal to Rouhani’s domestic opponents, who have often been at odds with his government over its relatively moderate foreign policy proposals. Iranian conservative media outlets were quick to point out that Rouhani’s trip to Iraq was possible due to the sacrifices of Iran’s Islamic Revolutionary Guards Corps (IRGC). This meeting also sent a message to the US, whose presidents have never been received by Sistani, that Iraq cannot be coerced to turn against Iran.

On a practical level, Rouhani’s visit led to an array of agreements that are set to ease trade and travel between Iran and Iraq (although most are memorandums of understanding rather than binding contracts). This comes at a time when Iran is keen to offset the economic damage of US sanctions through expanded trade with its immediate neighbourhood. Indeed, since Washington reimposed sanctions on Iran, Iraq has become one of the country’s top trade partners and the Iranian government has significant amounts of money held with Iraqi banks.

Given the hit to Iran’s global banking interests resulting from US secondary sanctions, Iran is now reportedly looking to Iraq to provide a payment channel in a similar way that it looked to Turkey under Obama-era sanctions. But this is a tall order, given that Iraq is struggling to fulfil its current financial obligations to Iran. Last month, Iran’s oil minister criticised Baghdad for failing to pay, through adherence to US sanctions, for $2 billion in Iranian energy imports. At a minimum, Iran is keen to ensure that it will be paid for the services and goods it exports to Iraq.

Therefore, Rouhani’s trip also delivered a strategic message: Tehran expects Iraq to stand by Iran in its economic hardship, in the same way that Iran was the first to stand by Iraq in its fight against ISIS. While Baghdad is set to resist US pressure and maintain close ties with Tehran, it remains to be seen how much it can ease Iran’s pains, especially at a time when Iraq is facing its own challenges in the post-ISIS reconstruction era.

Given the realities on the ground in Iraq, European actors should back efforts by the new Iraqi government to maintain a balance between Iran and the US, and to caution the sides against escalation that could tip Iraq into another cycle of conflict. Furthermore, since they remain committed to the nuclear deal and continued trade with Iran, European governments should consider how best to support Baghdad in its attempts to keep economic channels with Iran open.

Through a series of high-level meetings and agreements with Iran’s president, the Iraqi government signalled that it is not prepared to be part of the US maximum pressure campaign against Iran.

After its sanctions on Iran entered into force, Washington stepped up pressure on Iraq to limit economic ties with Iran. This was an important move, as Iraq is widely viewed as an important channel through which Iran can access the US dollar. The US has also focused on pressing Iraq to reduce its imports of Iranian electricity and gas. And Iraq has requested an extension to the US waivers that allow it to continue importing these vital energy supplies. It seems that Iraq will not meet the US deadline for ending its reliance on Iranian exports – especially those of electricity and gas – and Washington has begun to recognise this fact.

Despite its rhetoric to the contrary, the US is well aware that Iraq cannot abandon Iranian gas and electricity suppliers any time soon. This is especially so given that the Iraqi government fears such a move would risk a repeat of the unprecedented protests seen in Basra last summer. Indeed, one-third of Iraq’s electricity production depends on imports from Iran. According to senior Iraqi officials, it could take between two and three years to create the infrastructure necessary to reduce Iraq’s imports of electricity from Iran. The US has seemingly shifted tactics away from pressure on Iraq, to involving US companies such as General Electric in the rehabilitation of Iraq’s energy sector over the coming years.

During Rouhani’s visit, the Iraqi government reportedly paid back around 10 percent of its $2 billion debt to Iran for gas and electricity imports. Another important part of the discussion during Rouhani’s trip related to the demarcation of the Shatt al-Arab border, which has long been a contentious issue between the two countries. Iran and Iraq declared their serious intention to implement the border agreement under the 1975 Algiers Agreement.

Rouhani’s visit came amid major changes in Iraq’s political dynamics, including in the way that Iraq’s Shia, Sunni, and Kurdish parties perceive the regional and international realities in which Iraq finds itself in the aftermath of defeating ISIS. This can be seen in how Rouhani was received relative to previous Iranian presidents. For example, when Ahmadinejad visited Iraq in 2008 and 2013, Sunni parties objected to the visit, boycotted meetings with him, and issued strong statements against Iranian influence in the country. This time, no senior Iraqi politician complained about Rouhani’s visit. In fact, a week before the trip, Iraqi Parliament Speaker Mohammad al-Halbousi, a member of a Sunni faction, travelled to Tehran. There, Halboussi commented that “without Iran’s support and protection, Iraq would not have been able to defeat ISIS.” And, at a press conference with Rouhani in Baghdad on 11 March, Salih commented: “our relationship with Iran is strong and solid, and it is not only beneficial to Iraq and Iran, but to the countries of the region”.

It is widely rumoured that, in Najaf, Rouhani delivered a message from Iranian Supreme Leader Ali Khamenei to Sistani, asking him to stand with Iran in its current crisis. Sistani appears to be signalling his support for the moderate regional strategy of the Rouhani government – one that is markedly different to the securitised approach of Qassem Soleimani, leader of the IRGC’s Quds Force. 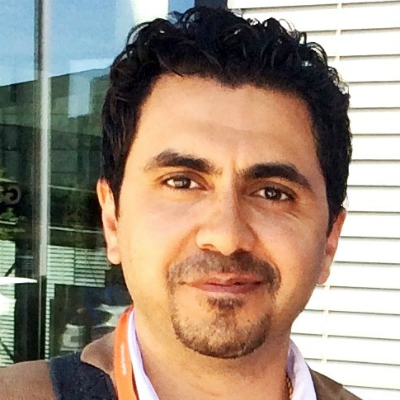