Seen from Berlin, Europe’s ‘make or break’ question currently is the flow of migrants to Europe and its effect. The issue threatens to break both the EU and Angela Merkel’s government. CDU-chairwoman Angela Merkel and CSU-chairman Horst Seehofer have been to the brink at least twice since the refugee crisis emerged, each time risking the break-up of the long standing centre-right bloc of Christian Democratic parties; and each time accelerating the disintegration of the political centre in the one country that appeared unaffected by this trend twelve months ago. For details of the German conundrum see Almut Möller’s analysis on the German party system from late June 2018.

ECFR’s new “EU28 Survey 2018” of  views held by European policy professionals in all 28 EU member states confirms the importance of the migration topic. But it also points to significant differences between member states themselves. Unsurprisingly, the “common immigration and asylum policy” issue dominates in countries most directly affected by migration. However, this issue ranked first overall from a list of priorities over the next five years in all member state governments and think tanks around the EU.

The EU28 Survey is a bi-annual expert poll conducted by ECFR in the 28 member states of the European Union. The study surveys the cooperation preferences and attitudes of European policy professionals working in governments, politics, think tanks, academia, and the media to provide insights into the potential for coalitions among EU member states. The 2018 edition of the E28 Survey ran from 24 April to 12 June 2018. 548 respondents completed the question discussed in this piece. The full results of the survey were published in October 2018 in the EU Coalition Explorer. This interactive data tool helps to understand the interactions, perceptions and chemistry between the 28 EU member states, and is available at https://ecfr.eu/eucoalitionexplorer. The project is part of ECFR’s Rethink: Europe initiative on cohesion and cooperation in the EU, generously funded by Stiftung Mercator.

In general, EU policy professionals prioritise EU-internal topics over traditional foreign policy topics. Among the top five issues shown in the table, only the fifth ranked issue is of genuine foreign policy nature. Immigration and asylum policy leads with 12.2 percent of the vote, followed by issues related to the Eurozone and the single market In 2nd and 3rd place. In fourth place is another Migration related topic, the issue of a common border police and coast guard with 10 percent of the vote. 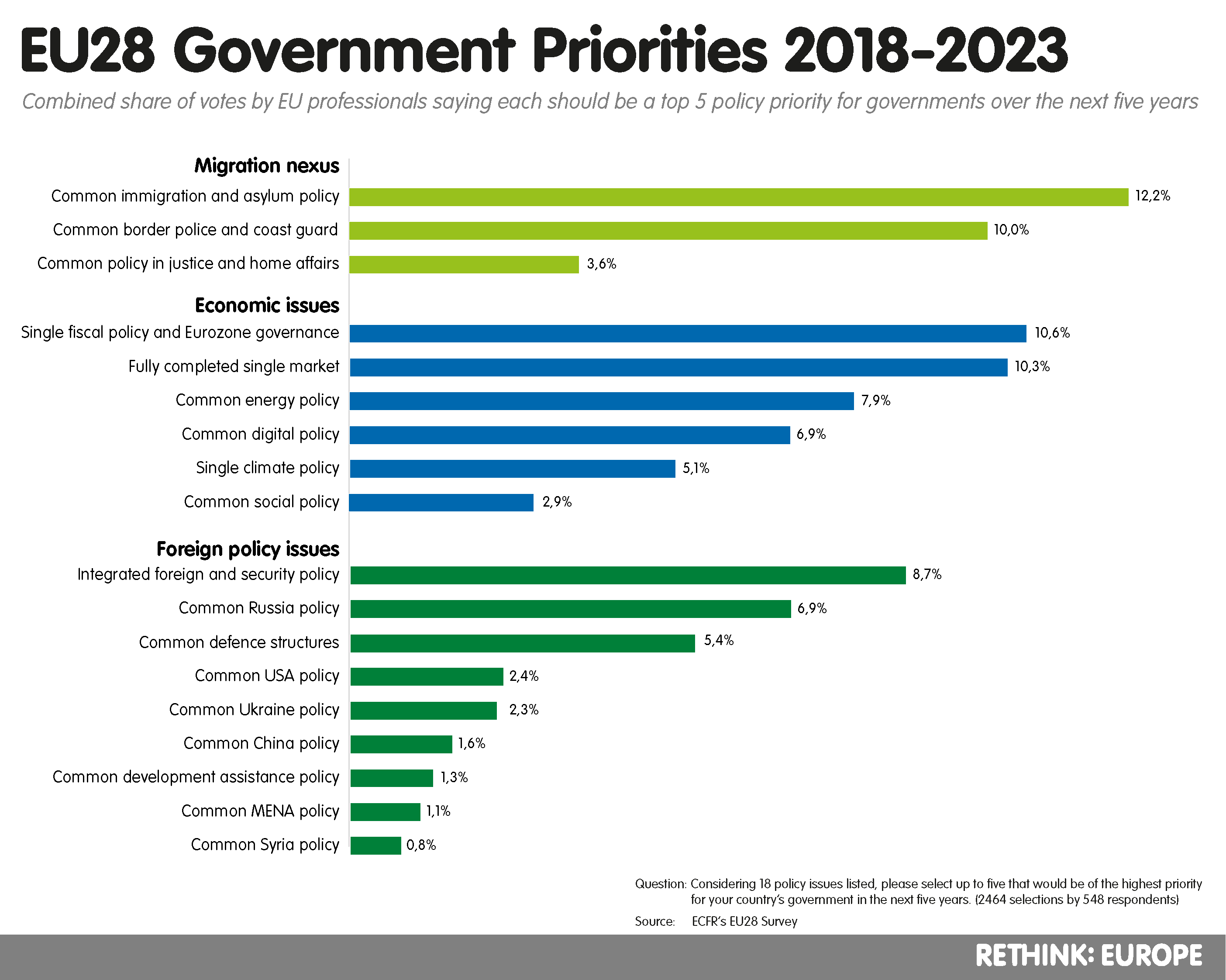 Taking together the four topics of immigration, asylum, border security and cooperation in justice and home affairs, this cluster accounts for 30 percent or more of all votes in twelve out of 28 member states, with the highest numbers in Austria (47.9 percent), followed by Greece, Malta, and Bulgaria. Around the 32 percent mark are Germany, Italy, Spain and Sweden, the Czech Republic, Croatia, Slovenia and Hungary. As the map below shows, the southern shore and the geographic centre are the ones most concerned when it comes to the migration nexus. Meanwhile, Germany and Sweden, the two countries with the largest inflow of asylum seekers and refugees, are toward the bottom of that list with around 30 percent of the vote. 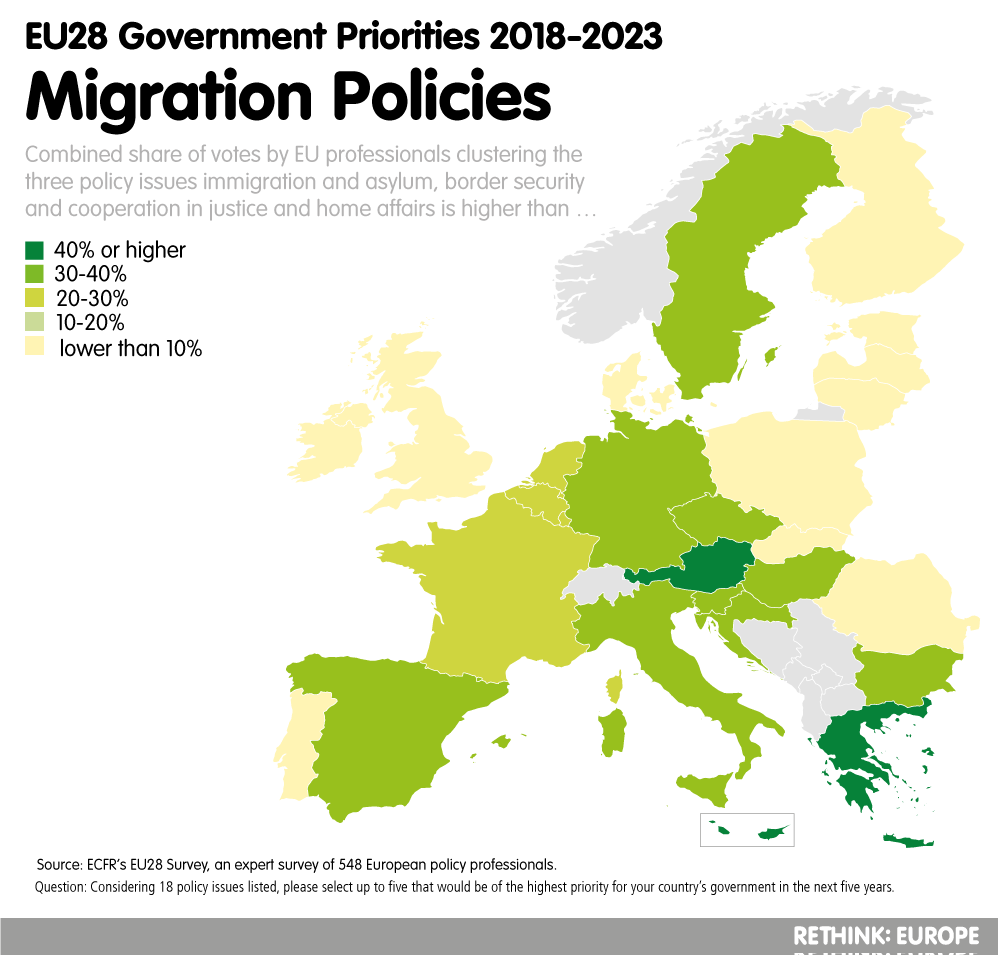 While migration ranks highly, foreign policy topics in general do not top the charts for European policy experts and professionals. The total number of votes for the ten foreign policy issues (out of 18 total issues, see bar chart above) amounts to only a little over one third of the total. For a detailed analysis of EU cooperation on security and defence read ECFR's latest Flash Scorecard “The security fears that keep Europeans awake at night“.

Topics surrounding the economic agenda receive a higher number of votes. The cluster of economic issues—single fiscal policy, a fully completed single market, a common energy policy, a common digital policy and a common social policy—receives more than 30 percent of the vote everywhere except in Germany and the United Kingdom. Furthermore, the combined number of votes for economic issues most clearly outranks migration-related issues in Slovenia, Spain, Croatia, Bulgaria, the Czech Republic, Hungary and Italy.

In addition to migration, the economy, and broader institutional items, most respondents attach great importance to the question of a common Russia approach. The urgency for a common Russia policy is felt most strongly in the Baltic states, Poland, the United Kingdom. Remarkably, the share of votes in Denmark for a common Russia approach is high, while they are surprisingly low in Germany and France. This issue is unique even when viewed in the broader context of relations with the currently major geopolitical powers: the United States, China and Russia. In only six member states, a common policy vis-à-vis the US, China, and Russia amounts to more than 20 percent of the vote – in Poland, the Baltic states, Denmark and the UK- with the majority of that vote driven by concerns relating to Russia. 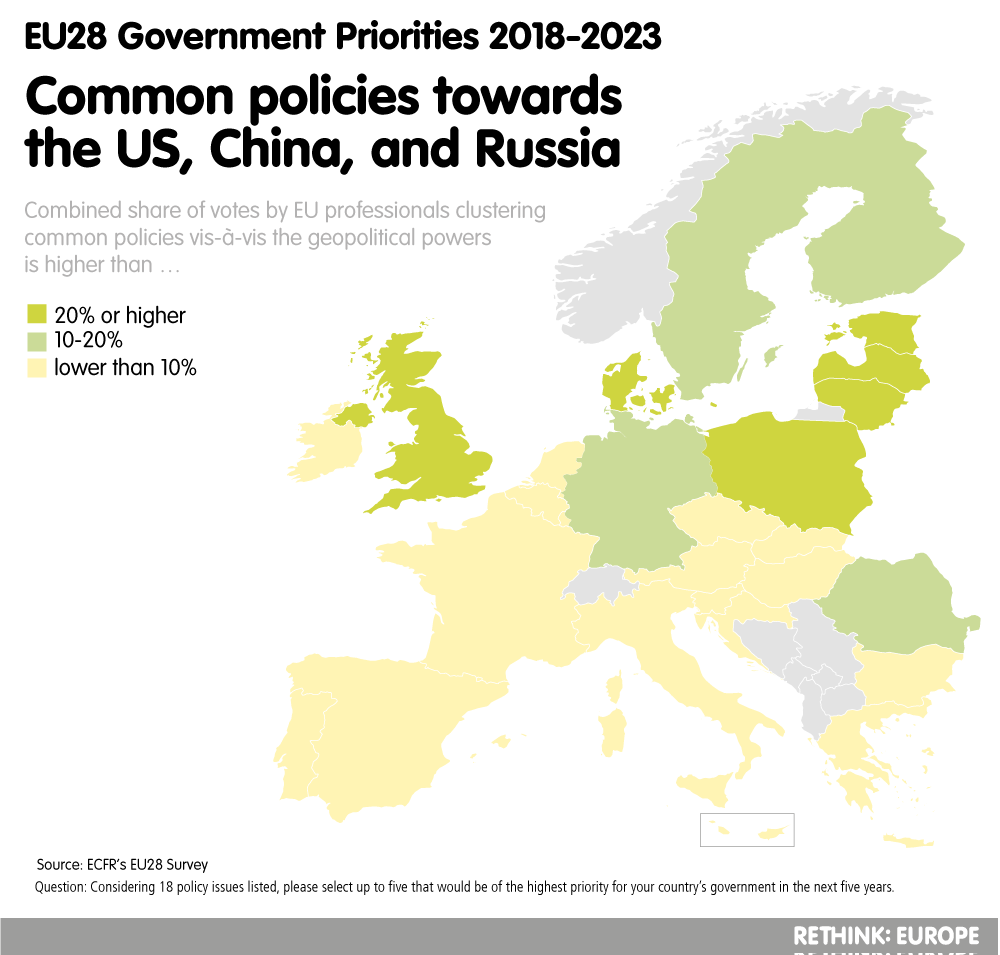 The main message of this section of the EU28 Survey is that domestic trumps international. However, it is difficult today to separate the two spheres—they influence each other inevitably. What becomes clear in this survey is that foreign policy finds its way onto the political agenda through issues outlined here rather than through conflict or a traditional international crisis. At present, the strategic consensus among EU capitals appears to be rather low, as priorities and preferences differ strongly depending on the exposure of individual member states to the respective topics. This weak consensus will hamper Europe’s international role as long as governments around the EU don’t share risk perceptions and strategic priorities independent of their geographic location or exposure to the problem.