Europe should support the recent Iranian-Saudi talks in Baghdad as an opportunity to help stabilise the Middle East, despite risk of that engagement being derailed

The Biden administration has boxed itself into a maximalist position that jeopardises efforts to make the Iran sanctions programme more humane. European governments should be pushed to change course.

Force of habit: Why the US risks being sucked into a military showdown with Iran

Fool me once: How Tehran views the Iran nuclear deal 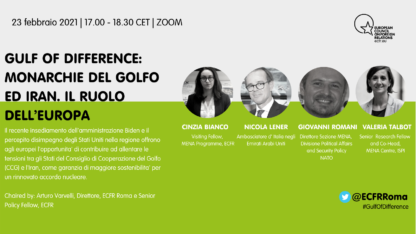 The narrow path to agreement: How Europe should support the Iran nuclear deal

If European governments want to salvage the deal before it is too late, while also opening up the prospect of negotiations with Iran on regional security, they need to quickly and clearly reject the argument that the two issues should be bundled together

A call for Europe to bolster transatlantic diplomacy on Iran