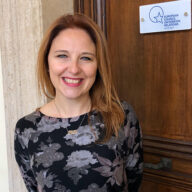 Teresa Coratella is the programme manager at the European Council on Foreign Relations’ Rome office.

Coratella joined ECFR as an advocacy and communications officer in February 2011. Previously, she worked for the Warsaw-based Institute for Eastern Studies as programme assistant in charge of partnerships and development. She contributed to the organization of high level international conferences on foreign policy issues in several European capitals. She holds an MA in European Interdisciplinary Studies from the College of Europe, Natolin Campus, with a focus on the EU as a regional actor. She holds a BA in International Relations and wrote her final dissertation on Polish foreign policy between 1989 and 2004. Coratella is a member of WIIS(Women in International Security). She is a native speaker of Italian and Polish and speaks fluent English and basic French.

Poland and Italy: Best of frenemies

Russia and migration remain issues that divide the Polish and Italian governments from each other. And such disharmony could yet stymie cooperation between right-wing populists after the European Parliament poll.

May's European Parliament election will shape the future of Italian political parties – will it enable traditional mainstream parties to stage a recovery?

Ahead of Xi Jinping's visit to Italy, China's Belt and Road Initiative (BRI) has joined the long series of issues that divide Italy's ruling parties

Matteo Salvini has launched the “League of Leagues” – an alliance of nationalist parties across the continent. And he brings friends.

Italy plays in the Penta League

Can the unlikely bedfellows of the Five Star Movement and the League really make government work?

The primary European issues in the Italian election debate are migration, the future of the eurozone, and security/defence.

The End of the World #14: Interview with Martin Wolf

In this new episode of our summer series, ECFR's director Mark Leonard and Policy Fellow Anthony Dworkin talk with Martin Wolf about the economic origins…

Whatever it breaks: Draghi’s downfall and the future of Italy

Draghi always knew that he could not depend on some members of his ruling coalition. Yet his legacy of leadership in the EU could survive his departure.

Draghi’s approach to Italian and EU policy on Russia is at odds with the public mood in Italy. He will need to act quickly if he is to convince voters at home to support his foreign policy choices.

Russia’s war on Ukraine has prompted urgent changes in Italian foreign policy. Rome’s efforts to distance itself from Moscow are creating major challenges at home.

Rome advantage: The Draghi government and Europe’s balance of power

With Mario Draghi staying on as prime minister, Italy has an opportunity to help lead an economic and political recovery from the pandemic that secures Europe’s future

The Quirinal Treaty: How France and Italy can promote environmental action and European sovereignty

Views from the capitals on COP26

COP26 concluded on 13 November with the Glasgow Climate Pact, an agreement that sets out the next phase of the fight against climate change. The pact may have disappointed many, but views of it vary a great deal depending on where you sit. Below, experts from three of ECFR’s offices – in Rome, Paris, and Berlin – discuss the implications of the deal.

What they want: Rome’s views on the new German government

Italian Prime Minister Mario Draghi has an opportunity to build a relationship with the next German chancellor that is free from party political rivalries. In doing so, he should focus on four main issues at the heart of the German-Italian relationship.

Italy’s next bid for victory: The EU and green geopolitics

Out of the south: Why Italy and Portugal should lead on climate change, health security, and multilateralism

Italy and Portugal will follow a common, coordinated strategy on key policy areas as presidents of the G20 and the EU respectively

Italy has been among the top beneficiaries of pan-European support from citizens, institutions, and governments – as ECFR’s new European Solidarity Tracker shows

The End of the World #14: Interview with Martin Wolf

In this new episode of our summer series, ECFR's director Mark Leonard and Policy Fellow Anthony Dworkin talk with Martin Wolf about the economic origins… 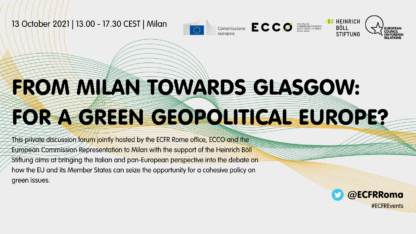 From Milan towards Glasgow: for a Green Geopolitical Europe?

How can the EU and its member states seize the opportunity for a cohesive policy on green issues?

European capitals could finally understand how a stable and proactive Italy is beneficial for the stability not only of Italy itself, but also of the whole EU

The big test for her will be to see if she manages to use the electoral victory as a way to completely reshape her party. But, as of today, I don’t think there is much she can do.

Her political view is a purely nationalistic, which could represent a serious threat to the EU project

Teresa Coratella comments on the candidates in Italy’s election

Italy today feels a bit like it did the 1970s