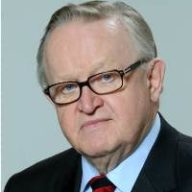 Chairman of the Board and Founder, Crisis Management Initiative
Former President of Finland

Martti Ahtisaari was elected President of Finland in 1994. Upon leaving office in 2000, he founded the Crisis Management Initiative. A UN diplomat and mediator, Martti Ahtisaari is noted for his international peace work in Namibia, Indonesia, Iraq, Central Asia, Kosovo and Northern Ireland, among other areas. He was awarded the Nobel Peace Prize in October 2008, “for his important efforts to resolve international conflicts”.

Ten reasons for a European ‘yes’

There are 10 good reasons for Europeans to support enhanced UN status for the Palestinians. There is also an eleventh reason: the 27 EU nations can show that they count on the world stage if they are able to stick together.

Europe must fulfil its responsibility in Kosovo