This article was published in Project Syndicate.

One year ago, on 17 February 2008 Kosovo declared its independence and has so far been recognised by over fifty countries representing close to sixty percent of the worlds economic power. Interethnic violence has largely been avoided and the mass exodus of Serbs predicted by some has not occurred. The Comprehensive Proposal for the Kosovo Status Settlement (the “Ahtisaari Plan”) which provides for international supervision of Kosovo’s independence is gradually being implemented. A large civilian EU mission has been deployed.

Unfortunately, we still cannot turn the page on this pernicious conflict which has led to so much tragedy and has been the cause for instability in the Balkan region for much too long. Serbia persists in its rejection of the new reality and is doing everything in its power to prevent normalisation. On orders received from Belgrade, Kosovo Serbs, representing some five percent of the population, refuse to cooperate with the government of Kosovo and the EU mission. In doing so – and this is the irony of the matter – Serbs themselves are preventing the early implementation of wide-ranging community rights foreseen in the Ahtisaari Plan in order to bring them a normal and secure life. On the international level, Serbia – with strong support from Russia – is actively engaged in blocking Kosovo’s accession to the UN and other global or regional organisations.

It is difficult to comprehend what Serbia aims to achieve. Nobody will deny that for any state the separation of parts of its territory, even if largely populated by a different ethnic group, is a painful matter. Still, there are examples in recent history when this has been achieved in a consensual manner. In the case of Kosovo it is clear that after the brutal actions of the Milosevic regime in the 1990s, including repression, massive human rights violations and large scale expulsions of Kosovo Albanians which prompted NATO to intervene and the UN to take over the administration of the country, a return to Serbian rule has become unthinkable. Serbia’s democratic leaders of today must understand that the loss of Kosovo – although not of their doing – is an irreversible reality with which they have to come to terms. All they can achieve with their present policy of rejection is to delay the much-needed stabilisation of the region following the break up of Yugoslavia and to make life miserable for Kosovo and its people. Would it not be wiser to give a helping hand to the infant state, turning hostility into friendship and thus securing the continued presence of Serbs in Kosovo for the future?

Kosovo is a European problem and the EU has the prime responsibility to turn it into a success story. Regrettably, the Union’s inability to agree on a common policy has not only weakened its role on the international level but has also become a major obstacle to determined action in the country itself. The five member states which continue to withhold recognition of Kosovo should be aware that their stance encourages those who deny the EU mission any cooperation and impede its work. It also makes it infinitely more difficult for moderate forces in Serbia to adjust to the new situation. Only a unified EU position combined with the knowledge that EU accession is unthinkable as long as this conflict has not been fully resolved may over time lead to a change of attitude in Belgrade. Kosovo, on the other hand, needs a clear European perspective and unhesitating help to meet the daunting challenges it is facing. At the moment both are missing.

Nobody should be misled by the relative calm obtaining in Kosovo at this time. The Balkans’ recent tragedies have shown that problems which remain unattended sooner or later turn into open conflict and the costs become unbearable for all. There is no time for complacency. Those concerned should take to heart what President Obama said in his inaugural speech: “Our time for standing pat, of protecting narrow interests and putting off unpleasant decisions – that time has surely passed”. 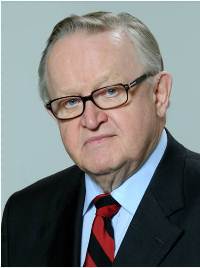