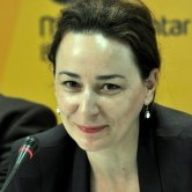 Engjellushe Morina is a senior policy fellow with the Wider Europe Programme at the European Council on Foreign Relations. She works from ECFR’s Berlin office.

Morina has more than 18 years’ experience of research on, and fieldwork in, the Western Balkans, Euro-Atlantic integration, peacebuilding and conflict transformation, violent extremism, and dialogue and mediation. Prior to joining ECFR, she developed and led collaborative research projects on violent extremism and managed other initiatives such as a 1.5 track dialogue in North Macedonia. During the high-level negotiations over Kosovo’s political status led by President Marti Ahtisaari, she served as an expert and consultant in the Cultural Heritage group within the Unity Team (2005-2007). Her work focused on the protection of Cultural and Religious Heritage in Kosovo. Morina co-founded and ran the Pristina Council on Foreign Relations. She was the executive director of Kosovar Stability Initiative and worked for the US Embassy in Pristina. Morina has also conducted fieldwork in Egypt, Italy, the United Kingdom, Ukraine, and Kyrgyzstan.

Regardless of the result of the US election, it is up to the EU to show robust leadership and gain credibility in the dialogue between Kosovo and Serbia

Why the EU should lead talks between Kosovo and Serbia