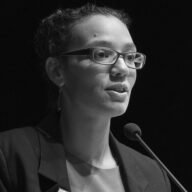 Dr. Amandine Gnanguênon is a visiting fellow at the European Council on Foreign Relations.

She is a political analyst, who held several positions in the French government, think tanks and advised international organizations. She worked as a Senior advisor consultant for the Friedrich Ebert Stiftung on African collective security mechanisms and for the French Development Agency (AFD) on Early warning systems. She also contributed to the first edition of the United Nations Office for West Africa and the Sahel (UNOWAS) Conflict Analysis Handbook. She was previously project officer on regional security at the French embassy in Dakar and senior researcher at the Institute of Security Studies (ISS) in Dakar. She also headed the sub-Saharan Africa programme at the Institute of Strategic Research, Ecole militaire (IRSEM), French MoD think tank, in Paris.

Dr Gnanguênon was the director of War and Political reconstruction project (2012-2016), hosted by the Institut des mondes africains (IMAF) at the School for Advanced Studies in the Social Sciences (EHESS), winning project “Emergences Program” of Paris City.

She holds a PhD in political science from the University Clermont Auvergne. She was awarded a scholarship from the French Ministry of defense to conduct her PhD thesis on the evolution of regional multilateralism (European Union, United Nations, African Union and Regional Economic Communities) to deal with  system of conflicts in sub-Saharan Africa. She regularly gives lectures (NATO Defense College, Chatham House), trainings and media interviews in Europe and Africa.

Regional organisations have proliferated in Africa, with many organisations attempting to address similar issues in similar parts of the continent. Europeans should take stock of the situation they have helped create.

How is covid-19 changing the transatlantic relationship?

How will the tensions around the response to the coronavirus play out through the recovery from this crisis? Can EU states, with their diverse perspectives…