In August 2017, my ECFR colleague Christoph Klavehn found that, based on data in the 2016 EU Coalition Explorer, the United Kingdom “ranks as one of the best-integrated EU member states when it comes to the invisible web of cooperation relationships that connects European capitals”. However, he argued, after Prime Minister Theresa May sent the UK’s divorce letter to Brussels in March that year, European capitals started to look beyond Brexit, and to rethink their patterns of interaction with the country. “Add the reshuffling of several of Europe’s central cooperation relationships to the growing list of Brexit implications”, he concluded.

Today, with the Brexit negotiations ongoing, the March 2019 deadline for the UK’s departure (as stipulated under Article 50 of the Lisbon Treaty) draws close. Yet beyond the political drama in Westminster that has made headlines in recent months, what has happened to the coalitions between European capitals? What does ECFR’s latest survey of more than 800 policymakers and experts across the EU28 tell us about European perceptions of the UK as it leaves the EU?

In short: London has reason to worry. The survey suggests that the UK needs to mend its relationships across the EU at a fundamental level. Member states perceive the country as having been, equal with Poland, the second most disappointing EU country in the past two years (they see Hungary as the most disappointing). Disappointment with the UK is highest among respondents in Ireland, and very high in Slovakia, Germany, Poland, and Spain – as well as Denmark and Sweden, the UK’s traditional allies within the EU. The Netherlands, another key traditional partner of the UK, seems to have already digested the prospect of Brexit, as reflected in its comparatively low levels of disappointment. Accordingly, the Netherlands has in the past two years cemented its pivotal EU role alongside France and Germany.

As in 2016, EU member states contact the UK more often than all but two other countries (Germany and France), and perceive the UK as the fourth most responsive EU country (after Germany, France, and the Netherlands, and equal to Sweden). This is unsurprising given that the UK is still a full EU member, all EU capitals have an interest in where the country is headed, and well-established relationships do not disappear overnight. The UK’s overall influence within the EU is now far less than that of France and Germany, and slightly less than that of the Netherlands.

Indeed, several policy areas show signs that the UK’s looming departure from the EU has diminished its influence within the bloc. In 2016, the country had more influence on EU fiscal policy than all member states aside from France and Germany; two years later, Italy’s influence on fiscal policy has surpassed that of the UK (in this context, one should keep in mind that influence can be either constructive or disruptive). Although the UK continues to have greater influence on EU foreign, security, and defence policy than all but two other member states, this influence has declined significantly since 2016.

ECFR’s 2018 survey is even more telling when it comes to shared interests. In 2016, respondents perceived the UK as sharing more of their country’s interests in EU policy than any other member state except Germany. By 2018, the UK had dropped to fourth place in this measure (below Germany, France, and the Netherlands). It may well be that the EU27 still believe that they have significant shared interests with the UK – which would explain why perceptions in this area have not changed even more – but they seem to assume that these interests no longer matter as much as they once did, as the UK will soon no longer be a player in the EU arena. 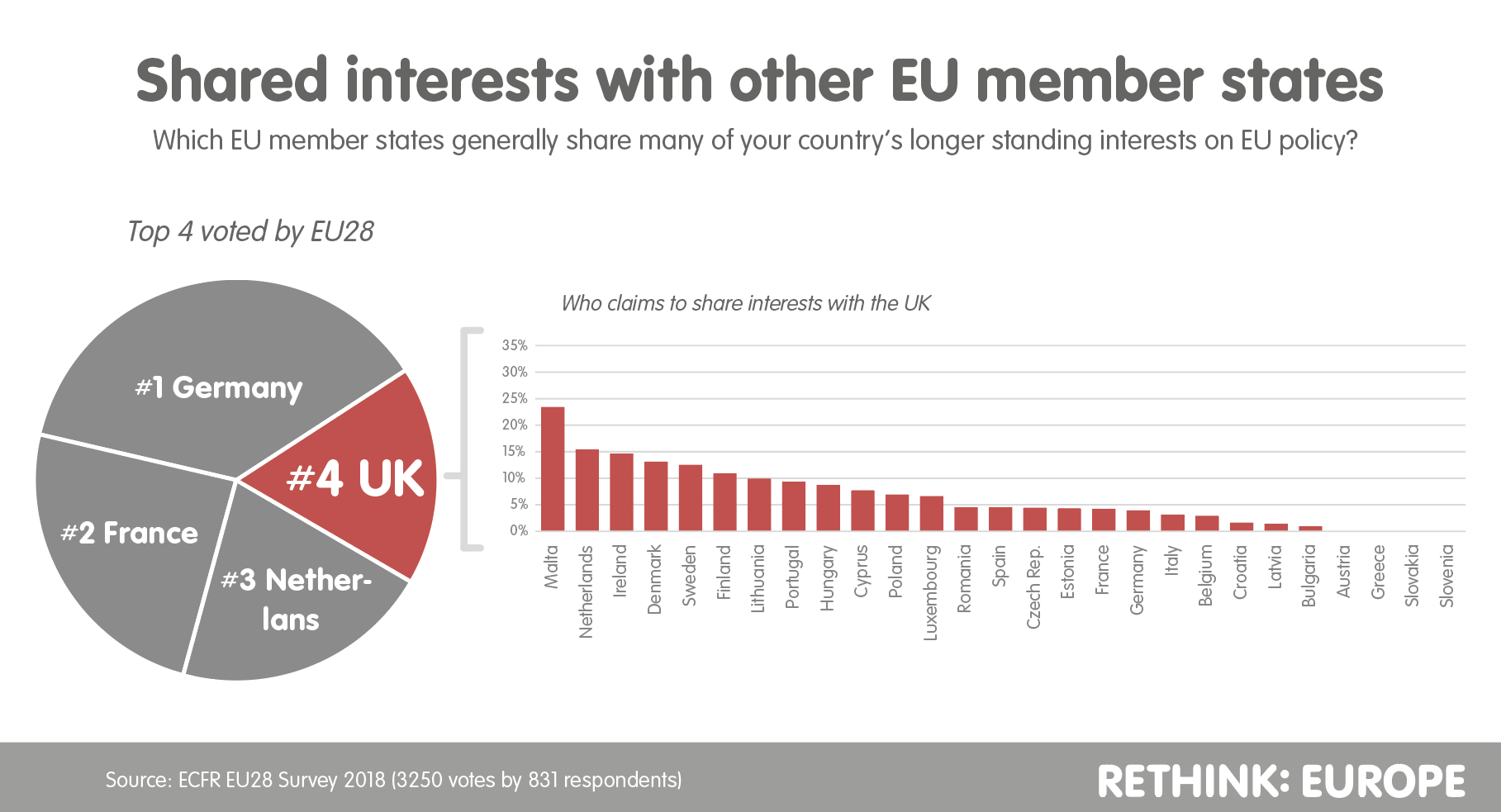 Facing the prospect that they will no longer be involved in EU meetings, the British will have to invest a great deal in their web of relationships across EU capitals. May’s government has already decided to beef up its presence in Brussels after Brexit, and it is rethinking its bilateral relations across European capitals too. But to be able to mimic the role of an EU member in future, London will have to think hard, fast, and smart. The decline in the UK’s standing in the EU will likely become much clearer after March 2019. Against this background, London would be well advised to devise a more effective strategy for dealing with the EU and its member states in the coming months (while it is still an EU member). This would lessen the impact of the UK’s departure once it takes effect. As ECFR’s EU28 survey reveals, there are likely to be a range of policy areas and partnerships across the EU that London can invest in, and that can make a real difference to the UK’s future standing in Europe.