As a series of meetings in Brussels last month underlined, fears about migration continue to divide EU member states more than almost any other issue. Italy and Greece want a greater number of the refugees who arrive on their shores to be relocated to other parts of the European Union. In contrast, Germany aims to limit the secondary movement of migrants out of southern EU countries. France’s president – who wants member states to share responsibility for hosting asylum seekers – likely seeks a European middle ground to demonstrate that the EU can solve its migration problems. Meanwhile, ruling parties in several other nations – those in Central Europe, most of all – have no interest in quickly ending a migration crisis that has boosted their popularity at home. Indeed, they may want to further capitalise on domestic anxiety about migration in the lead-up to the 2019 European Parliament elections. As has become abundantly clear in recent years, these conflicting concerns make it hugely difficult for member states to discuss – let alone reach a compromise on – solutions to the crisis.

Yet Europeans’ often incompatible positions on such solutions, as well as on EU asylum policy reforms, go beyond political concerns and individual ambition. As ECFR’s new Security Scorecard shows, they also reflect diverging perceptions of the security challenges Europe faces. 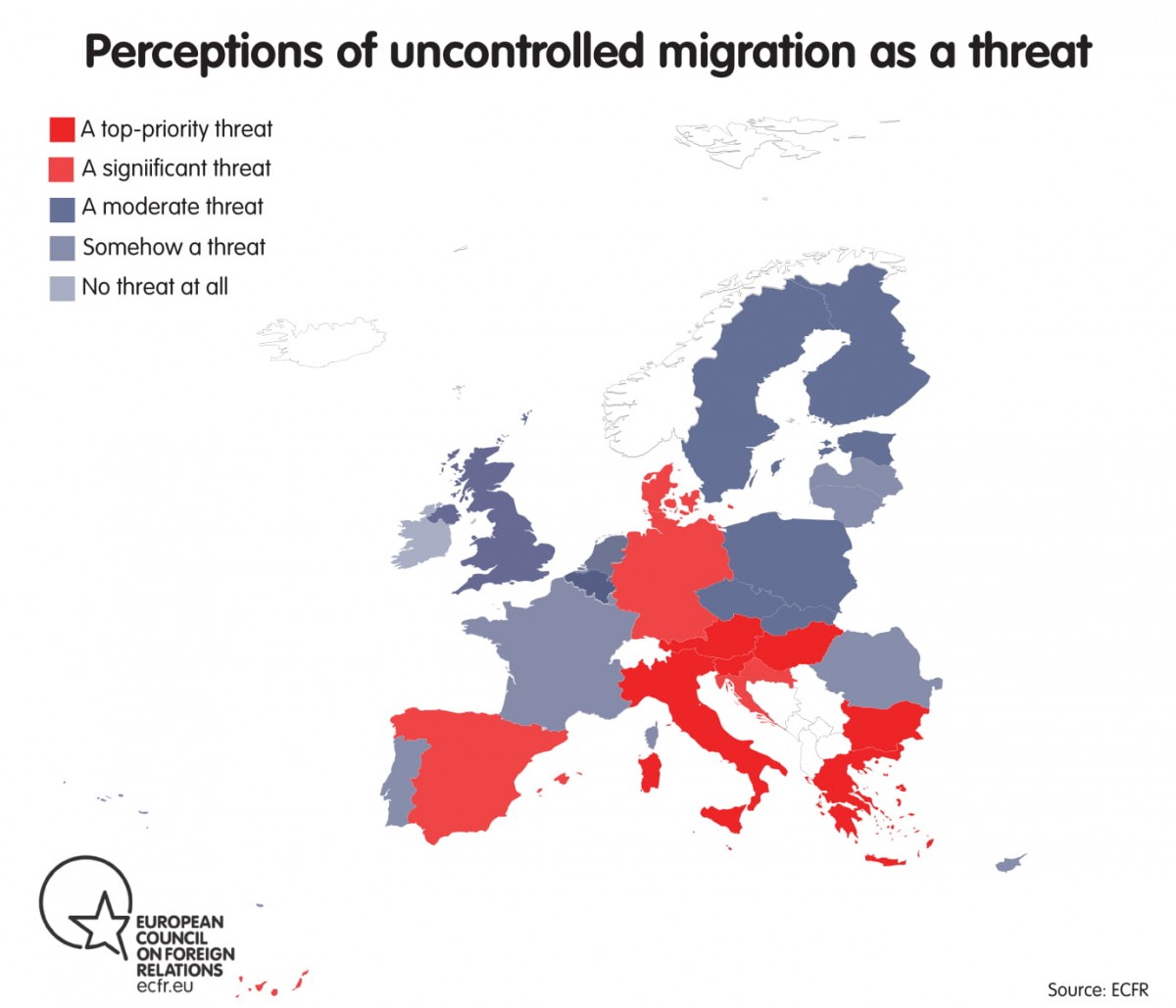 All EU governments, with the exception of that in Ireland, see uncontrolled migration as a national security threat – albeit to widely varying degrees (see map above). Italy, Greece, Bulgaria, Malta, Hungary, Austria, and Slovenia view uncontrolled migration as a top priority threat, because they are either transit points (on the way to northern Europe) or destinations for most refugees who enter Europe. Germany, Denmark, Spain, and Croatia see the issue as a significant threat, while 16 other countries perceive it as a medium or low threat.

Given these differences, it is no surprise that EU member states struggle to agree on anything concerning migration. A lack of empathy may be part of the problem: it is difficult for most countries to take on a few allies’ sense of urgency about uncontrolled migration. Paradoxically, it could be thanks to this relative indifference that political interests (rather than strategic concerns) play a lead role in resolving the migration crisis.

As ECFR’s Josef Janning argues in his analysis of EU priorities over the next five years, there appears to be little strategic consensus between European capitals on the migration crisis – due to their vastly different experiences with the issue. Therefore, when some political leaders in Poland, the Czech Republic, or Germany talk about migration in almost apocalyptic terms, they may be merely trying to maximise their popularity at home and negotiate the best possible deal for their countries with the rest of the EU.

As a consequence, a pan-European political bargain on migration could be a long time coming. Intra-EU negotiation is usually a slow process that draws in many policy issues (such as the rule of law, access to European funds, and Eurozone reform), perhaps causing further damage to the EU’s already shaky sense of unity.

Still, EU members differ on more than just the degree to which they see uncontrolled migration as a threat – and as part of the security realm. They also hold varying perspectives on why migration from Africa and the Middle East specifically is a security matter for them. As ECFR’s Security Scorecard shows, this kind of migration is a low security priority for only Ireland, Cyprus, Romania, Estonia, and Lithuania – with the remaining 23 EU member states seeing it as an important, or the most important, security challenge they face. 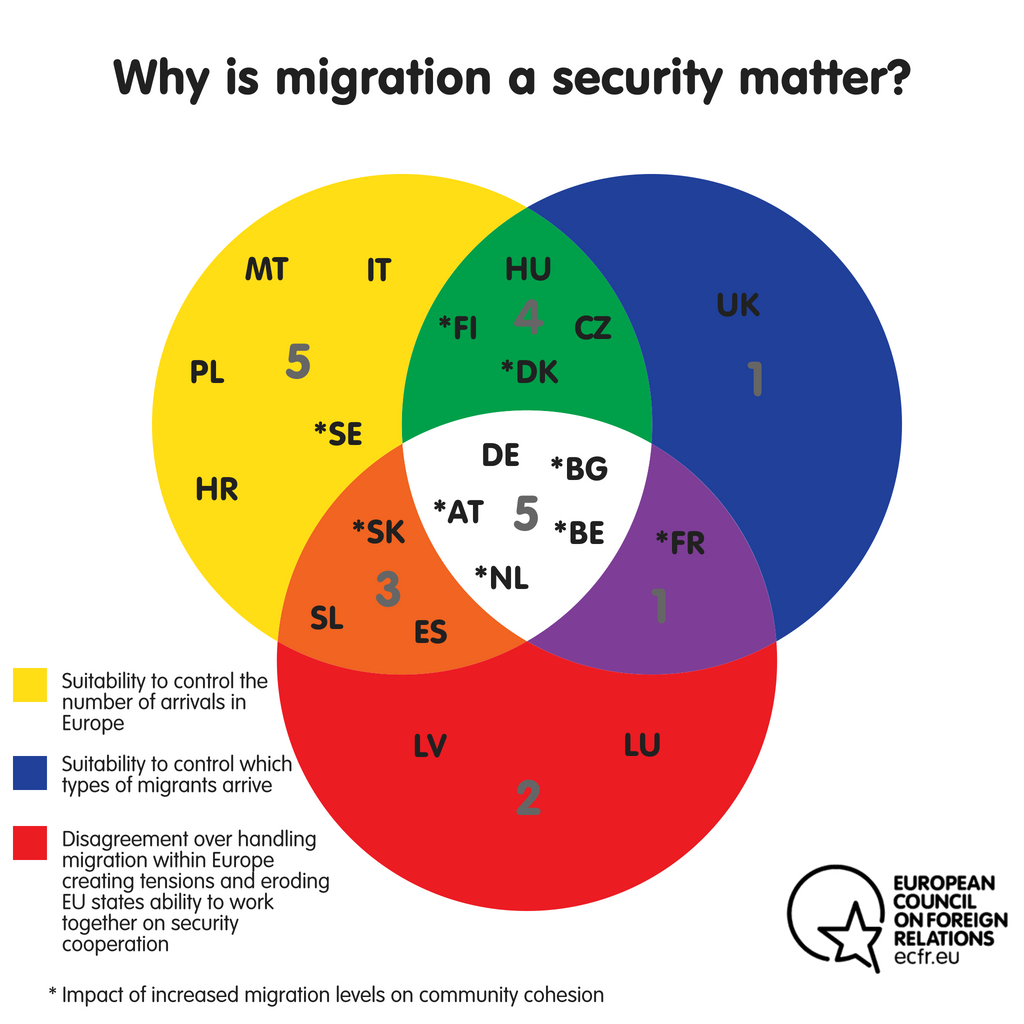 Migration from Africa and the Middle East is a complex matter for these 23 countries (see diagram above). For 17 EU states, the leading migration concern is the EU’s perceived inability to control the number of migrants arriving in Europe. For the others, it is the EU’s inability to control the types of migrants arriving there. Meanwhile, 11 member states fear that disagreements over intra-European migration will erode EU members’ ability to engage in security cooperation. And nine are concerned about the impact of increased migration on their country’s social cohesion. Greece is a case apart: its major concern is other countries’ unwillingness to host more migrants.

Four overall trends seem to have emerged. Firstly, the fact that the most widespread concerns centre on an inability to control arrivals in Europe likely explains the EU’s current focus on the issue. Of course, many migration challenges are closely linked to border control. But European leaders should be careful not to ignore other concerns (such as those about social cohesion). Limiting the number of arrivals in Europe is not a silver bullet for the migration crisis, because the crisis is essentially political (rather than one of numbers).

Secondly, 13 EU members have two, three, or four significant migration concerns. It is not just Austria, Bulgaria, and Germany – among the most active participants in the current debate – that see migration as a particularly complex security matter. France, Denmark, Belgium, the Netherlands, and Finland all do too, despite often being less vocal on the issue. Their long experience with the challenges of integrating multicultural societies has made them aware of the multifaceted nature of the migration – in contrast to countries with a relatively homogenous demographic makeup.

Thirdly, Poland, Hungary, and the Czech Republic (the Visegrád countries, minus Slovakia) appear to have little understanding of the damage that disagreements over migration policy could cause to EU cooperation more broadly. In contrast, such spillover is among the major concerns of Germany, France, and nine other EU members. These Visegrád countries should not be surprised if other member states begin to doubt their commitment to the EU’s solidarity and values, potentially increasing opposition to their agenda within the Union on a range of issues.

Finally, it is too early to say whether migration is a sui generis issue that will break the EU. But, if it does, this will be because of the predominantly political character of the migration crisis – rather than any kind of European objective or vulnerability to external threats stemming from migration. The good thing is that, ultimately, no EU government wants the Union to disintegrate. Nonetheless, many member states currently feel that their concerns about migration have primacy, are exceptional, and/or receive too little attention from their European allies. In light of this, it is unclear whether they can avoid the unintended security consequences of a political crisis very much of their own making.