The grouping of the biggest member states in the EU – coined ‘the Big Six’ in academic circles as well as in journalism – is founded on size-related commonalities rather than geographical rationale. The heavyweights cluster together in different constellations. The ‘Big Three’ (Germany, France, and the United Kingdom) habitually join forces with Italy and Spain (respectively, the ‘Big Four’ and ‘Big Five’). Two years after the 2004 EU enlargement, Poland joined the informal, regular gatherings of the then six large member states’ ministers of the interior.

ECFR’s EU28 Survey 2016 – conducted among policy professionals and expert observers from all 28 member states after the Brexit referendum– provides insight into which big member states share most interests, contact one another first or most often, and find each other most responsive. Figure 1 shows that all Big Six members are linked to each other, to differing degrees. The width of the lines and the arrow-heads represent the average strength of ties. 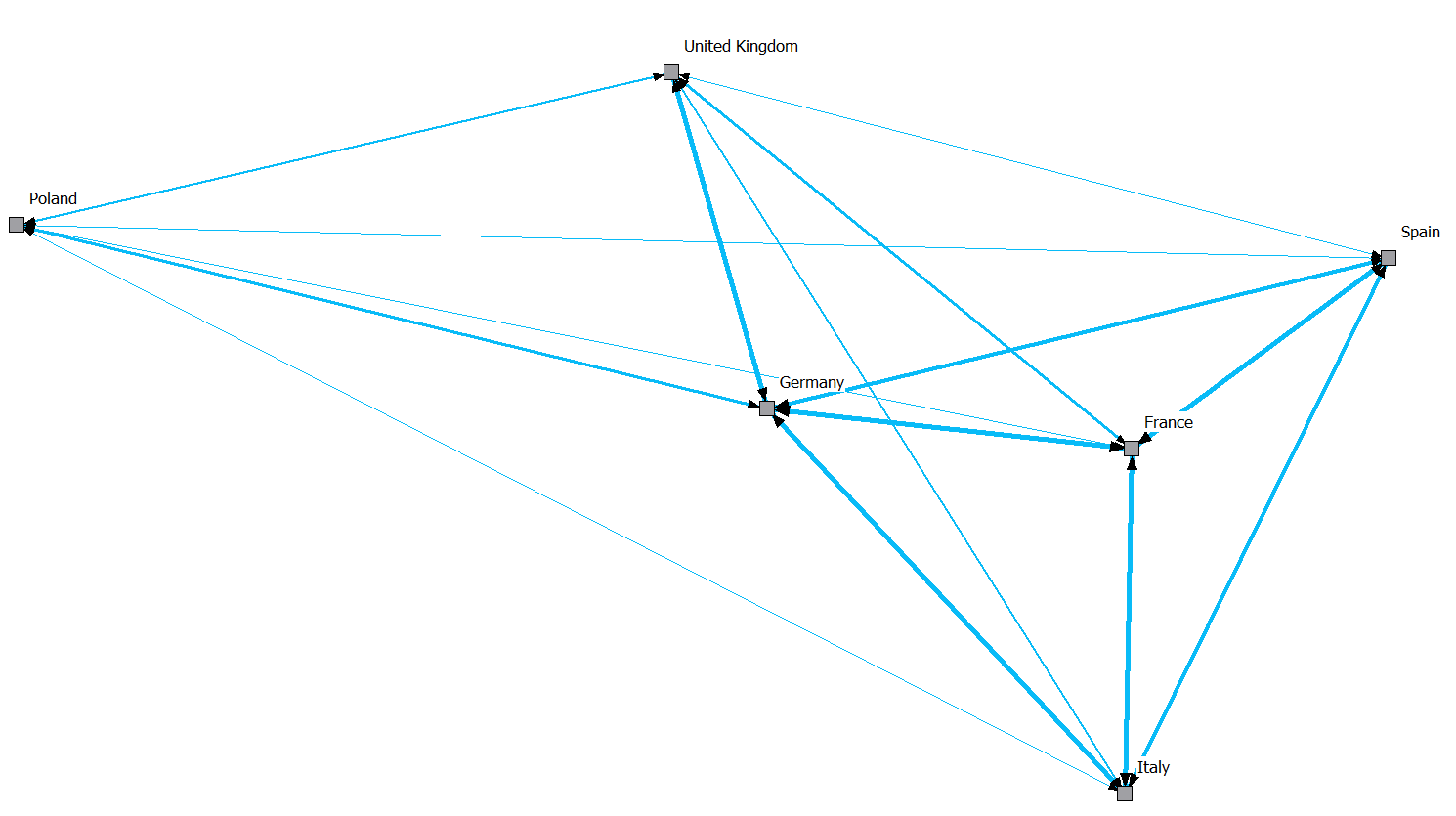 Figure 1 is based on the accumulated data from the EU28 Survey questions: “In your view or experience, which other governments: would your own government generally contact first and/or most on EU matters?; (“…”) generally share many of your own country’s interests and preferences on EU policies?; (“…”) and have shown to be most responsive or are easiest to work with? (select up to five).”

Filtering out weak inter-group ties and taking into account (failing) reciprocity rather than the average tie strength, results in a simpler graph which depicts the degree of centrality of the group members with more clarity (see Figure 2). The place of the nodes in the figure corresponds with the central/peripheral position of the actor in the network. Most notable are Germany and Poland as respectively the most and least central actor in the Big Six network. The former receives ‘votes’ from all – being the focal point of the grouping, the latter from none of the other heavyweights, being an outlier really. What is more, even after having decided to leave the EU, the UK still is the second most central among them –three arrows point to it, just like France. 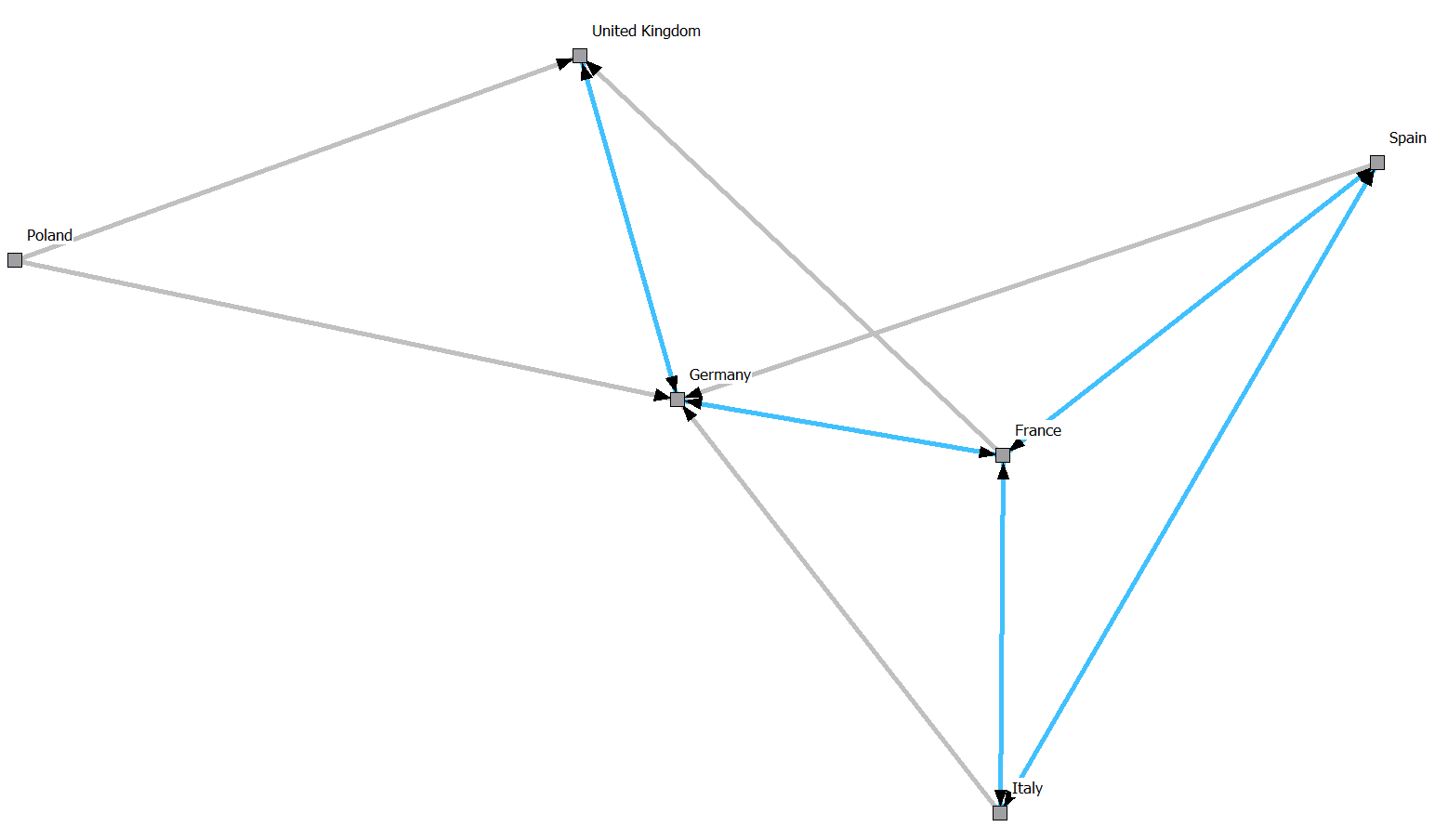 Figure 2. is binarised (threshold ≥ 0.075). The threshold is based on the average tie-value in the Big Six (0.0795). In contrast to the blue ties, the grey ties are not reciprocated above the threshold level.

Aside from revealing the ‘load-bearing structure’, Figure 2 also allows us to assess the bilateral and trilateral inter-group ties that exist within this network.

Scholars have cited the underdeveloped cooperation between France and Poland as the structural problem that incapacitates the Weimar Triangle (Germany, France, and Poland).[1] While of strong symbolic value because of its declared common European responsibility, ECFR’s EU28 Survey demonstrates that this constellation is something less than triangular, comprising a German-French and German-Polish thread. Furthermore, in September 2016 German policymakers and expert observers participating in the survey indicated that Berlin does not value Warsaw as much as vice versa (see Figure 2).

With the German federal election due on 24 September, Angela Merkel’s party manifesto has stated its aim of kick-starting the Franco-German engine, as well as reviving the Weimar Triangle. However, it takes three to tango. The Polish-French relations under newly elected Emmanuel Macron and Andrzej Duda are at a new low point. During his presidential campaign, Macron threatened EU sanctions on Poland for violating European rights and values. Moreover, his ambitious plans to rebuild the EU around a club to which Poland does not belong (that is, the eurozone) might lock Poland into the east even more. Brexit might induce Poland to let go of the grudge it holds and bridge the structural gap with the French. Warsaw holds London in high esteem (see Figure 2), but, were it to focus solely on Germany, the focal point of the grouping, its position in the future Big Five network would be weakened. With no alternative partners to realistically go to, Poland would be rendered strategically irrelevant to Berlin. In fact, the first signs of such a rapprochement with Paris are already visible: Duda intends to reverse the course set in by the right-wing Law and Justice party government, which preferred a new partnership with the UK over a junior partnership in the Weimar Triangle (see Figure 2).[2] In any case, as others, such as Vivien Pertusot, have argued, even in case of real symmetry, where Poland’s relationship with France was as strong as with Germany, no Weimar Triangle could replace the exceptional Franco-German axis on which it is modelled.[3]

Other constellations following the ‘France and Germany + 1’ formula do actually make for a triangle – albeit with one unbalanced side. ‘The Big Three’ has been characterised as a constant balancing act between three member states that all share commonalities and have fundamental differences, but in which the relationships with the UK are generally weaker.[4] Figure 2 visualises that they do make for a trio, with the Franco-British edge being unbalanced. British respondents reveal the UK to be the only big member state to focus strongly on one country after the Brexit referendum, namely Germany. Metaphorically speaking: the ‘love’ sent to the UK from France remains unanswered. With Britain gone (the only other large country to which Berlin is returning its favour besides France), Berlin will need to reorientate more strongly than Paris, since France is already reaching out to all big member states apart from Poland (see Figure 2).

The EU28 Survey demonstrates that the Berlin-Paris-Rome triangle has one unbalanced side too: the uneven German-Italian relationship (see Figure 2). Germany and France supposedly used to reach out to Italy individually, each circumventing the other in order to mutually demonstrate their own power.[5] Such competitive dynamics might now belong to a bygone age – a case in point being the Versailles summit in March this year, where France, Germany, Italy, and Spain plotted the EU’s post-Brexit feature. Just like Rome, Madrid will likely profit from London dropping out, possibly developing a strong, reciprocated structural tie to Berlin in the near future (see Figure 2).

The triumvirate of large Club Med countries – France, Italy, and Spain – came to the fore also in earlier research in the 2000s (on cooperation patterns in Council working groups before and after the 2004 enlargement), but is not commonly celebrated. [6] Unjustly so, as ECFR’s EU28 Survey reveals. Since the Brexit referendum, the triangular relationship between France, Italy, and Spain has proved to be the most solid of the trilateral constellations, with strong reciprocal ties among all actors (see Figure 2). With the actual goodbye to the UK is coming ever closer, this will prove to be a robust partnership. with strong structural ties lacking between the UK and the Mediterranean heavyweights (see Figure 2), this relationship is ‘Brexit-proof’.

In the past, smaller member states have levelled a variety of accusations at the Big Six: of stitching up formal EU meetings behind closed doors, forming a clique and violating the principles of European cooperation.[7] In whatever constellation they might cluster, therefore, the remaining five heavyweights will need to bear in mind that teaming up together to drive forward EU integration could, in fact, turn out to be counter-productive.

Disclaimer: the ECFR data have been fed into Ucinet using the Netdraw function to draw figures 1 and 2.

Naurin, D. and R. Lindahl (2008) ‘East-north-south: coalition-building in the Council before and after Enlargement’ in: D. Naurin and H. Wallace. (eds.), Unveiling the Council of the European Union. New York: Palgrave Macmillan, 23-35.