As Europe prepares for a tumultuous election year, Croatia faces many of the same challenges as the wider European Union. Two trends define the country’s political moment. The first of these is the collapse of the left, represented by the Social Democratic Party (SDP), and the likely implosion of the bipolar political system that has been in place since shortly after Croatia became independent, in the 1990s. The second trend is the surge in support for populists and Eurosceptics – especially the Human Wall party, which is now the second largest political force in the country according to the most recent polls in December 2018.

The SDP’s decline stems from internal disputes, as well as a lack of leadership and clear political vision. As the champion of the Croatian left drifts towards the margins, Human Wall has successfully capitalized on the political vacuum created in the wake of the SDP’s collapse. Human Wall is an anti-EU party par excellence: its leadership regularly calls for Croatia’s exit from both the Union and NATO and agitates against the introduction of the euro in the country.

The Prime Minister Andrej Plenković’s pro-European, centre-right Croatian Democratic Union (HDZ) has benefited from the decline of the SDP, consolidating its position as the strongest political party in the country (with 28.9 percent of the vote according to the latest Crobarometar poll). The paralysis of the SDP has largely shielded the HDZ from mainstream criticism throughout 2017 and 2018, a period plagued by some of Croatia’s biggest economic and political scandals in recent memory – including those surrounding retail firm Agrokor and shipbuilder Uljanik. However, Human Wall has filled the vacuum to some extent, clearing the way for a showdown with the HDZ in the May 2019 European Parliament elections.

A prevailing focus on domestic issues

While Human Wall’s anti-EU agenda is gaining traction among them, Croatian voters remain predominately focused on internal affairs. Indeed, as scandals draw in more and more prominent political leaders with each passing month, Plenković is straining to hold together a fragile parliamentary majority.

This sustained period of inward focus at the expense of European and broader foreign policy can be seen in the findings of ECFR’s 2018 EU Coalition Explorer: Croatia has failed to gain a significant role in European policy matters in the eyes of its perceived key partners. Given that it has been unable to establish itself as a trustworthy ally among those it perceives as vital to promoting its foreign and EU policy interests, Croatia appears to misunderstand its position and network of alliances within the EU.

This disconnect stems from the fact that the country has spent the last few years dealing with domestic crises linked to snap elections and parliamentary reshuffles, as well as the unprecedented Agrokor and Uljanik controversies. The country’s low scores in a range of Coalition Explorer metrics indicate that political myopia has cost Zagreb influence, relevance, and visibility within the bloc. 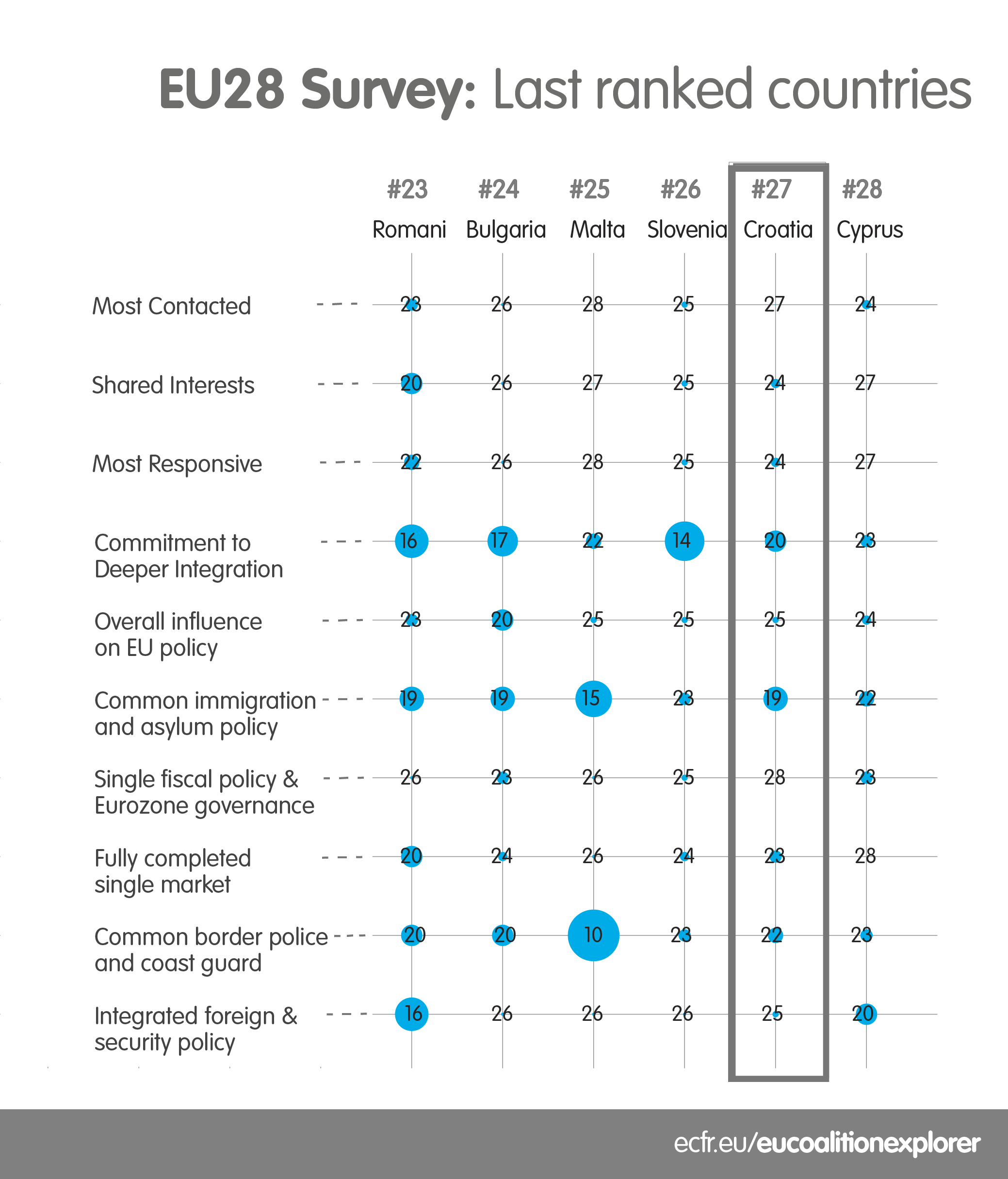 Greater attention to the EU?

According to recent polls, the HDZ is likely to win five seats in the next European Parliament elections, with the SDP gaining three seats, Human Wall two seats, the Bridge of Independent Lists (MOST) one seat, and the Civic Liberal Alliance one seat. Human Wall is the party most likely to propel key EU policy issues to the forefront of the political debate in Croatia. After years of slumber on European policy, Croatia’s mainstream parties will be forced to articulate clear and convincing positions on these topics, defending the status quo of support for the European project from Human Wall’s attacks.

Thus, 2019 will be decisive for the trajectory of the EU debate in Croatia. To address the imminent challenge from Eurosceptic populists, the HDZ will be forced to engage with European issues far more energetically than it has in recent years. Only bold leadership and vision can preserve Croatia’s broad pro-European orientation in the run-up to 2020, when the country is scheduled to assume the presidency of the Council of the EU. The ruling coalition must be careful not to take the coming political clash lightly. Acknowledging that governments’ overconfidence and lack of awareness has already produced electoral upsets across Europe – from Germany and Italy to Sweden and Austria – mainstream leaders in Zagreb cannot continue along the path of least resistance. In Croatia as elsewhere in Europe, Eurosceptics know how to exploit complacency.

Robin-Ivan Capar is a media expert and policy analyst based in Zagreb, Croatia. As the head of Zagreb Office at Spitzberg Partners LLC, he covers the TMT sector, along with evaluating and supporting investments. He has been an associate researcher at ECFR since 2015.