Foreign investment in Europe has traditionally been subjected to few, if any, regulations and restrictions. In the era of the Washington Consensus, policymakers considered such investment to be beneficial to economies because it created jobs and spurred innovation, while securing access to capital and technology. However, since the mid-2010s, incursions into European markets by state-sponsored actors and “national strategic buyers” such as China have triggered rapid changes in popular views of foreign direct investment.

In the past few years, with increasing scrutiny of the motivations and ultimate ownership of foreign investors, European countries have become more attentive to reciprocity, as well as the potential security risks associated with foreign investment – particularly in relation to critical infrastructure. Foreign investment has, therefore, become a key issue for European and national security. The European Union is implementing a new investment screening mechanism, while European countries are establishing national mechanisms or bolstering existing ones.

It is difficult to strike the right balance between gaining the benefits of foreign investment and safeguarding national security. And this has become a contested topic in European countries. The balance might depend on countries’ need for investment, risk assessments, and perceived capacity to mitigate risks. Some states, particularly those in eastern Europe, are sceptical of such screening mechanisms, as they are proactively seeking out investment from abroad. Security assessments are also a potential source of transatlantic tension, as illustrated by the ongoing discussions between the United States and European countries over Huawei’s involvement in 5G infrastructure development. The dilemma is aggravated by national publics’ openness to protectionism.

Citizens are likely to see screening mechanisms as a legitimate tool, at least when governments do not apply them excessively.

Nordic countries are no exception to this. Chinese investment in these states has increased in recent years. They are attractive targets for investment because they have stable and open economies, high incomes, and relevant expertise and skills. However, in Nordic countries, the mood around Chinese investment has recently begun to shift. Parallel to developments in the EU, Nordic countries are in the process of tightening their rules on foreign investment and preparing screening mechanisms. China now figures more prominently in the annual threat assessments of Nordic intelligence services. In general, political sentiment is changing, and policy is becoming rooted in a new understanding of geopolitics.

As Nordic countries reassess their stance on inbound Chinese investment, recent events illustrate how China’s posture in the region is becoming more assertive. In Norway, telecoms company Telenor, in which the state holds a 54 percent share, opted for Ericsson over Huawei as its technology partner for 5G networks. And those who made the decision were concerned about how China would react. In Sweden, the rhetoric of the Chinese ambassador – denouncing journalists and regularly taking offence – has sparked outrage. In Denmark, there was a row after a national newspaper published a cartoon that depicted the Covid-19 virus as the five golden stars in the Chinese flag. Denmark rejected the Chinese demand for “a public apology” for the “insult”. In Finland, there have been similarly drastic changes in views on Chinese investment – the country has shifted from being an “accommodating mercantilist” to plainly concerned and critical.

The need for new policy to have legitimacy among the public is an important yet understudied aspect of the debate on foreign direct investment, particularly in relation to citizens’ perceptions of security challenges. To map attitudes towards foreign investment in general – and specifically towards investment from EU countries, China, and Russia – a research project at the Norwegian Institute of International Affairs (NUPI) recently conducted a comprehensive public opinion survey among almost 5,000 people across Denmark, Finland, Norway, Iceland, and Sweden.

It found that citizens are likely to see screening mechanisms as a legitimate tool, at least when governments do not apply them excessively. There is genuine concern about the potential negative security implications of foreign investment in some sectors, such as natural resources. And the survey also found generational differences in all countries.

Nordic states’ economies are smaller and more open than those of some larger European countries, and a higher share of their trade and investment is interconnected with global markets. For Nordic governments, the open flow of inward and outward investment has been important to attracting capital and promoting competitiveness and growth. One might, therefore, expect the general public in these countries to be more on the “economically liberal” side, favouring open economies rather than advocating strict investment controls.

Nordic attitudes towards foreign investment also differ by sector. Here, the most striking finding is that natural resources appear to have a unique status. Respondents in all Nordic countries have a much more negative attitude towards foreign investment in natural resources than in other sectors, regardless of the investor country. This may be linked to notions of sovereignty and national control – and, as such, may suggest that there is the potential for protectionist justifications of investment control regimes. At the other end of the spectrum, there is less scepticism of Chinese and Russian investment in retail than that in sectors such as in technology and infrastructure. Young respondents, especially those under the age of 35, are significantly less sceptical of investment from China and Russia than the average citizen. 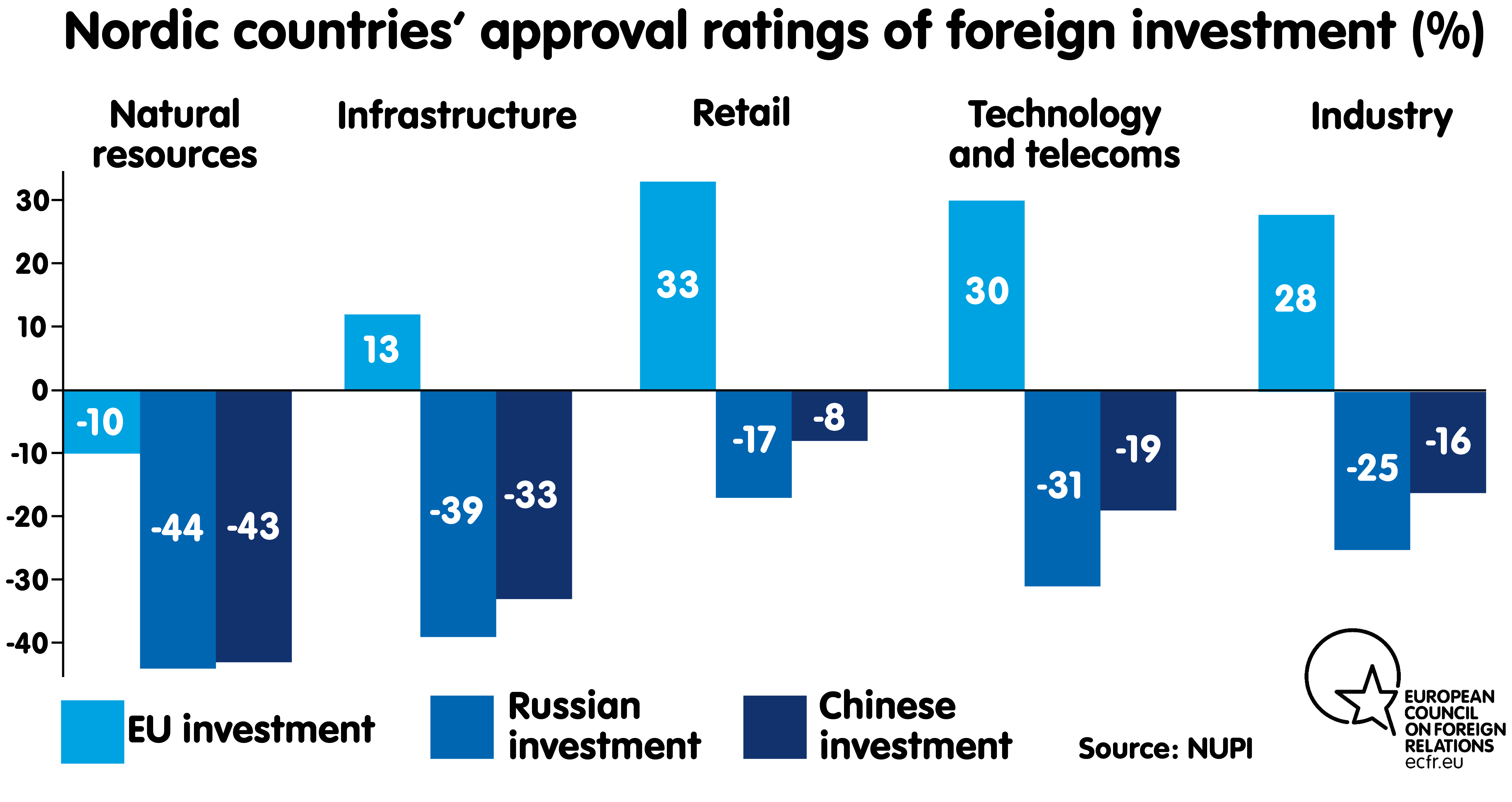 Those who expressed negative attitudes towards Chinese investment most frequently cited control over natural resources and security concerns (67 percent). Younger citizens appear to assess risks differently: respondents aged 18-22 expressed less concern than older people for either control over natural resources or security, instead citing risks related to the environment (57 percent), corruption, and working conditions as the main causes of their negative attitudes towards Chinese investment.

These findings may have implications for the European Union and Europe more broadly. Although further (pan-European) surveys are needed, NUPI’s study indicates that there is some cross-country convergence: trust in investment from other EU countries is generally high, while there are considerable security concerns about investment from Russia and China. Nordic countries are, of course, unique in some respects – yet these findings may indicate a shift towards shared assessments of potential risks and mitigation strategies across Europe.

The study’s findings also point to two specific challenges for future European policy. Firstly, there seems to be a cross-country generational divide in perceptions of the risks associated with foreign investment and various investors. In general, young people in Nordic countries are less concerned than older citizens about investors’ origin. If this pattern applies to Europe in general, policymakers should take the generational divide into account when designing and legitimising policies.

Secondly, although citizens have mildly positive attitudes towards foreign investment overall, they may be receptive to protectionist arguments of the kind put forward by some in northern Europe, particularly considering public concern about control over natural resources. For European regulators, it can be challenging to find the right balance between safeguarding security interests (in cases where an investment poses a legitimate risk) and avoiding unwanted protectionism (or the impression of protectionism). This is especially true when political leaders expand the concepts of security and critical infrastructure, using a screening regime to achieve goals outside its remit.

Due to the interdependency and integration of European economies and societies, as well as the need to share information and best practice in mitigating risks, there could be benefits in – and public support for – a more united European policy on investment screening. The results of NUPI’s survey support such a move.