The European Union is a group of countries connected by a myriad of threads that tie their continent and its people together like no other region in the world. The level of prosperity flowing from economic, political, and institutional integration is aspiration to millions of people in the EU’s immediate neighborhood and billions around the globe. Despite being so different in culture and geography, the club’s members have seemingly mastered cooperation.

In fact, the EU28’s potential for acting together is far from being fully used. Just at a time of accelerating shifts in the global order, the EU Member States’ capacity to act in unison to advance common goals has been waning, even with the many decades of successful practice in close interaction. As in the past, the EU of tomorrow will depend on the commitment of its members to it. From the technical details of crafting and implementing EU regulations to tackling a growing list of internal, regional and global headaches, the Union can only be as strong as the willingness of its member states to find common ground.

Against this backdrop, policymakers in each EU member state are under pressure to think more creatively about their country’s European EU partnerships as well as the cooperation formats and coalitions their governments engage in. Accelerated by the UK’s imminent departure from the group of 28, some Member States in the EU’s North and West have already started to rethink their country’s future role in the EU. They have started by cultivating hitherto neglected relationships and are keen to re-assess existing ones. They might be surprised how much there is to explore.

A network of unused potential

To inform this process of reflection about the future of cooperation in the EU, ECFR's Rethink: Europe project has been conducting a bi-annual series of structured expert interviews with policy professionals in government, politics, and think tanks from all EU member states. Their views and experiences are the backbone of a unique mapping of EU28 relations that illustrates the interaction patterns and attitudes between the member states’ national policy communities, their perceptions of influence and commitment to deeper integration, as well as their policy priorities and favored partners for the future.

One of the study’s main finding is the level of unused potential for closer ‘capital-to-capital ’ ties of Europe’s political establishment. This is illustrated by picturing the EU28 in its form as a network of bilateral relationships. Our data suggests that from the theoretical total of nearly 400 nodes in this network, the vast majority of bilateral ties are underdeveloped. This becomes particularly obvious when looking at EU Member States’ contact frequency, responsiveness, and shared interests — three central cooperation indicators from our inquiry (see graph below). 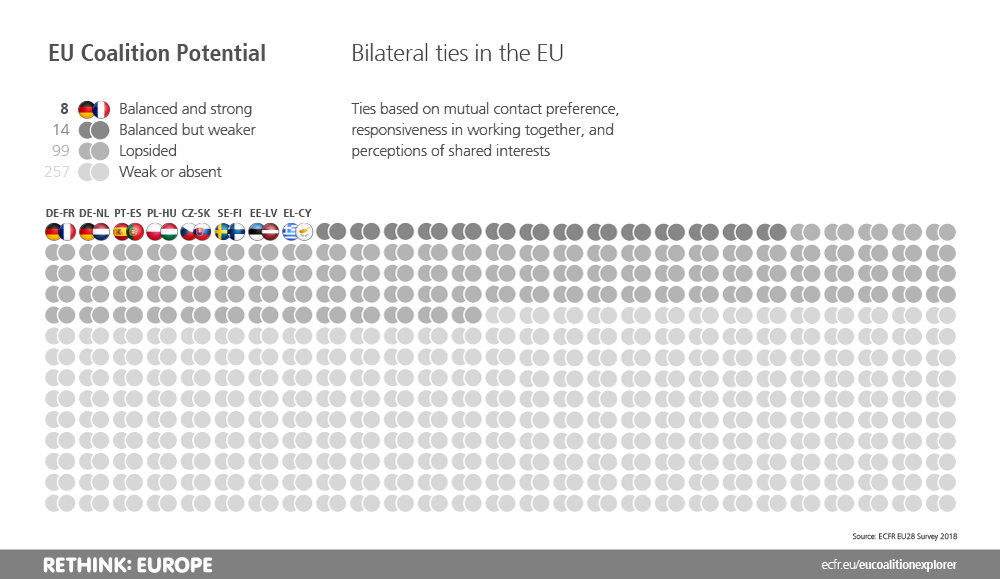 Overall, tandems showing strong and balanced relationships are as rare as they are familiar: the Czech Republic and Slovakia, Hungary and Poland, Spain and Portugal, or, far beyond the field by any standard, France and Germany. Remarkably, more than two thirds of all possible ties do not or only barely register in the data gathered from professional respondents in a process that involved hundreds of online interviews across all Member States of the EU over a period of nearly two months.

The EU of tomorrow will depend on the commitment of its members to it.

There are also only few trilateral groupings that show strong and reciprocated intra-group links. Most prominently, this pattern is visible for the three Baltic EU members Estonia, Latvia, and Lithuania, the Nordics, composed of Denmark, Finland, and Sweden, or the southern triangle between France, Spain, and Portugal. Yet all of them have their internal biases and, on closer inspection of the data, show a ‘2+1’ pattern, in which at least one link is generally not fully reciprocated and therefore lopsided, e.g. Denmark among the Nordics, Luxembourg among the Benelux, Portugal in the southern triangle, Polish-French ties in the Weimar triangle, or the Czech Republic and Slovakia in the Visegrád group that appears to be dominated by the Polish-Hungarian tandem.

There is near perfect consensus among EU policy professionals that France and Germany are still the essential pair of the EU. Both are clearly viewed as the Union’s two most influential members and are regarded to share the top spot with significant distance to the third placed country in this ranking, The Netherlands. France and Germany are also widely considered to be most committed to deeper integration, followed by Belgium in third place. The two are also most often named as the preferred partners for cooperating on a number of policy projects for which specific proposals have been part of European policy debates for several years. This includes a common immigration and asylum policy, a single fiscal policy and better Eurozone governance, as well as completion of the single market — the top three policy issues for our professional sample from a list of 18 policy projects included in the study. Across the board of cooperation indicators, France and Germany almost monopolize the top positions. This, however, is not only the result of French and German responses in the survey. Rather, it mirrors agreement across the European Union that both remain indispensable in the long run.

However, the outlook on how to get to the long run with the EU28 as a tightly knit block is dim. When looking at the top priorities European policy professionals predict their governments to pursue for the next five years, the strategic consensus appears to be rather low. Priorities and preferences differ depending on the exposure of individual Member States to the respective topic. Most countries also risk remaining rather reactive: EU-internal topics such as immigration and asylum policy and economic issues rank significantly higher than topics likely to have a much bigger impact on Europe’s long term future such as digital and climate policy.

For countries politically close to France and Germany and sharing the tandem’s commitment to deeper integration all this is no reason for complacency. Rather than waiting for Paris and Berlin to move, they can move the tandem. Their opportunity lies in building a likeminded ring of friends around the essential core of the EU28, e.g. nurturing tri- and quadrilateral relationships and engaging in new policy initiatives independently of France and Germany. This concept of ‘friends-of-friends’ in turn can bring France and Germany closer to countries that they otherwise may not engage with as frequently as with their ‘direct friends’ — whether for political reasons or mere capacity.

The challenge is to save the EU without breaking it in the process.

According to ECFR’ EU28 survey data, countries with the potential to serve as network connectors and bridge builders in this way include Denmark for linking the Nordics closer to the Benelux group, Finnish-Estonian links to strengthen Nordic-Baltic ties, Austria, standing out as a thought-after partner in its Southeastern neighborhood but being locked in its own preoccupation with Germany, and Spain as a largely pro-European anchor in the South that still generally punches below its weight. Overall, the Netherlands and Sweden, widely regarded as influential among the economically powerful EU members, rank among the best connected in the EU (see graph below).

Overall, in this effort of broadening relationships and addressing gaps in reciprocity, geography and language appear to remain major hurdles as the relatively small number of solid bi- and trilateral regional constellations discussed above testifies. This is true not only for countries in the EU’s periphery but for all . EU governments across the continent need to work on better mechanisms to increase their day-to-day cooperation beyond their immediate neighborhoods. A recent example of such an effort, stimulated by ECFR’s study, is the German Foreign Office’s ‘Like-Minded-Initiative’. Launched in September 2018, it aims to boost cooperation with specific partners from the EU27 and work with them towards their shared European interests. Germany’s diplomats identified Ireland, Denmark, Finland, and Sweden to engage first under their new initiative.

A functioning EU has always relied on its members to come together. But the EU28 of today miss much of their network potential for joint action , since a vast majority of bilateral ties appear to be underdeveloped. They also lack a sub-group of significant size and readiness to build a cooperation community to develop the Union further, irrespective of differences on detail. The old conundrum lies in moving ahead to save the EU without breaking it by doing so. Yet accepting to remain locked in stalemate and failing to equip the Union for the future now risks becoming a bigger threat for the EU than building new coalitions to experiment with.

This article was first published on the November-December 2018 issue of the ECA Journal. The contents of the interviews and the articles are the sole responsibility of the interviewees and authors and do not necessarily reflect the opinion of the European Court of Auditors.