Under the cover of business as usual, a silent revolution is taking place in German attitudes to Europe. The habitual reluctance of post-war Germans to assume responsibility, to express their preferences and to lead in their neighbourhood, is giving way to an acceptance of Germany’s special role in Europe. This new attitude is more functionalist than triumphalist, but it is underpinned by considerable confidence.

In contrast to some media coverage, this domestic confidence is reflected in attitudes around Europe. Browsing the many maps and charts of ECFR’s EU Coalition Explorer one key finding is hard to overlook: in the eyes of the “professional class” of civil servants and experts working on EU affairs, Germany is a singular player. It has the most dense networks of interactions, tops most countries’ list of ‘essential partners’, and is ranked as the most influential member in the EU overall. 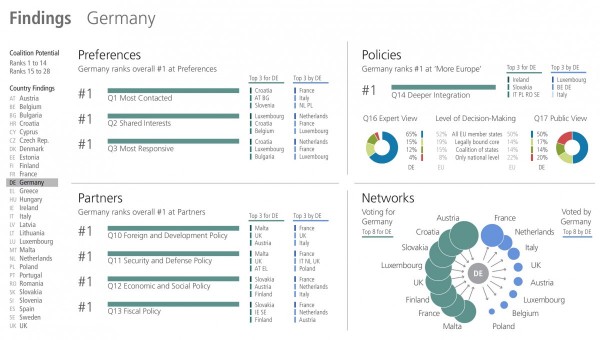 This view corresponds with the self-assessment of the German professional class. German practitioners and experts view their own country in pretty much the same terms as their peers in other member states, reflecting the new acceptance of leadership.

But whether the German public shares the professional view is another question. A comparison of three issues discussed under the banner of “more Europe” reveals a marked preference of the German public for action at the national, rather than European, level, suggesting at least a potential split between the public and elites on policy issues such as common defence structures, a European border police, or integrated foreign policy. It could be that most Germans still prefer to see themselves as a “big Switzerland”, unwilling to shoulder the burden of the largest most influential actor in the EU. 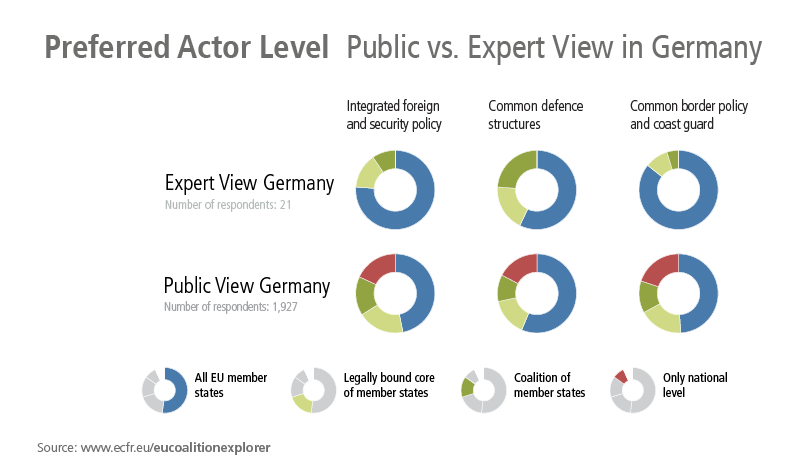 If such a split exists, however, it is likely minimal. The commitment of the German public to deepening European integration, as measured in a November 2016 Dalia Research/ECFR survey, ranks slightly above the EU average. And since then, polling data indicates a further shift in public opinion towards more pro-Europe views. According to the latest Eurobarometer data, German trust in the EU grew by 20 percentage points since the autumn of 2016, only surpassed by a 22 percentage point change in the Netherlands.

Interestingly, however, over the past decade the number of Germans believing the EU to be in ‘serious crisis’ has grown from 19 to 45 percent, according to research conducted by the German Bankenverband (federation of banks). Yet over the same period, the general view in Germany of the EU has become more positive. What is more, 53 percent would like to see closer cooperation within the EU (24 percent would prefer less and 20 percent opt for no change). Asked how they would vote in an exit referendum, 75 percent of Germans would vote to remain versus 10 percent saying they would vote leave. The remain camp would be even stronger among voters of the centrist parties, and even among the shrinking number of supporters of the right wing AfD (Alternative für Deutschland), remain would win by six percentage points.

The data suggests an interesting response to the perception of crisis. Rather than to turn inwards and seek to disengage, Germans seem to have reacted to the apparent fragility of European integration with increased support. Faced with the potential of failure or disruptions, they choose to opt in rather than seek to get out.

It now looks like the high water mark of Euroscepticism in Germany coincided with the impression of a strong and firmly anchored EU, whose centralised bureaucracy was becoming too powerful. The current EU does not convey that image, so anti-centralist trends have given way to more supportive and protective views among the German public.

Europe, it seems, will be a reason for continuity in German politics beyond the upcoming elections. Both the Christian Democrats and Social Democrats are strongly in favour of protecting and strengthening the EU; the differences among them are to be found in the fine print rather than on principle. Chancellor Angela Merkel and her challenger, chairman of the SPD Martin Schulz, are both integrationists by conviction: the former more pragmatic, the latter more passionate. As things stand three months before the elections, Europe can continue to rely on German support to move integration forward.

From a European perspective, all this is reassuring but untypical. In earlier phases of German contemporary history, the public would have been more likely to respond to crisis with the famous German “Angst”. Before 1989, the changes in Russia and the US that are taking place now would likely have deeply irritated the Germans and triggered political tumult.

In the current state of the collective mind, however, even a somewhat alarming statement by the German Chancellor, that Germans and Europeans needed to take their destiny into their own hands, was received with remarkable calm domestically. Merkel’s speech at a CSU rally in a Bavarian beer tent became a major issue only after the wave of international media coverage rolled back onto Germany. Maybe it was because the German public had heard her make similar statements before, after the outcome of the British referendum in June 2016. Even so, the coolness with which the public accepted the abdication of American leadership and the erosion of international order comes as some surprise.

It seems the “ohne mich” reflex of the 1950s, when many Germans refused to support the rearmament of the country, can finally be laid to rest in the history books. Germans today understand that the strength and stability of Europe depend on their engagement – and that taking on this task is not as scary as it once seemed.