Europe is struggling like never before. Controversies among eurozone capitals have been bitter and divisions among the leaders have become personal, but the overall rationale of actors has been to maintain the integrity of the European Monetary Union. In the midst of the refugee crisis, however, balance of the EU seems to have been lost. Divisions continue to run deep among the members of the Schengen area, but this time the outlier is not the one country suffering most – Greece – but a cluster of member states that are expressing varying degrees of discontent, free-riding, and standing in the way of attempts at coherent EU policy making.

Evidently, the level of cohesion among European societies and EU member states is not strong enough to for joint political responses. The linkage between the high level of intra-EU trade and investments, structural funds, and security cooperation on the one hand, and the willingness to engage in burden-sharing on the refugee issue on the other, is broken. Europeans are connected in many ways, but when it comes to transnational solidarity, member states find it difficult to refrain from putting their own national interest first. Apparently, practising cheque-book solidarity, as in the case of the sovereign debt crisis, is more politically feasible than making a solid commitment to others as part of a coherent response to the refugee crisis.

Once more, the linkage between cohesion and the capacity to act presents itself as a key factor in determining how effectively the EU responds to issues. Lower levels of cohesion often correspond with less willingness to cooperate, because there is less pooling of political capital at a European level. A better understanding of the sources of cohesion reveals some of the patterns underlying the level of “EU-mindedness” in European countries. Through ECFR’s Rethink:Europe initiative, we have developed a tool, the “EU Cohesion Monitor”, that examines the state of cohesion among EU member states by looking at over 30 different factors in three structural and individual dimensions. The Monitor evaluates the depth of interdependence, the degree of interaction between countries and people, and the place of the EU in peoples’ identity. Detailed results and an interactive tool to explore the findings will soon be available here.

Comparing the state of cohesion in 2007 and in 2014, the monitor shows that most of the east and central European member states have progressed significantly in terms of cohesion, while much of the attention was focused on southern Europe and its financial crisis. Cohesion grew mostly on the structural side of the monitor, notably with regard to financial transfer from Brussels through structural funds of the EU. Eastern members began to fully take advantage of their accession to the EU, with EU-transfers amounting up to more than 4 percent of national GDP; money that was translated into construction and other projects across the region. At the same time, the individual resources of cohesion – personal interaction and experiences, language skills, electoral preferences and opinions – did not follow the same positive trend. The most visible gap between structural and individual indicator scores is found in Hungary, a country that is deeply connected to the EU on a structural basis today, while being mentally estranged from it.

The animation below shows the changes in cohesion from 2007 to 2014 for all EU member states.

Hungary is a special case, however. Looking at east and central Europe at large, the EU Cohesion Monitor does show some improvement on the axis of individual identification with the EU over time, although it is much weaker than the impressive growth on the structural axis. While cohesion potential burgeoned in the east, it shrunk in the south. Here again, notable differences present themselves. Individual indicator scores for Greece fall significantly between 2007 and 2014, but the overall structural score remains high. The biggest movers are Italy and Cyprus, where both structural and individual scores fall significantly. For Portugal, like Greece – a “programme country” in deep fiscal troubles – there is almost no change in its cohesion indicator scores between 2007 and 2014. 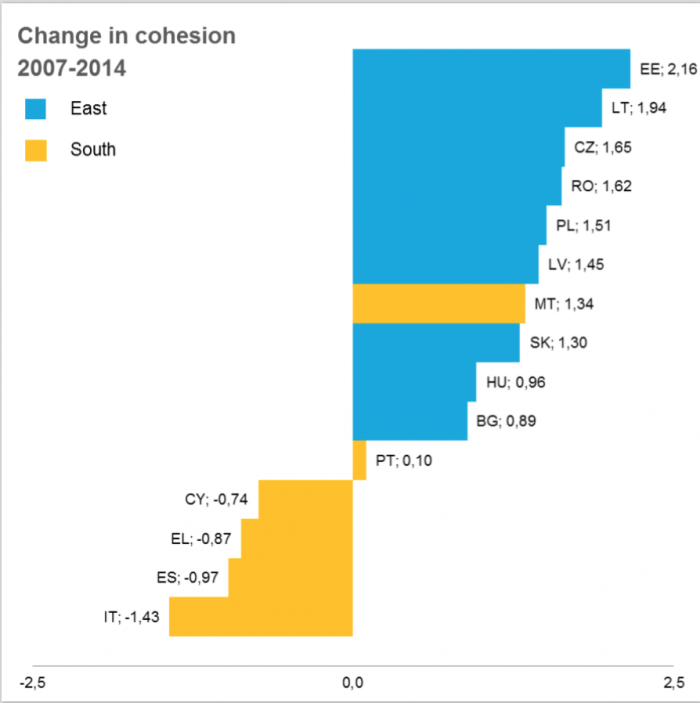 In Western Europe, the financial crisis had a sizeable impact. Ireland’s economy contracted sharply during the country’s deep banking crisis, and a bailout programme became necessary. The EU Cohesion Monitor shows declining levels on the structural indicator for Ireland, but stable numbers on the individual level. The Irish are strongly connected to other EU citizens on a personal basis, have a fairly positive view of the EU, and broadly approve of projects to encourage deeper integration. The scores in Ireland paint a rather different picture to those emerging from their closest EU-neighbour, the United Kingdom.

Cohesion profiles of Hungary and Ireland in 2014 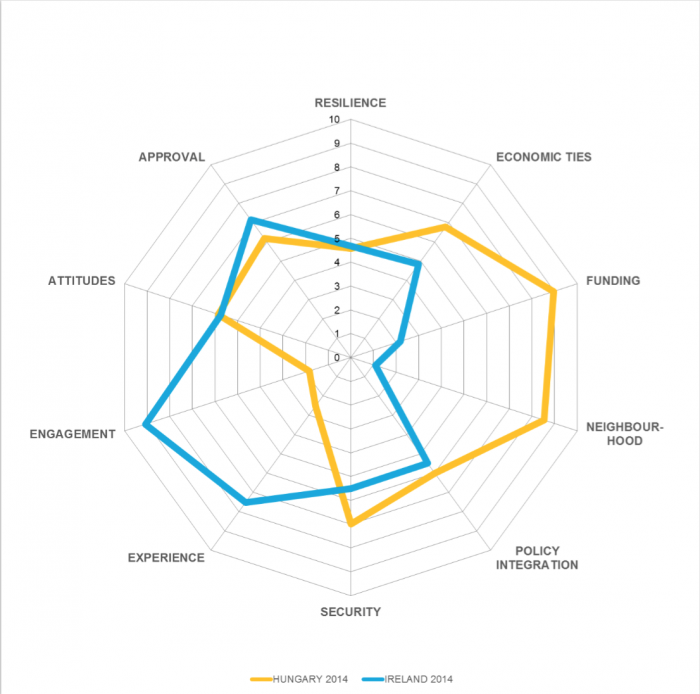 Britain is the only country among the large member states that has both a low score on structural cohesion and a low score on individual cohesion. The level of interdependence is lower, there is less interaction on both the macro and the micro levels of the European project, and less support for and approval of the EU than across the Channel. The UK scored poorly on most of the factors that would indicate a willingness to make positive contributions and cooperate. The results emerging from the UK on these issues were lower than in the Netherlands, Belgium, France or Germany. These findings do not necessarily signal that a Brexit-scenario is to be expected, but they do indicate the discontent over Europe espoused by the British Conservative party might have resonated strongly with the public. The findings of the EU Cohesion Monitor support assumptions that it will be difficult to predict which way the UK will vote in its upcoming referendum on its membership of the EU. With the UK’s ties to Europe weaker than almost anywhere else in the Union, issues unrelated to EU-membership could play a larger role.

Taken together, the findings of the EU Cohesion Monitor should raise some concern among policy makers. Almost 60 years after the Treaty of Rome, the profound changes European integration has brought about have not thoroughly transformed member states. Among the founding members, only Luxembourg really stands out. Most other member states have achieved between 40 and 60 percent of their “cohesion potential”, as measured by the monitor. The depth of horizontal integration is less than the density and duration of EU integration would suggest.

Interestingly, the data also shows that the financial crisis did not have a uniform effect on the cohesion profiles of member states. Rather than going down together countries drifted further apart, causing the sources of cohesion to differ more strongly among them. It follows that cohesion cannot easily be strengthened by taking a single approach. Any catch-all “cohesion strategy” is bound to fail as the patterns of cohesion now differ too much between EU countries. It is reassuring to find that cohesion, as measured by the Monitor, seems less volatile than expected. However, this also means that cohesion building will be complicated and take time. Over the years to come, higher levels of cohesion will hardly suffice to push ahead the EU’s capacity to act. What might, in fact, strengthen cohesion is if EU member states can prove to themselves that they can overcome the crises facing them by engaging in common action.