On 28 April, Spaniards will vote in what will be their country’s most chaotic and unusual national election to date. Whereas under the previous system voters chose between the centre-left Socialist Workers' Party (PSOE) and the centre-right Partido Popular, this weekend they will choose between several parties that together form two sharply polarised blocs. It is set to be the most divisive vote since the restoration of Spanish democracy.

The electoral campaign has been tense and conflictual to a degree unseen in Spain in the past four decades. Paradoxically, just when the country seemed to be dispensing with its two-party system, it has become more polarised than ever.

On the right, Partido Popular and Ciudadanos now jostle with the far-right Vox for votes, giving rise to hardened right-wing rhetoric. The parties on this side of the spectrum accuse President Pedro Sánchez of undermining Spanish unity and identity by pandering to Catalan separatists. They warn that, were he to remain in power, Spain would be broken up by a so-called “Frankenstein” government made up of the PSOE, Catalan and Basque separatists, and the left-wing Podemos.

Meanwhile on the left, although they have conducted slightly lower-profile campaigns, the PSOE and Podemos have nonetheless warned voters that the right-wing camp will also dismantle Spain – in this case, not its territory but its democratic system.

With no party set to secure an absolute majority, it remains to be seen which of many possible ruling coalitions – or even a hung parliament – will emerge from the vote. In such a markedly open and polarised contest that has questions of identity at its core, the results of this election will be, as Foreign Minister Josep Borrell warns, of “existential importance”.

The PSOE: currently in government with just 85 seats out of 350, projected to come in first place, and very likely to stay in power. The PSOE is set for an increase in vote share from its current 22 percent to more than 28 percent – or even 30 percent – if it continues along its current trajectory. The most favourable polls place the party at 139 seats, while others estimate that it will win as few as 112. This suggests that – unlike European countries such as France, Italy, and Greece – Spain will have a strong, well-established social-democratic party on its centre-left.

Partido Popular: ousted from government in June 2018, projected to come in second place, and likely to sustain heavy losses. The party’s current 137 seats and 33 percent of the vote share are likely to fall to 84-100 seats and 20 percent – or perhaps even less, judging by the most recent polls. Party leader Pablo Casado is desperately trying to appeal to voters who gave Mariano Rajoy, his predecessor and the former prime minister, an absolute majority in 2011. Yet Casado’s party is massively haemorrhaging votes to both Vox and Ciudadanos.

Podemos: currently in third place, with 71 seats and 21 percent of the vote. The party will suffer heavy losses due to its territorial fragmentation, internal purges, and alignment with secessionists in Catalonia. The party is currently polling at 11-13 percent and support for it is falling, which could leave it with as few as 28-32 seats.

Vox: the big story of this election and comparable to radical right-wing forces that have emerged elsewhere in Europe since the 2015 migration crisis. However, Vox’s growing popularity stems more from a response to the secessionist movement in Catalonia, which has reinvigorated Spanish nationalism. Vox currently polls at between 10 percent and 21 percent of the vote, a substantial share for a newcomer.

Around 30 percent of Spanish voters will not decide who to support until the last minute. They face a dilemma in whether to back a party due to its attitude towards Catalonia or to its positions on the policy issues that traditionally divide the left and the right. The emotionally charged Catalonia issue may lead right-wing voters to support Vox out of nationalist sentiment and left-wing voters to avoid backing the PSOE or Podemos – both of which came to power with the backing of secessionists.

Pollsters confess that they face a major challenge in adequately identifying potential Vox voters. It is unclear whether the party can expand beyond its current voter base (traditional Partido Popular voters who are angry about Catalonia) and attract less ideological but more disenchanted voters (lower-middle-class citizens in cities and rural areas who worry about unemployment, immigration, and taxes – akin to supporters of the gilets jaunes in France or the League in Italy).

The aftermath of the election

No party will come close to winning an absolute majority. The election has four possible outcomes:

The right-wing bloc may command almost 47 percent of the popular vote, but without gaining the 176 seats required for an absolute majority. This is because the electoral system, which covers 52 districts of very different sizes, penalises the fragmentation of parties’ support across small or medium-sized provinces. In large districts where ten or more seats are elected – such as Madrid or Barcelona, which elect 26 and 31 respectively – the system provides something close to proportional representation. But there are many provinces in which voters elect just 2-5 MPs, a situation that strongly favours large parties.

Therefore, a difference of just one vote can shift a seat away from, for instance, Vox or the PSOE. Small changes in nationwide vote share could produce wild variations in the allocation of parliamentary seats. The current safety zone for Vox and Podemos is 15 percent; if they fall below this, their votes will be transferred with unforeseen consequences.

This bloc advocates an increase in the minimum wage, taxes, and social expenditure, as well as softened budgetary constraints for national and regional governments, tougher rules on digital platforms such as those of Airbnb and Uber, and intervention in the housing market to cap rents in big cities.

The bloc could face two difficulties in gaining an absolute majority. One is that Podemos may be too weak to help the bloc. The other is that Catalan secessionists, especially right-wing radicals who support former regional president Carles Puigdemont, are unlikely to back the government unless they are promised a referendum on independence. The snap election is taking place precisely because they refused to help Sánchez pass a budget without the promise of a referendum.

Scenario 3: A centrist government comprising the PSOE and Ciudadanos

This bloc may gain power if the others fail to come to an agreement on working together. It is likely to command an absolute majority if the PSOE continues to perform well and Partido Popular and Vox fail to take votes from Ciudadanos. The PSOE and Ciudadanos agreed in 2016 to try and form a government, suggesting that they can overcome their policy differences.

This centrist coalition would help halt Spain’s political fragmentation and polarisation, allowing the country to pursue a much-needed reform agenda on issues such as pensions, education, and taxes, and to limit the budget deficit. However, the parties could only form a coalition if they reached an agreement on the issue that currently divides them most: Catalonia. The subject has poisoned the political debate in Spain, introducing a hostility into public discourse that surpasses traditional disagreements between the left and the right. Having relied on secessionists to become prime minister, Sánchez will have to publicly break with both them and Podemos – which may split the left in two once again.

There remains a possibility that no bloc will achieve an absolute majority, forcing them to call for another election.

The likelihood of a PSOE victory

The PSOE is likely to win the election and to stay in government – but with whose support remains to be seen. The outcome depends on two big unknowns: the strength of Vox and the degree to which left-wing voters mobilise to stop the party. It is possible that either the sides will cancel each other out or, alternatively, that one will ultimately prevail. 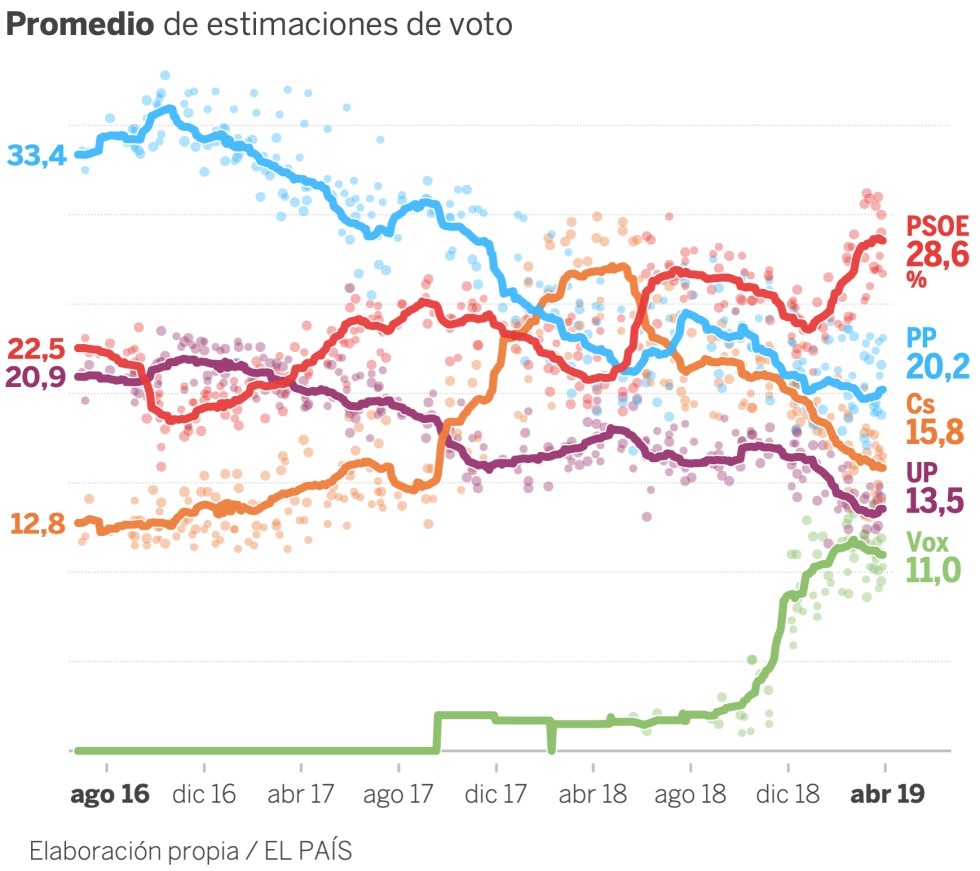