Like many countries, Estonia had a difficult 2018. A successful EU presidency in 2017 raised Estonians’ expectations that their country could play an important role in European integration in the future. However, ECFR’s 2018 EU Coalition Explorer shows that this is not easy to achieve – because, even when European policy experts largely view Estonia as a responsible and devoted member of the union, most other EU countries do not mention it as a potential coalition partner. The exceptions to this are its closest neighbours: Latvia, Lithuania, Sweden, and Finland. At the same time, in its currently unstable security environment, Estonia needs as many allies among EU member states as possible: Estonians are all too aware of the need to confront Russia’s aggressive attempts to restore its global power and to coerce neighbouring countries. 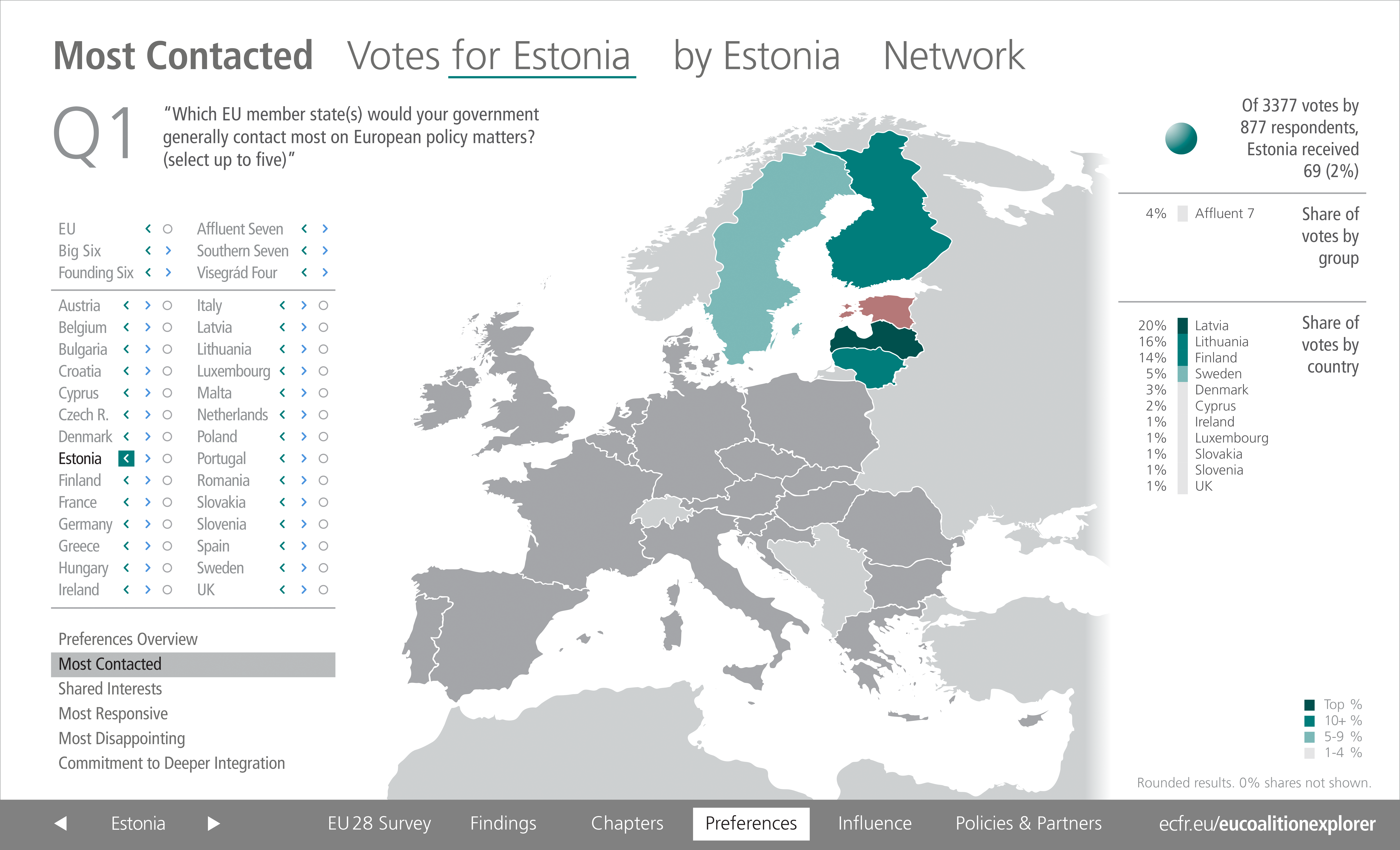 Today, one of the main challenges Estonia faces is to increase its credibility and influence in the union. As a small, innovative country with limited human and financial resources, Estonia must find its niche. There are several policy areas in which the country has the potential to be a leader at the EU level – and even globally. This applies mostly to issues related to digital society: both domestically and abroad, Estonia has extensive experience of creating advanced digital networks that interlink national information systems and databases.

Estonian expertise can be of great use in strengthening Europe’s digital society, connecting governing institutions and citizens at the EU level, and improving connectivity between European countries. These goals are no longer merely aspirational. For example, Estonian experts have long discussed the possibility of establishing a digital forum that connects their country with Finland, providing a joint platform for various public services. In all, Estonia can make its voice heard, and gain more influential allies through such initiatives.

The aspects of EU policy that concern Estonians most are immigration, economic growth, and counter-terrorism

Yet two factors could complicate Estonia’s attempts to make its voice heard – in a constructive way, of course – in the European Union in the near future. Firstly, the country has partially lost its positive image as a digital pioneer after setbacks in 2017–2018, when it was forced to replace hundreds of thousands of identity cards due to their security vulnerabilities. Furthermore, Estonia has recently dropped from eighth place to ninth place in the Digital Economy and Society Index. Estonian digital experts have stressed that the country might easily slip further down the rankings unless it invests sufficient resources in the field.

The second serious risk relates to domestic political developments. National parliamentary elections in March 2019 have significantly changed the domestic political landscape – which might, accordingly, have an influence on the country’s position in the EU. Although the centre-right Reform Party won the vote, it will be unable to form a government. Instead, the centrist, populist Estonian Centre Party, the conservative Pro Patria, and the radical right-wing Conservative People’s Party will form a governing coalition.

Although Estonian President Kersti Kaljulaid recently warned political parties not to toy with democratic values, the long-term vision of the new coalition in the EU remains unclear. Whereas all three coalition parties have stressed that Estonia will remain part of the EU, members of the Conservative People’s Party have been particularly critical of the future development of European integration. However, most Estonians strongly support the EU: according to a Eurobarometer survey published in May 2018, 69 percent of them believe that their country should remain a member of the union.

The aspects of EU policy that concern Estonians most are immigration, economic growth, and counter-terrorism. These topics will most likely be at the centre of Estonian public debate in the run-up to the May 2019 EU election.

Viljar Veebel is researcher of the Department of Political and Strategic Studies at the Baltic Defence College. He holds a B.A. and M.A. in International Relations and a doctoral degree in political science (Ph.D.) from the University of Tartu.