Its decision to leave the European Union has not only changed the fabric of Britain’s world: the decision has also led to many adjustments in relations between the remaining 27 member states. My colleague Christoph Klavehn has shown that, in the weeks following the June 2016 Brexit referendum, policymakers and policy analysts across the EU still saw the UK as maintaining stronger connections with other European countries than most member states, and as continuing to reach out to them despite its disengagement from the major issues facing the EU. In her overview of trends in relationships between member states in spring 2018, my colleague Almut Möller described a process of reorientation in which they were gradually adapting to the prospect of a different Union – one that had lost a large northern member state, a net contributor to the EU budget, a critic of deeper European integration, and an advocate for countries outside the euro and Schengen areas. London would need a new strategy to remain connected to the rest of Europe after Brexit, she concluded.

ECFR’s most recent analysis of the roles of, and relationships between, member states within the EU illustrates how the UK has lost influence in Europe since 2016. This change even affects policy areas in which London has traditionally had a prominent international role and a strong reputation. According to ECFR data on relative influence, EU policy professionals generally view the UK as having fallen in the rankings of the six large member states. On a scale of 1 to 6 for influence on foreign policy, security, and defence in the EU, the UK’s score declined from 4.55 in 2016 to 3.89 in 2018. At the same time, UK professionals’ perception of their country’s influence has improved somewhat.

In 2016, respondents in the six large EU member states largely agreed about the UK’s level of influence among them. However, their views have diverged substantially since then. Only French and German respondents rank the UK’s influence as being higher than the average in this grouping. British respondents now have a much more optimistic view of the UK’s influence than their counterparts in other large countries, deviating significantly from those in Paris (-0.8) and Berlin (-0.61), and even more so from those in Rome, Madrid, and Warsaw. Moreover, the gap in rankings between France – which, in British respondents’ view, is the other major European player on security and defence – and the UK has widened. France received a score of 5.01 in 2016 and 5.39 in 2018, while the UK received a score of 4.55 in 2016 and 3.89 in 2018 – with Germany’s score changing from 4.83 to 4.80 in the period. (There are also major differences in views of France’s influence in this area: while French and German respondents gave the country a score of 5.86 and 5.73 respectively, British respondents gave it a score of 5.32, the only one below the average for the grouping.)

Data on political divisions also reveal a shift in perceptions of the UK’s influence. The country is generally more sceptical of European integration than any other member state. As the graphic below demonstrates, a large share of the British professionals who responded to ECFR’s survey would rather deal with specific issues nationally than at the EU level, and would prefer to act through informal coalitions rather than alongside all member states. 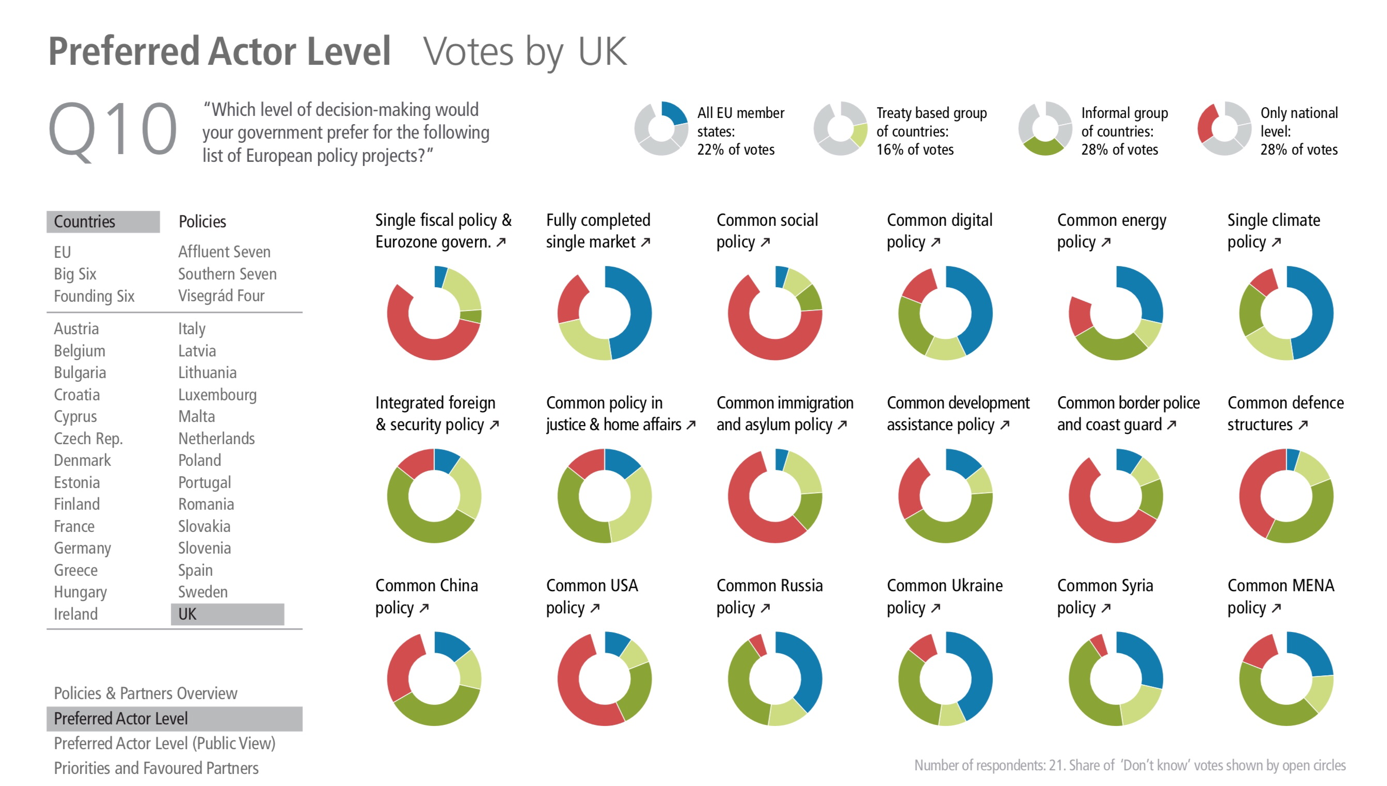 The UK’s departure from the EU reduces the potential strength of veto coalitions in a range of policy areas, including development, defence, fiscal matters, justice and home affairs, and migration and border management. In many of these areas, the UK disagrees with France or Germany (sometimes both) and agrees with Poland and Hungary – most notably, on establishing a common EU policy on the United States and on China.

ECFR’s reassessment of the UK’s perceived influence also reveals a shift within London’s traditional friends within the EU. A close look at the data on interactions between member states – particularly that related to intensity of contact, interests, and responsiveness – indicates a significant disruption in the UK’s relations with these partners in the northern tier of the EU. 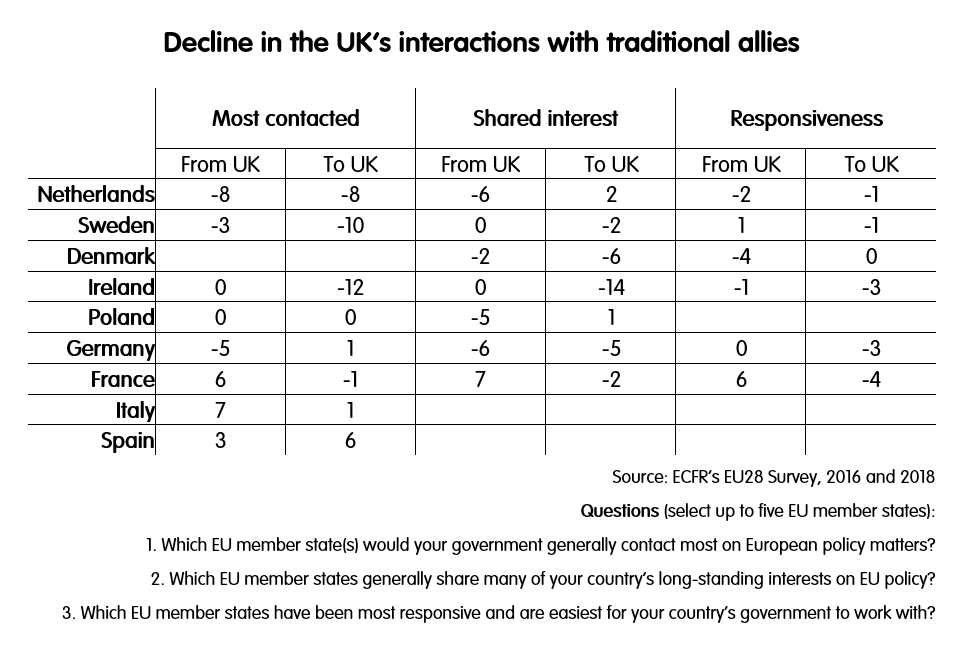 Since the Brexit referendum, the UK’s traditional partners have substantially shifted their focus away from the country. This is particularly true of the Netherlands and Germany, and, to a lesser extent, Sweden, Denmark, and Poland. At the same time, France has received greater attention from the UK, as have Italy and Spain. However, France’s attentiveness to the UK has followed the pattern of sharp decline among London’s other traditional partners. Ireland has shifted its attention away from the UK more than any other country, albeit from an extremely high level to a moderately high one. The UK’s focus on Ireland has remained moderately weak – despite Dublin’s importance to arrangements for Northern Ireland’s border, a key topic in the withdrawal negotiations.

It seems that unfulfilled expectations have caused the UK to shift its attention away from the Netherlands and Germany. Many British respondents likely believed these countries would aid the UK in the withdrawal negotiations, and were disappointed when they did not. The change in the UK’s interactions with the Netherlands, Sweden, and Denmark indicate the kind of readjustment taking place. Germany has continued to be one of two member states with which these countries maintain strongest links. Brexit will not change this, but rather raise questions about whether they can rely on Germany alone. Judging by ECFR’s discussions with Dutch and Swedish government officials, the Netherlands and Sweden seek to strengthen their links with other EU countries – especially France and other affluent smaller member states, but also eastern and southern nations.

Denmark is also adjusting in this way, albeit with a weaker base relationship with Germany and a lack of other strong, balanced partnerships. For Copenhagen, reducing the asymmetry in its relations with Sweden and strengthening its ties with the Netherlands appears to be the first priority in its post-Brexit rebalancing. Denmark’s relationship with Germany – which is striking asymmetrical, because Berlin does not focus on Copenhagen – will not improve without a more proactive Danish approach to the EU. Building on unused potential such as that in relations with Ireland could help Denmark adjust.

Meanwhile, British policy professionals generally appear to be becoming more realistic about their country’s influence in Europe. Aside from foreign policy, security, and defence, they generally view the UK as significantly less influential in the EU than France and Germany – and roughly as influential as Poland. Germany still holds the most positive view of the UK among large member states. Yet, in ECFR’s EU28 Survey, German respondents’ votes for the UK on shared interests fell from 9 percent to 4 percent, and on responsiveness dropped from 5 percent to 2 percent, between 2016 and 2018. Thus, in the past two years, Germany’s loss of faith in the UK has come to rival that of France. This, like the other loss adjustments outlined above, could make things harder for Britain after settling the Brexit deal. Negotiating a new economic and political relationship with the EU will remain difficult against the backdrop of a massive loss in reputation among its partners.