Italy’s long-standing lead role in shaping the European Union integration process has begun to fall back in recent months. The current Italian government – the result of a political bargain between the populist Five Star Movement and the far-right League – has adopted an uncertain and at times contradictory approach to the EU that risks jeopardising relations between Italy and the other member states. ECFR’s EU Coalition Explorer last year identified the country’s top three EU priorities: immigration and asylum; fiscal and eurozone governance; common border police and coastguard. However, more recent developments on the Italian political scene have already begun to challenge the Coalition Explorer’s conclusions – well-grounded at the time though they were. Such is the volatility and unpredictability of Italy’s politics today.

Particularly notable given the proximity of the European Parliament election is the government’s lack of consistent stance on the major EU-related issues of the moment. While the Five Star Movement focuses on eurozone governance, the League is ramping up its electoral refrain about immigration and asylum. This is no surprise: the compromise that helped form Giuseppe Conte’s government has led to an internally weak coalition in which electoral dynamics dominate policy priorities. Following the release of the Coalition Explorer, one of its principal researchers, Almut Möller, wrote: “Italy could well find partners in France, Germany, Spain, and others, since all three policies are generally of strong interest across EU member states.” But since then Italy’s current approach to EU matters has begun to put at risk its relationship with all three of these countries.

While the Five Star Movement focuses on eurozone governance, the League is ramping up its electoral refrain about immigration and asylum

Italy’s top policy priorities are in principle consistent with those of their main EU partners. However, common priorities do not necessarily translate into shared interests. The way that Conte’s government is framing these issues is diametrically opposed to the other EU partners and risks losing their support. For instance, Italy’s immigration and asylum policies form part of its quest for a common border police and coastguard initiative. December’s ‘Salvini decree’ removed humanitarian protection status for migrants, and represented a serious challenge to the EU’s existing policy framework. The core of its message was: Rome wants a more comprehensive EU framework in order to satisfy what it perceives as the Italian “right to demand greater solidarity on migration”. The immediate effect of the decree was the dismantling of an asylum centre at Castelnuovo di Porto, an institution of many years’ standing dedicated to the integration of more than 500 migrants. Its closure saw them dispersed to centres across Italy. The government’s decision took place just as Berlin declared its intention to abandon “Operation Sophia”, the EU maritime patrolling operation in the Mediterranean Sea, following Salvini’s decision to prevent migrants disembarking at Italian ports. 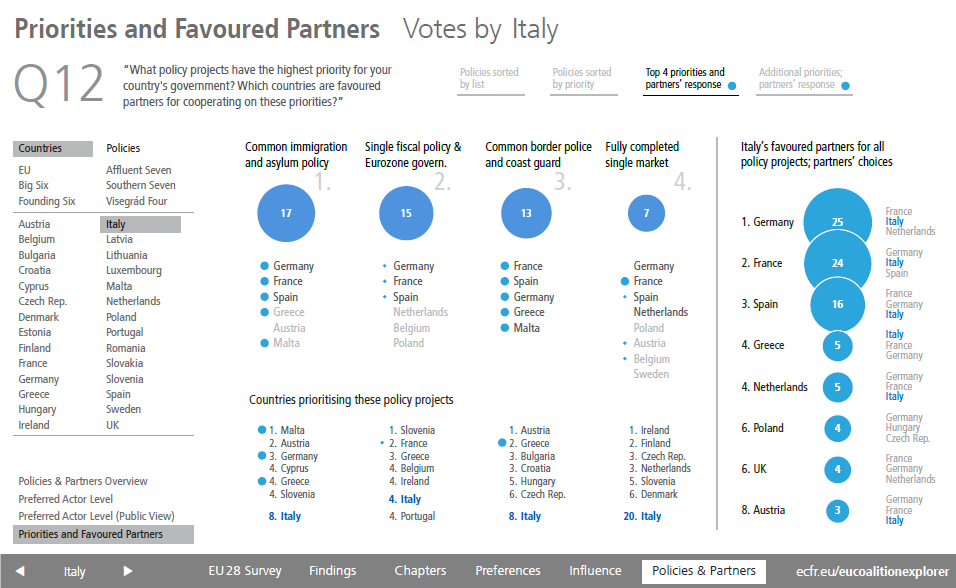 Moreover, frictions between the Italian government and its EU partners have become most evident in Italy’s relationship with France. In January the deputy prime minister, Luigi Di Maio, suggested that the CFA franc, the post-colonial currency currently used in 14 African countries and regulated by the French Central Bank, has “prevented the development of those countries and contributed to the migration of the migrants that then die in the Mediterranean Sea or disembark on the Italian coast”. This provoked a diplomatic crisis between Italy and France, with the Italian ambassador summoned to the French ministry of foreign affairs. The diplomatic crisis was further fuelled with the recall of France’s ambassador to Italy following Di Maio’s meeting with the leaders of the anti-Macron gilets jaunes, a move that France judged “without precedent since world war two.”

Conte subsequently delivered a more accommodating speech at the World Economic Forum in Davos, claiming that “the relationship of friendship” between Italy and its two main EU partners “is not at stake”. However, he also pointed to the need to change eurozone governance by creating “an EU of the people, created by the people and for the people”. Conte and Merkel held an informal bilateral in a Davos cafeteria that led the Italian prime minister to conclude that Germany would have not left the operation, but defence minister Ursula von der Leyen later confirmed Germany’s withdrawal from the operation. All this provoked angst in the Italian government, which began to fear being left on the outside. Meanwhile, Italian opposition parties accused the government of allowing the country to be sidelined in precisely this way. If Conte has been aiming to orchestrate an ‘Aachen moment’ of agreement between his country and Merkel’s, he had found neither the setting nor done the groundwork for it. His own government’s internal contradictions and approach to the EU and its member states practically strangled any rapprochement at birth.

Italy has no intention of leaving the EU and remains a strong supporter of European integration, as ECFR’s EU Coalition Explorer research shows. However, its government faces demands from the public to concentrate on domestic issues, something which helps create something of a ‘permanent electoral campaign’. Dissatisfaction with the EU project reflects a wider sentiment within the electorate, reinforced by the threat that Italians feel migration represents to the stability of their country. A report from one political think-tank confirmed that the public’s fear of migration exerts a heavy influence on how the Italian leadership talks about migrants. Thus, the coalition is now stuck in the infelicitous situation in which the EP election may become a referendum on the government itself, with the results suggesting which of the two orientations – far-right or populist – the public prefers.

Each party has the freedom within the governing coalition to continue campaigning for their own electoral promises, even where these contradict each other. The Five Star Movement will focus on eurozone governance, the League on migration. But this game comes at a cost played with EU partners; it represents a concrete risk to crucial partnerships, and a backward step in the Italian commitment to European integration.

About the author: Federico Solfrini is a PhD candidate in International Relations and East Asian Security at the University of St Andrews, with a research project on North Korea’s foreign policy.