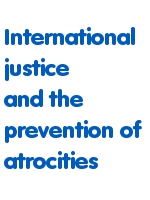 In the face of armed conflicts or campaigns of violence involving mass atrocities, the European Union and other outside countries are committed to pursue two distinct objectives. First, there is an urgent need to bring the violence to an end, either by forging a peace agreement or by helping to ensure the military victory of one side. Alongside this, however, there has grown up in the last two decades an increasing determination to ensure that those most responsible for committing atrocities are held accountable. But how far are those two objectives mutually reinforcing, and how far are they in tension?

The relationship between justice and the ending of atrocities has become a pressing question for the international community. In the face of conflicts like that in Syria, what effect would a referral to the International Criminal Court have on the prospects for a negotiated settlement? In the recent case of Yemen, was it right to accept a peace deal that incorporates an amnesty for crimes committed by the outgoing president and his regime? Should efforts to seek justice be calibrated with efforts to secure peace, or should the judicial and political tracks be kept separate? These are difficult and important questions in situations of crisis when lives are at stake, but they have received little systematic analysis from a policy perspective.

In past situations such as Libya, countries that initially supported a referral of the situation to the ICC later appeared to have second thoughts, as they began to entertain the idea of a negotiated end to the conflict. It is not always clear whether policy decisions that promote justice are made on the basis that justice mechanisms can play a constructive role in deterring atrocities, or on the ground that justice should be pursued as a goal in itself, even if it makes the ending of a particular conflict somewhat harder. It seems likely that the interplay between accountability and ending atrocities will vary in different contexts, depending for example on the nature of the conflict, the balance of power within the country and the form of international engagement with the crisis – but the relationship between these different factors remains insufficiently explored.

For these reasons, ECFR has launched a project to explore the role that justice can and should play in the international response to situations of crisis and mass atrocity. Our aim is to try to provide the basis for a more coherent and far-sighted treatment of justice and accountability in dealing with present and future crises through a systematic examination of the lessons that can be learnt from the past. At the centre of ECFR’s project are a series of 12 case studies of previous situations that we have commissioned from experts in the respective countries we are looking at. The case studies aim to provide in clear, concise and readily comparable form an examination of the key decisions and actions on justice and peacemaking in each situation, and the consequences that followed from them.

The cases that we have chosen encompass a range of different approaches – from situations such as Sudan and Libya where the UN Security Council gave jurisdiction to the International Criminal Court while the conflict was still active, to Afghanistan and Yemen where the international response unambiguously treated peace as a greater priority than justice. We also examine a range of cases such as the Democratic Republic of Congo, Uganda and Sierra Leone, where efforts to end conflict and to secure accountability were intertwined, to see what conclusions can be drawn about the interplay between these two objectives.

On the basis of the case studies, ECFR convened an international conference in The Hague in November 2013, bringing together state representatives, officials from international organisations, lawyers and analysts to explore the comparative lessons of the past. A report of the conference will be published on this website when it is ready. To conclude the project, ECFR plans to publish a policy brief with our own suggestions about the conclusions that can be drawn from past cases and the different ways that policymakers might consider approaching the relationship between justice and peacemaking in the future.

All documents connected with this project on justice and the prevention of atrocities are available at the project’s website.